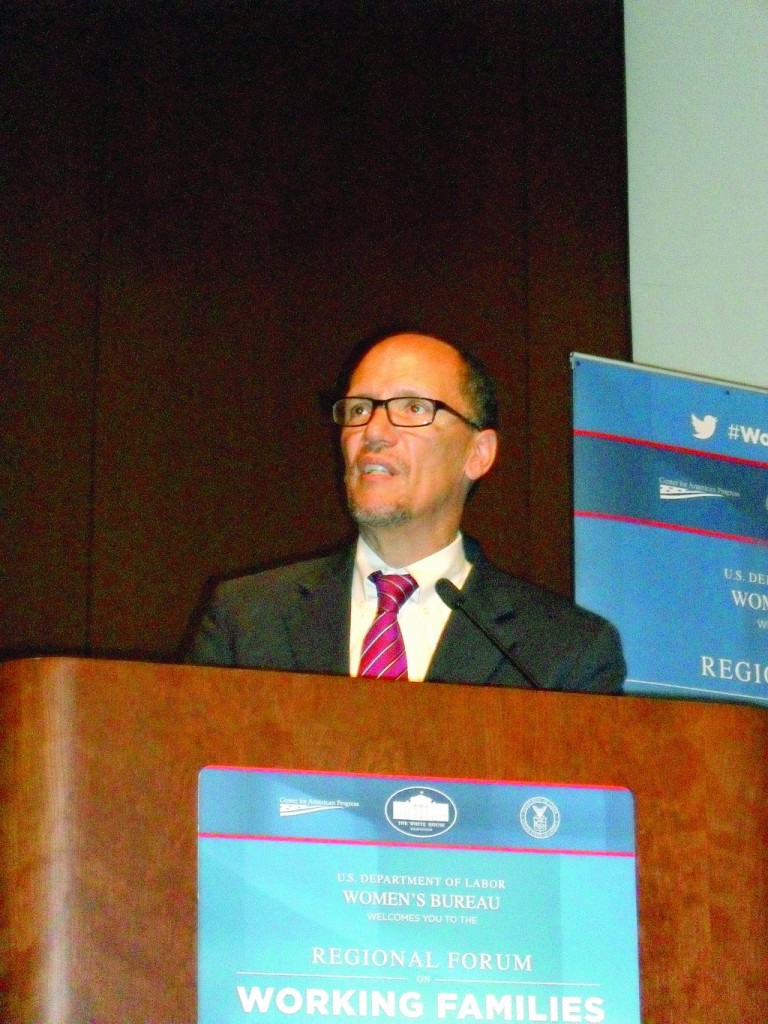 On Monday, a forum on Working Families was held in the Alexander Hamilton U.S. Custom House at Bowling Green in Lower Manhattan. It was the third of five regional forums sponsored by the White House, the U.S. Labor Department’s Women’s Bureau, and the progressive think tank Center for American Progress to be held in the spring of 2014.

A focal point of President Barack Obama’s second term has been promoting legislation that he and fellow Democrats believe will improve the lives of American workers, particularly those struggling to make ends meet, as well as female workers. To promote these policies, a national summit will be held on June 23. Leading up to the national summit, the three sponsoring entities are hosting the regional forums to share their ideas on various topics related to improving the lot of working families.

Monday’s forum featured a number of Democratic federal, state, and local elected officials and political appointees, as well as some business people, academics, and interest-group leaders.

One of the major issues the speakers addressed was raising the federal minimum wage, which the political officials argued was an important way to improve the lives of low-income earners and reduce what they said was a widening wealth gap.

“As the rich get richer, the poor get poorer, and the middle class dissipates,” said Rep. Jerrold Nadler. Nadler. “The minimum wage should be at least $15 an hour,” though the other speakers generally cited the $10.10 figure that is gaining support among Democrats, including Obama.

“People want to be self-sufficient, and they can’t be on the [current] minimum wage,” said Labor Secretary Thomas E. Perez. “Restoring wage fairness starts with passing an increase in the federal minimum wage today.

“If you work hard and play by the rules, we will make sure you can punch your ticket to the middle class; that’s the basic bargain of America.”

Perez shared stories of minimum wage workers he met — stories that he said “keep me up at night.” One minimum-wage worker said he had to choose every month between a gallon of milk and a gallon of gas. Another, a worker at Newark Airport, said he had to sadly tell his 16-year old child, “I can’t buy you anything for your birthday.”

And to promote a paid sick-leave law, Perez spoke about yet another minimum-wage worker, a fast-food restaurant employee, who said that when he missed a day of work and informed his boss that it was because he was sick, his boss said that he was fired unless he brought a doctor’s note, to which the worker replied, “But I can’t afford to go to a doctor.”

Some of the speakers said that while their ideal goal was to pass their desired legislation on a federal level, the realities of a divided Congress mean that often, reform must begin at the state and local levels.

Mayor Bill de Blasio, whose first signed bill was a paid sick- leave law, spoke about that and his other ideas. The New York City mayor cited a Pew study that showed that in recent years, less Americans are self-identifying as being part of the middle class.

“If our working families are going to succeed, we have to do things differently. An economy that is inclusive is the only kind of economy that can be stable and succeed.”

The third major issue discussed at the event was what Rep. Nita Lowey called “inequality in the workplace” — namely, that women and men deserve equal pay for equal work. Lowey said, “In New York, women make only 84 cents for every dollar a man makes.” Lowey urged the passing of the Paycheck Fairness Act, which she said would “level the playing field and eradicate the wage gap,” and thereby “improve economic security for American families.”

Valerie Jarrett, Senior Advisor to President Obama, argued — as did many of the other speakers – that these proposed reforms would not hurt businesses, but help them, and pointed to the fact that many businesses have supported them.

“The younger generation has much higher expectations” than did the previous generation about workplace equality and fairness, argued Jarrett. “If U.S. companies will remain globally competitive, they are going to have to meet workers’ expectations.”