U.S. Stocks Slip, But Hold Close to an All-Time High 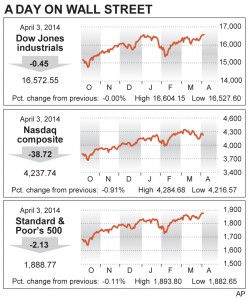 The stock market held close to its all-time high on Thursday amid optimism that the economy is set to strengthen.

Stocks are on course for their best weekly gain in seven weeks after investors got more encouraging news on the economy. A survey showed that U.S. service firms increased their business more quickly last month as new orders rose. Separate reports earlier in the week had shown manufacturing strengthening, hiring picking up, and sales of cars and trucks rising.

The news came ahead of the government’s monthly jobs report, which will be published Friday. Investors expect to see a strong pickup in hiring. Economists are forecasting that the U.S. economy added 200,000 jobs in March, according to FactSet. That would be the biggest gain in hiring since November.

“If you have a decent economy, a modestly growing economy, that’s supportive of corporate earnings and stocks can continue to benefit from that,” said John Fox, director of research at Fenimore Asset Management.

Stocks started the day higher after getting a lift from a report on the U.S. service sector, a broad category of businesses that includes banks, transportation and construction.

The Institute for Supply Management’s non-manufacturing index rose to 53.1 in March, up from 51.6 in February, indicating that growth in the service sector is picking up. The survey also showed hiring picking up.

However, by midmorning stocks started to drift lower. Investors seemed unwilling to place big bets on the market before Friday’s key jobs report.

“Going into the employment report, a lot of people aren’t anxious to open new positions,” said J.J. Kinahan, chief strategist with TD Ameritrade. “They don’t want to be taken by surprise.”

Barnes & Noble was among the day’s big losers.

After surging at the start of the year, biotech stocks have become volatile amid concerns about the cost of the drugs that they’re developing. The S&P’s index of biotechnology stocks fell 1.6 percent, paring its gains for the year to about 1.2 percent. The index had been up as much as 13 percent by the end of February.

The technology company’s new Class C non-voting shares rose $2.74, or 0.5 percent, to $569.74. Its Class A shares, which retained voting rights, rose $3.40, or 0.6 percent, to $571.50. The Class A shares, which have been traded since the company went public nearly a decade ago, now trade under the ticker symbol “GOOGL.” The Class C shares inherited the “GOOG” ticker symbol.

— Anadarko Petroleum jumped $12.55, or 14.5 percent, to $99.02 after the company announced that it had reached a $5.15 billion deal to settle claims arising from the 2009 bankruptcy of paints materials maker Tronox. A U.S. bankruptcy court judge said in December that Anadarko Petroleum may be liable for between $5 billion and more than $14 billion in the legal battle.

This article appeared in print on page 8 of the April 4th, 2014 edition of Hamodia.