COMMENTARY: US Companies Are Chipping Away at Retiree Health Benefits 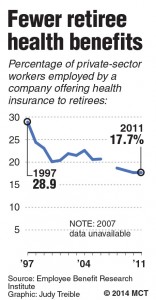 Throughout a bitter winter, burly linemen gathered at daybreak around tiny fire pits on a street in front of where they’ve clocked in to work for years.

In good weather and bad – particularly bad – these were the men who climbed up utility poles to keep the power flowing to the people of Altoona. It was hard work, but it paid well, helped these men build a life in the middle class, and allowed them to look forward to secure retirements.

Now, locked out of their jobs since Thanksgiving in a contract dispute with Penelec, part of powerful Ohio-based FirstEnergy Corp., their only work was on their vigil.

American politics this election year is rife with discussion about the gap between rich and poor, with talk of raising the minimum wage for those at the bottom and about those at the very top.

But in Altoona, as in much of America, it’s about the vast middle: those who work hard, play by the rules and make decent livings. Now, the rules are changing. The promise of the middle class is being broken.

Big companies are shifting their focus entirely to their stockholders. Globalization, endorsed by both major political parties, puts added pressure on the bottom line. Wages are stalled and benefits are on the chopping block.

The 142 blue-collar Penelec workers in Altoona personify this slow, persistent change in America.

“We’re coming down to two groups in this country: elites and those who have to work for them,” complained J. Merritt, 48, an 18-year employee of Penelec, who goes by his first initial. “That is not what this country was founded on. The forefathers of this country are probably flipping in their graves.”

Once a mainstay of blue-collar and government jobs, retiree health benefits are steadily disappearing.

Companies long offered them as a way of retaining workers. Now, companies are shedding those plans and the expectations they entailed.

By 2010, just 17.7 percent of American workers had employer-provided retiree health coverage, down sharply from about 29 percent in 1997, according to the Employee Benefit Research Institute, a nonpartisan study organization.

FirstEnergy started notifying employees in 2009 that the company would end its subsidy for retiree health care in 2014.

“That is not a secret; that has been told to employees and retirees for four years plus,” Penelec spokesman Scott Surgeoner said.

Even with forewarning, the change reflects an erosion of retirement security for workers who often accumulate job-related injuries over their careers.

What irks the locked-out Penelec workers most is that their company and its parent corporation are quite profitable. FirstEnergy reported $142 million in profit for the final three months of 2013.

FirstEnergy CEO Anthony J. Alexander is among the 275 best-paid CEOs in the nation, according to Forbes, with total compensation of $43.04 million in the past five years.

“What man in the world is worth that?” asked Merritt.

“The board believes it has to set pay that it considers fair or commensurate for the responsibilities of the CEO,” said Surgeoner.

At the same time Penelec workers think the company focuses too much on its CEO, some analysts say companies overall have shifted focus to their stockholders at the expense of their employees.

“Much of it has to do with the change in corporate goals … this big transformation from being focused on stakeholder values to shareholder value,” said Ed Wolff, an economics professor at New York University who’s a leading researcher on wages and income. “A lot of this has resulted in huge emphasis, almost singular emphasis, on corporate profitability, beginning around 1980.”

The Altoona-area locals were offered an 8 percent raise over three years, something that probably sounds good to many Americans. In fact, the average pay for a lineman in Altoona, said Surgeoner, is $81,500. That’s hefty in an area where $36,000 is the midpoint annual salary.

But as part of the new contract offered by Penelec, employees hired this year and onward would bear more of the burden for their pensions.

Existing employees no longer would get retirement health benefits paid by the company until they turn 65 and are eligible for Medicare. For workers who labored for decades, it amounts to making up new rules mid-game.

“It’s not changing the rules of the game; it’s a fact of financial life in today’s world,” said Surgeoner, who said the company didn’t “have the resources” to cover retiree health benefits. “We are not the first company (to end the benefits) and we will certainly not be the last.”