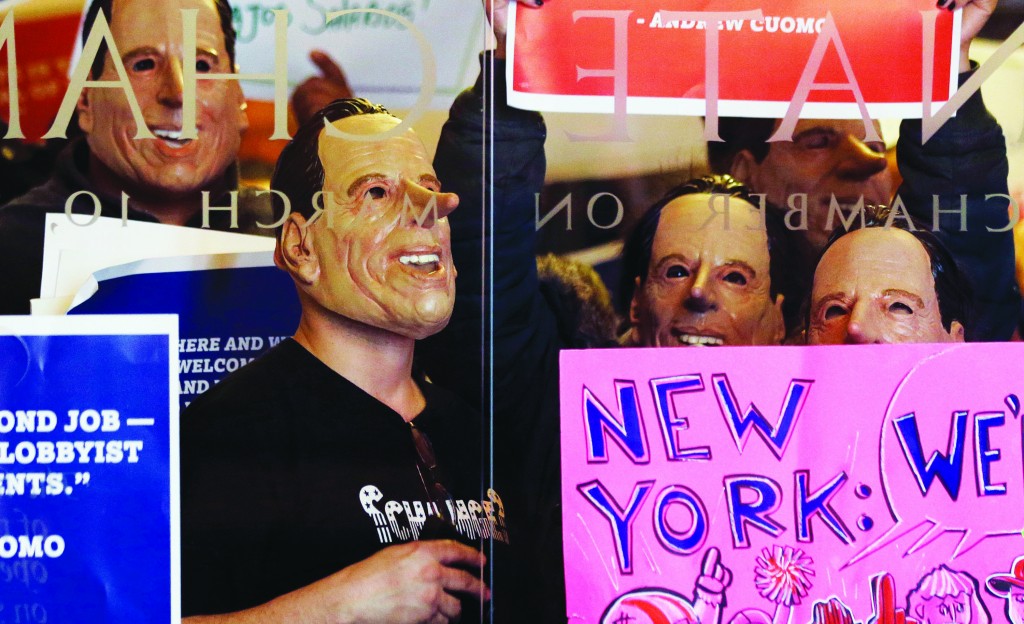 The Senate and Assembly began passing budget bills Monday afternoon, but it was unclear if they would finish before the deadline of midnight, when the state’s new fiscal year begins. A budget approved hours late on Tuesday would have little practical effect but would make it harder for Cuomo and legislative leaders to boast of passing an “on time” budget.

Gov. Andrew Cuomo and legislative leaders reached an agreement on a spending plan at the start of the weekend.

Also, an estimated $1.5 billion in homeowner tax relief is tied to local governments staying within a 2 percent tax cap the first year and enacting cost-saving plans the second year. It also would cut manufacturers’ tax rate to zero.

The deal includes a $2 billion school technology bond act to go before voters in November.

The tax cuts fortify Cuomo’s right flank in an election year when Republican hopeful Rob Astorino has been claiming New York’s tax climate is discouraging business. But the budget has left some progressive groups unhappy.

As the budget was being debated Monday, activists clogged the Capitol’s hallways to protest the lack of favored measures including publicly financed campaigns, a bill that would have opened up state financial aid to students in the country illegally as well as increased funding for charter schools. Others criticized the lack of provisions to increase or accelerate the minimum wage and tax cuts that will benefit the wealthy.

Under the budget deal, the bank tax would end, subjecting banks instead to the corporate tax, whose rate would drop from 7.1 to 6.5 percent in 2016. New York’s big investment banks would pay state taxes on securities trading based on 8 percent of net profits.

Exemptions from New York’s estate taxes would rise from $1 million to $2.06 million immediately and up to $5.25 million in 2017. The tax rate would remain 16 percent.

For caretakers of the disabled and others at state-funded nonprofits, the funding includes a 2 percent inflation adjustment in their pay starting next year, with another planned four months later.

Another provision in the budget would protect insured patients from surprise out-of-network medical bills starting in one year. It would require better disclosures from doctors and hospitals about facilities in a patient’s network and subject related billing disputes to arbitration between the provider and hospital.

The budget contains almost $138 billion for the coming year. Officials also estimate getting another $5 billion in one-time federal aid for further rebuilding after Superstorm Sandy and the rollout of the Affordable Care Act to extend health coverage to uninsured New Yorkers.