The clues keep piling up: more and more mysterious objects spotted bobbing in the southern Indian Ocean, perhaps part of the missing Malaysian airliner, perhaps not. But the satellite images that reveal these items are a glance backward in time.

Strong winds and fast currents make it difficult to pinpoint where anything is right now, and stormy weather Thursday again halted the hunt by air and sea for evidence of debris fields. The search for the plane that disappeared March 8 has yet to produce a single piece of debris — not to mention the black boxes, which could solve the mystery of why the jet flew so far off-course.

For relatives of the 239 people aboard Malaysia Airlines Flight 370, it was yet another agonizing day of waiting. 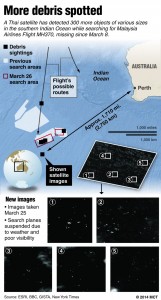 “Until something is picked up and analyzed to make sure it’s from MH370, we can’t believe it,” Steve Wang, whose 57-year-old mother was aboard the flight, said in Beijing. “Without that, it’s useless.”

Japan said it provided Malaysia with information from satellite images taken Wednesday showing about 10 objects that might be debris from the plane, with the largest measuring about 4 meters by 8 meters (13 feet by 26 feet). The objects were located about 2,500 kilometers (1,560 miles) southwest of Perth, Japan’s Cabinet Intelligence and Research Office said.

That would place them in the same general area as the 122 objects spotted by a French satellite on Sunday.

If and when any bit of wreckage from Flight 370 is recovered and identified, searchers will be able to narrow their hunt for the rest of the Boeing 777 and its flight data and cockpit voice recorders. The plane was supposed to fly from Kuala Lumpur, Malaysia, to Beijing but turned away from its route soon after takeoff and flew for several hours before crashing.

Officials still don’t know why Flight 370 disappeared. Investigators have ruled out nothing — including mechanical or electrical failure, hijacking, sabotage, terrorism or issues related to the mental health of the pilots or someone else on board.

Some speculation has focused on the pilot, Capt. Zaharie Ahmad Shah, but his son, in an interview published Thursday in the New Straits Times, rejected the idea that his father might be to blame.

“I’ve read everything online, but I’ve ignored all the speculation,” Ahmad Seth said. “I know my father better.”

This article appeared in print on page 1 of the March 28th, 2014 edition of Hamodia.