A freighter used searchlights early Friday to scan rough seas in one of the remotest places on Earth after satellite images detected possible pieces from the missing Malaysia Airlines plane in the southern Indian Ocean.

In what officials called the “best lead” of the nearly two-week-old aviation mystery, a satellite detected two objects floating about 1,000 miles off the coast of Australia and halfway to the desolate islands of the Antarctic.

The development raised new hope of finding the vanished jet and sent another emotional jolt to the families of the 239 people aboard.

One of the objects on the satellite image was 24 meters (almost 80 feet) long and the other was 5 meters (15 feet). There could be other objects in the area, a four-hour flight from southwestern Australia, said John Young, manager of the Australian Maritime Safety Authority’s emergency response division.

“This is a lead, it’s probably the best lead we have right now,” Young said. He cautioned that the objects could be seaborne debris along a shipping route where containers can fall off cargo vessels, although the larger object is longer than a container.

The Norwegian cargo vessel Hoegh St. Petersburg, with a Filipino crew of 20, arrived in the area and used searchlights after dark to look for debris. It will continue the search Friday, said Ingar Skiaker of Hoegh Autoliners, speaking to reporters in Oslo.

The Norwegian ship, which transports cars, was on its way from South Africa to Australia, he said. The Australian Maritime Safety Authority said another commercial ship and an Australian navy vessel were also en route to the search area.

Satellite imagery experts said the lead is worth investigating.

“It would be very nice if you could see a whole wing floating there, then you could say, ‘OK that’s an airplane.’ When you’re looking at something like this you can’t tell what it is,” said Sean O’Connor, an imagery analyst with IHS Janes.

But another analyst said the debris is most likely not pieces of Malaysia Airlines Flight 370. There have been several false leads since the Boeing 777 disappeared March 8 above the Gulf of Thailand en route from Kuala Lumpur to Beijing. 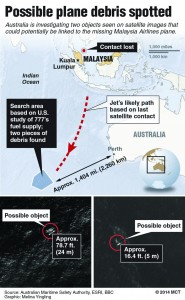 The development marked a new phase for the anguished relatives of the passengers, who have been critical of Malaysian officials for not releasing timely information about the plane. While they still hope their loved ones will somehow be found, they acknowledged that news of the satellite images could mean the plane fell into the sea.

Malaysian officials met with the relatives Thursday night in a hotel near Kuala Lumpur, but journalists were kept away. After the meeting, groups of people left, looking distraught.