Hertz Spinning Off Its Equipment-Rental Business 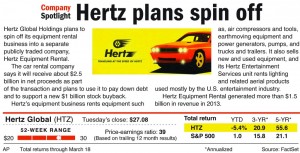 Hertz plans to spin off its equipment-rental business into a separate publicly traded company.

The car-rental company said Tuesday that it will receive about $2.5 billion in net proceeds as part of the transaction and plans to use it to pay down debt and to support a new $1 billion stock buyback.

Hertz Equipment Rental has approximately 335 branches in the U.S., Canada, France, Spain, China, Saudi Arabia and through international franchisees. It had more than $1.5 billion in revenue in 2013.

The spinoff will leave Hertz with the Hertz, Dollar, Thrifty and Firefly rental-car businesses and Donlen, which provides fleet leasing and management services. The Park Ridge, N.J.-based company has about 11,555 rental locations in North America, Europe, Latin America, Asia, Australia, Africa, the Middle East and New Zealand. Last year, the rental-car and fleet-leasing business had $9.23 billion in revenue.

Its board has approved the separation plans. Mark Frissora will remain Chairman and CEO of Hertz. The equipment-rental company will determine its management and board as separation plans are finalized.

The company’s shares are up almost 30 percent over the past year.

The company also reported its fourth-quarter and full-year financial results on Tuesday. For the three months ended Dec. 31, Hertz lost $600,000, or breakeven per-share results, versus a loss of $36.8 million, or 9 cents per share, a year ago. Excluding certain items, earnings were 26 cents per share. Analysts polled by FactSet expected adjusted earnings of 32 cents per share.

This article appeared in print in the March 19th, 2014 edition of Hamodia.