Brooklyn’s top brass of the police, fire and sanitation departments met Wednesday afternoon in Borough Hall’s cavernous atrium with dozens of Jewish groups to report on their preparations for Pesach and to hear about further needs.

Brooklyn Borough President Eric Adams, in comments echoed by his deputy Diana Reyna, introduced the assembled with his “one Brooklyn” slogan which he adopted since taking office in January.

“We’re not the greatest city in the nation, we’re the center of the universe,” said Adams, a former cop and state senator. “There are only two types of people: those who live in Brooklyn and those who wish they did.”

Commanding officers from all precincts with a Jewish presence were there, as well as representatives from the fire and sanitation departments.

Deputy Police Chief Jeffrey Maddrey, representing Brooklyn South Chief Owen Monaghan, assured the crowd that there were no threats at this time and that the department was being vigilant to ensure safety and security.

James Leonard, Brooklyn’s chief of the fire department, said that the most common injuries reported in the Jewish community before Pesach are fire related. But he said that much progress has been made over the past few years which, he said, is now showing up in the statistics.

While 15 people were hospitalized with burns in the run-up to Pesach six years ago, Leonard said, the past three years have passed without a single injury.

Henry A. Ehrhardt, the director of customer relations for the sanitation department, said that they will be sending out more trucks starting the week before Pesach.

On Sunday, April 13, the department will flood Jewish neighborhoods with an additional 36 sanitation trucks over and above the 128 regular and 68 recycling trucks. 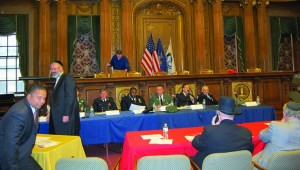 On Monday, Erev Pesach, all Jewish areas will have garbage pickups, with 250 trucks, or double the usual number, rumbling through the streets for collections.

But Ehrhardt urged residents not to wait, and to throw out as much trash as possible before the Pesach rush.

“The earlier the people could put it out, particularly the large items,” Ehrhardt said, “the easier it makes it for us.”