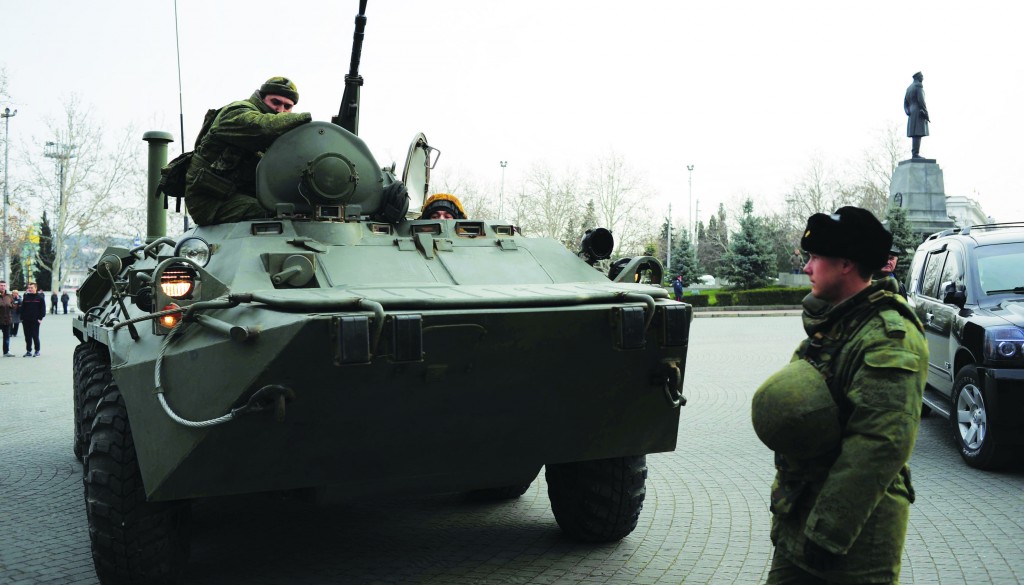 Dozens of pro-Russian protesters rallied Tuesday in the Ukrainian peninsula of Crimea against “the bandits” in Kiev who are trying to form a new government — with some even speaking of secession. A lawmaker from Russia stoked their passions further by promising them that Russia will protect them.

As a Russian flag flew Tuesday in front of the city council building in Sevastopol — a key Crimean port where Russia’s Black Sea Fleet is based — an armored Russian personnel carrier and two trucks full of troops made a rare appearance on the streets of the city.

The Crimean Peninsula — a pro-Russian region about the size of Massachusetts or Belgium — is a tinder box.

Protesters had torn down the Ukrainian flag a day ago, pleading with Moscow to protect them from the new authorities in Ukraine who have forced President Viktor Yanukovych to flee Kiev, the capital, and go into hiding.

“Bandits have come to power,” said Vyacheslav Tokarev, a 39-year-old construction worker in Sevastopol. “I’m ready to take arms to fight the fascists who have seized power in Kiev.”

Yanukovych’s whereabouts are unknown but he was last reportedly seen in the Crimea. Law enforcement agencies have issued an arrest warrant for Yanukovych over the killing of 82 people, mainly protesters, last week in the bloodiest violence in Ukraine’s post-Soviet history. 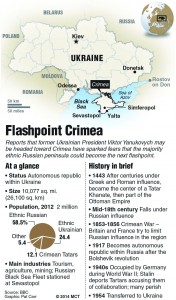 Chanting “Russia, save us!” the protesters gathered for a third day before administrative buildings in Sevastopol and in other Crimean cities. The protesters Sunday numbered in the thousands.

“We won’t allow them to wipe their feet on us,” protester Anatoly Mareta said in Sevastopol, wearing the colors of the Russian flag on his arm. “Only Russia will be able to protect the Crimea.”

Russia, which has thousands of Black Sea Fleet seamen at its base in Sevastopol, so far has refrained from any sharp moves in Ukraine’s political turmoil but could be drawn into the fray if there are confrontations between Crimean population and supporters of the new authorities.