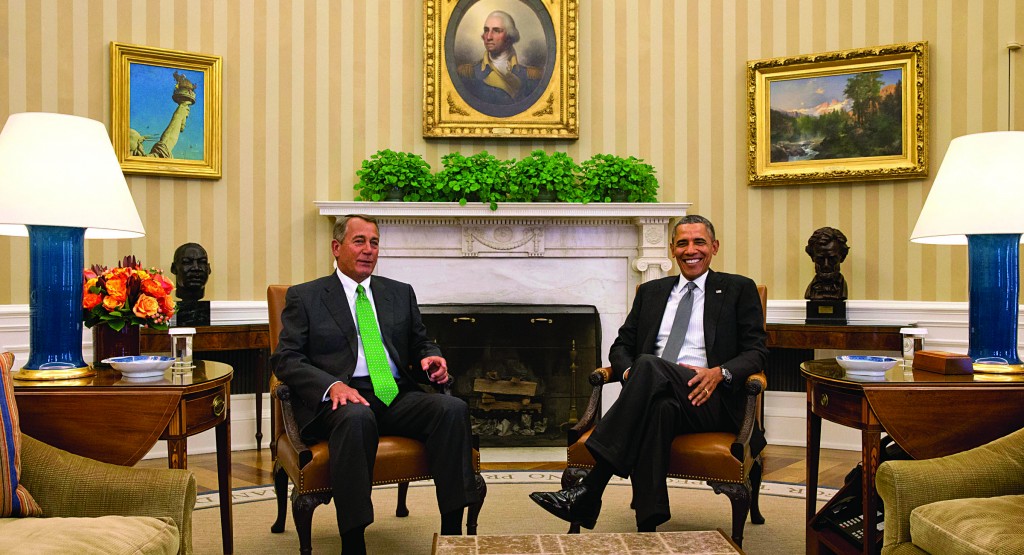 President Barack Obama and Republican House Speaker John Boehner met for about an hour on Tuesday in a rare, one-on-one Oval Office discussion between two leaders who have fought bitterly during fiscal crises over the past several years.

The meeting seemed unlikely to lead to a breakthrough in Washington’s political gridlock, particularly leading up to the November midterm elections.

The Democratic president and Republican speaker remain at loggerheads on policies ranging from job creation to the implementation of Obamacare, the president’s healthcare insurance reform.

Aides to both men said they covered a lot of ground during the meeting, talking about at least 10 topics. But aides shared little insight into what, if anything, the meeting accomplished.

“They agreed that there is a lot of work to do the rest of the year, and it is important to work together wherever we can find common ground,” a Boehner aide said.

The two leaders talked about immigration reform, which Obama wants the House to pass, but which Boehner has hinted is unlikely to get through Congress this year.

Aides said they also touched on Obama’s request to Congress for authority to fast-track trade deals, which has met with resistance from Democrats.

Obama had spoken with Afghanistan President Hamid Karzai ahead of his meeting with Boehner, warning him that he would pull all U.S. troops from the country this year unless a security agreement is signed soon. Obama talked with the Republican leader about the issue, White House spokesman Jay Carney said.

Both parties have scaled back their legislative ambitions this year ahead of midterm elections in November, when Democratic control of the Senate is at stake and Boehner’s Republicans will seek to make bigger inroads in the House of Representatives.

Tea Party conservatives in the House Republican caucus would prefer Boehner stake out a harder line against Obama’s policies, and Boehner has little to gain by seeking compromise with the White House.

It was the first time the two leaders had met alone in the Oval Office since December 17, 2012, when the two leaders sought but ultimately failed to find a “grand bargain” on tax reform and spending cuts during deficit reduction talks.

But Carney downplayed the long gap, and suggested that the two leaders may talk more frequently than is publicized.

“We don’t read out every meeting and conversation that the president has,” Carney told reporters.