Business ANALYSIS: To Raise or Not to Raise Wages?
Business 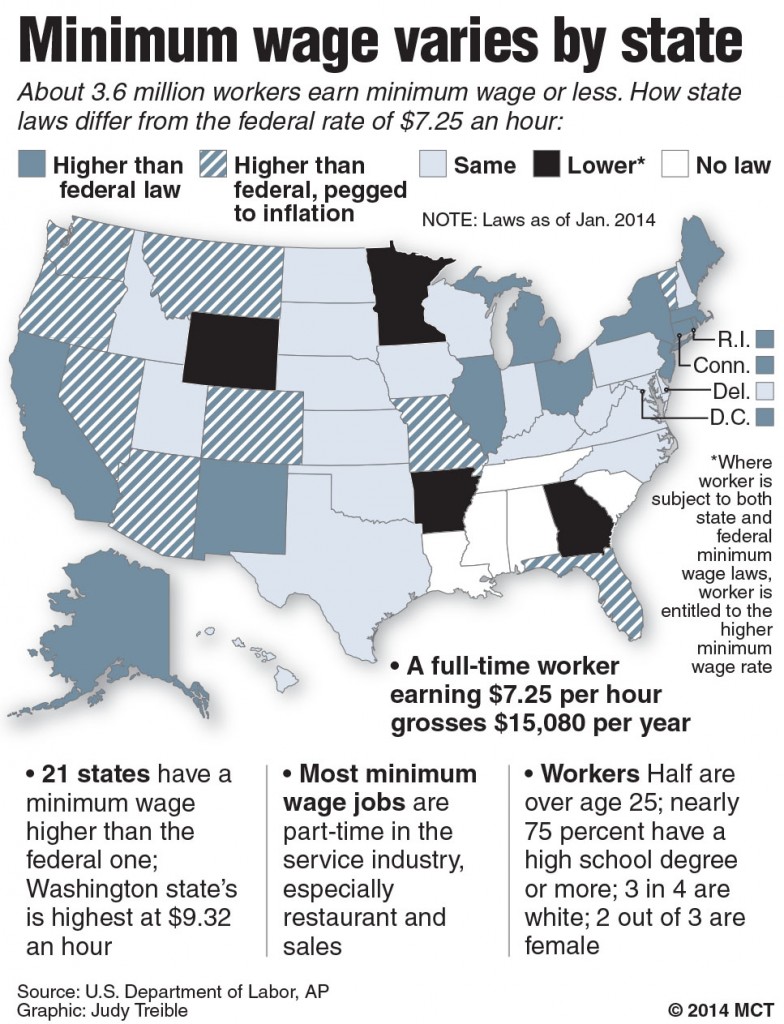 Gap’s decision last week to raise the hourly wages of workers at its stores nationwide puts pressure on other major U.S. retailers to do the same.

Following Gap’s announcement that it will set the minimum wage for workers at $9 an hour this year and $10 an hour in 2015, big store chains from Wal-Mart to Sears said Thursday that they will continue to evaluate their wages.

But ultimately, industry watchers say whether they follow Gap’s move will depend greatly on whether or not they decide that they need to in order to remain competitive.

“I think more people will wait on the sidelines and not take on additional expenses,” said Ken Perkins, president of RetailMetrics, a retail research firm. “It’s a gamble on Gap’s part.”

Gap’s move comes at a time when the plight of hourly workers has made headlines. Protests by fast-food workers asking for higher pay last year in cities across the country made front-page news. Several states are considering raising their minimum wages. And President Barack Obama is endorsing a bill in Congress that includes a proposed increase in the federal minimum wage to $10.10 an hour by 2016.

There’s no question that whatever the major players in the U.S. retail industry decide to do will have a big impact on the job market. In fact, the industry supports one in every four U.S. jobs, representing about 42 million workers.

Still, the industry has mostly shunned the idea of higher wages. The National Retail Federation, which represents some of the nation’s largest retailers, is fighting President Obama’s proposal, saying the financial burden could force them to raise prices or reduce workforce.

Indeed, the decision to raise wages is a complex one for stores. Retailers have little wiggle room. To stay competitive, experts say retailers have to offer U.S. shoppers the low prices they demand. But to make a profit, they say they must also keep labor costs low.

The issue is highlighted at a time when the industry’s profits are disappointing. Earnings for the fourth quarter, which covered the year-end shopping season, are expected to be down 5 percent compared with a year ago — the worst since the second quarter of 2009, when that figure was down 6.7 percent, according to RetailMetrics’ tally of 122 stores.

Gap Inc. has been one of the bright spots in the clothing industry, enjoying a sales turnaround that started in early 2012. The company owns the Gap, Old Navy, Banana Republic and Athleta chains, and employs 90,000 hourly and salaried workers in the U.S.

The nation’s largest clothing chain declined to give an average wage for its employees, but said that the vast majority earn more than the federal minimum wage. The company said the raise will affect 65,000 hourly workers.

Gap declined to comment on how much the pay hike will cost it, but said there are no plans for cuts in jobs or store hours or increases in prices to cover the costs.

Nancy Green, general manager of Gap’s Athleta brand, told The Associated Press in an interview Thursday that she believes some competitors can’t afford to raise wages, but “others will be inspired.”

So far, though, rivals don’t seem inspired. Target Corp.’s spokeswoman Molly Snyder declined to comment on the average pay for a Target hourly worker, but said in an email it’s “considering how best to balance the needs of working Americans while maintaining a healthy business environment conducive to job creation.”

Wal-Mart Stores Inc., the nation’s largest private employer with 1.3 million U.S. workers, said Thursday that less than one percent of its workforce is paid minimum wage. It said its average wage for both full- and part-time hourly workers is nearly $12 an hour.

“Our wages are determined on a market-by-market basis, and we continually look at them in order to remain competitive,” said David Tovar, a Wal-Mart spokesman.

Sears Holdings Inc., which operates Kmart and Sears, also said that while it offers “competitive compensation packages,” it plans to “continually monitor and evaluate our pay and benefit programs in light of business and market conditions.”