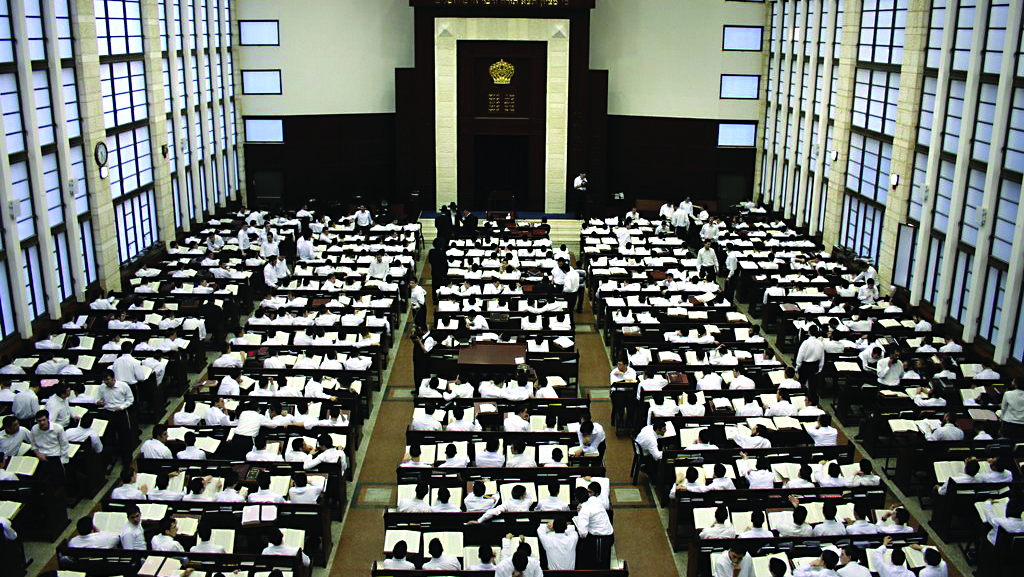 After two tense days of behind-the-scenes maneuvering, repeated delays, rumors and recriminations, the Shaked Committee tasked with formulating the new draft law approved last night a controversial clause that imposes criminal sanctions against yeshivah students who do not enlist in the army. After the final details are wrapped up in the committee, the bill will be presented for a second and third reading in the Knesset Plenum, expected to happen over the next two weeks.

A majority of the committee voted in favor of the clause, which means that lomdei Torah can be jailed for not serving in the army, after Prime Minister Netanyahu capitulated to the threats of Yair Lapid. Lapid had threatened to bolt the coalition if criminal sanctions would not be part of the law — despite the coalition agreement calling only for economic sanctions.

The two chareidi MKs on the committee, Rabbi Meir Porush of UTJ and Rabbi Ariel Attias of Shas were absent from the vote, having stated earlier in the day that “we will not cooperate with those who want to destroy Torah.” The Labor representative on the committee, MK Omer Bar Lev, abstained in the vote because two amendments that he wanted included in the law — which would make it harsher on the chareidim — did not pass.

The criminal sanctions will take effect in 2017 in the event that an annual quota of 5,200 chareidi inductees is not met.

Prior to the vote, an agreement was reached between Jewish Home’s MK Ayelet Shaked and Yesh Atid’s MK Ofer Shelach that led to the approval of the criminal sanctions. An amendment submitted by MK Elazar Stern (Hatnuah) to lengthen the service of hesder yeshivah students — who are aligned with Jewish Home — from the current 16 months to 24 months, was rejected in exchange for the inclusion of criminal sanctions for chareidi students. While Shaked abstained from voting for the criminal sanctions clause, she nonetheless agreed to bring it for a vote, knowing that there was a majority to pass it.

It should be noted that not everyone in Jewish Home was in agreement with the clause, and some tried to lobby to have it altered. At the last minute, moments before the vote, MK Moti Yogev still tried to present an amendment to the law that would give the government renewed authority to issue draft deferrals before the criminal sanctions go into effect in three years’ time. But his amendment was voted down.

After the vote took place, Yogev said he wants a revote on the entire law in the committee, and said that if it is presented as it is now to the Knesset, he will vote against it. “We will try to bring the proposed law to a better place, and if not, my friends and I will each vote in accordance with their conscience.”

Jewish Home tried Wednesday night to explain that it is a reasonable law and that the chareidi sector would be able to meet the quotas. They tried to defend MK Shaked and said that after Netanyahu had instructed that the sanctions be included in the law, she did the best she could under the circumstances.

Prime Minister Netanyahu initially had led the press to believe that he was against criminal sanctions and would not allow the law to cause a rift in the nation.

“I won’t be a part of sending Jews to jail for studying Torah,” Netanyahu had declared last week at an internal Likud function.

But under pressure from Lapid to bolt the coalition, Netanyahu ultimately threw his weight behind the criminal sanctions, and his representative on the committee, MK Tzachi Hanegbi, voted in favor of the clause.

Chareidi MKs expressed their outrage at the prime minister, who came into power and was able to govern only with chareidi support of his coalition over the years.

“Netanyahu deceived us when he met with us again and promised that there would be no criminal sanctions against Torah scholars,” said a United Torah Judaism MK. “Today he claimed that he was forced into it for political reasons, but the responsibility falls on him and only him.”

“He is the prime minister, and it is his job to be sensitive to the needs of his people,” the MK continued. “Today he wasn’t there [for us].”

The MKs also bitterly complained that Jewish Home did not live up to its promises. “Despite repeated claims that they opposed criminal sanctions, they pulled the wool over our eyes,” a senior Shas MK said. Chareidi MKs voted along with Jewish Home against extending hesder service by six months, but Jewish Home did not come through on their part of the deal, he explained.

Last night, after the vote, Yesh Atid MK Ofer Shelach triumphantly declared victory. Throughout the legislative process, he has been the most ardent advocate for the criminal sanctions. “For the first time in the history of the state, it has been decided that if the chareidim don’t enlist according to a quota established by the government, they will be subject to the mandatory draft law like everyone else in Israel,” he declared.