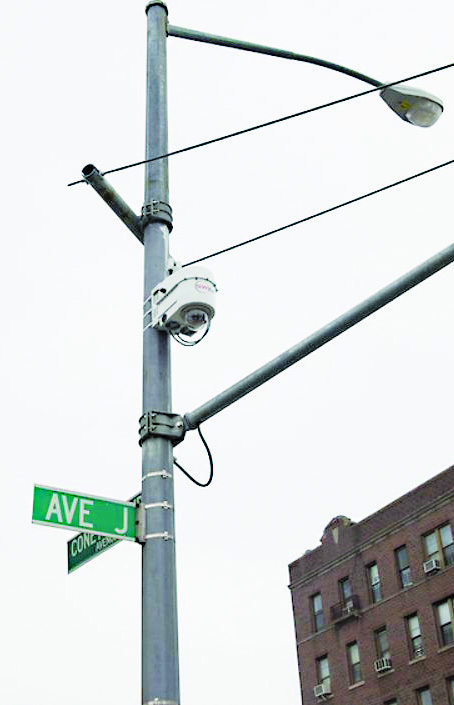 A new state-of-the-art system of surveillance cameras was unveiled Wednesday morning, an initiative that will blanket key portions of Boro Park and Flatbush with eyes to track a missing child or senior, and enable police to have better tools to catch criminals.

Assembly members Dov Hikind and Helene Weinsten, state Sen. Simcha Felder and Rabbi Chaim Dovid Zwiebel of Agudath Israel watched as Desmond Smyth, president of SecureWatch24, activated one of the systems in front of the TD Bank on the corner of Coney Island Ave. and Ave. J.

The 80 security systems — each consisting of four cameras to record on all sides — utilizes the latest technology and will be placed near key locations throughout the area that would offer the broadest coverage. These include commercial districts, schools and institutions, and also some residential areas.

For example, Hikind said, if any person were to go missing or if a crime were to be committed, the system will increase “exponentially” the ability to locate the person or catch the criminal.

The $1 million project was financed in part by JPMorgan Chase Bank and with a state grant, obtained through the efforts of the above lawmakers and Senate Majority Leader Dean Skelos (R-Rockville Centre).