Electromagnet of the Kosel

Yesterday, on 17 Adar I, a neshamah that exerted its last ounce of strength while here in this transitory world bringing tens of thousands of neshamos to their soul-roots was, itself, returned to the t’zror hachaim with the petirah of Rabbi Meir Schuster, zt”l, after a long illness.

Reb Meir was the proverbial “legend in his own time,” as he carved a mythical niche for his name in the annals of the kiruv movement as an incredibly effective recruiter for a wide array of kiruv programs, baal teshuvah yeshivos and womens’ seminaries. And while he sought out new soldiers for the milchemes Hashem in  a variety
of eclectic venues including Yerushlayim’s Central Bus Station; he was most identified with the Kosel Hamaaravi where he literally “picked them off the Wall.”

On 7 Iyar 1931, during his return voyage from Eretz Yisrael the Imrei Emes of Ger, Harav Avraham Mordechai Alter, zy”a, said this about the Kosel Hamaaravi — “Oznayim l’Kosel — this Wall has ‘ears’ to hear all our tefillos and innermost wishes!” His words proved prescient. Since its liberation from Arab control during the Six-Day War in 5727, the Kosel has been a magnet for Jews from every conceivable background and from every corner of Eretz Yisrael and the Diaspora.

Sadly, for many, the inspiration and roiling emotions that their visit to the Kosel evoked were ephemeral and basically disappeared as soon as they left the Kosel plaza. But, for fortunate thousands, Reb Meir served as an electromagnet, turning up the current of their Kosel inspiration, channeling and amplifying it until it became solidified and lasting in mosdos haTorah such as Ohr Somayach, Aish HaTorah, Neve Yerushalayim and Heritage House, to name just a few, that catered to late-beginners.

Extending warm and heartfelt invitations, cajoling and persuading, he brought countless tinokos she’nishbu out of the captivity of dominant-cultural imperialism and Torah-ignorance and carried them through the portals of the spiritual treasure-troves, to be exposed to the truth and beauty of Torah so they could reclaim their lost heritage.

Chazal teach that even after the Churban Beis Hamikdash, the Shechinah never budged from the Kosel. Between 1968, when he moved from Baltimore to Eretz Yisrael, and until the onset of his illness, almost the same could be said of Rabbi Meir Schuster. 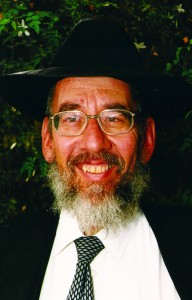 Who was this mild-mannered hero, and what was the secret of his success?

Born in Milwaukee in 1943 to Holocaust survivors, he attended public school. But his religious bubby encouraged him to switch to a local Talmud Torah, newly opened by Rabbi Dr. Abraham J. Twerski. There,  Reb Meir developed a powerful thirst and fervor for Torah study and tefillah. At 14 he enrolled in the Skokie Yeshivah. After graduating, he moved on to Yeshivas Ner Yisroel in Baltimore where, seven years later, he received semichah. After his marriage in 1968, he and his wife came to Eretz Yisrael.

One day he and his long-time chavrusa, Rabbi Chaim Kass, davened at the Kosel, where they noticed one young fellow wearing a backpack, leaning against the Wall in tears. The thought struck them both: “Why can’t someone connect with all these Jews lit up by their Kosel experience and bring them closer to Yiddishkeit?”

Rabbi Yisroel Rokowsky, Rosh Yeshivah of Ohr Somayach in Monsey, spoke with Hamodia staff about Reb Meir. “He was a very shy, self-effacing person, not likely to succeed at salesmanship but was the most successful mekarev of all time, bringing more students to all the baal teshuvah yeshivos than any other individual and mosad. But he succeeded because es is em ungegangen in leben, to him it was a matter of his own life and death.”

He illustrated this with a story he heard from one of Reb Meir’s shutfim in kiruv, Harav Noach Weinberg, zt”l.

“A nursing-home owner in Baltimore did not maintain kosher kitchens in his facilities. Rav Noach told the man that since he had Jewish patients, what he was doing was assur al pi halachah and that he had to make kosher food available to all of his Jewish patients. One stubborn Jewish woman refused and insisted on continuing to eat treife food.

“She threatened a discrimination suit and going to the authorities. Realizing that his entire parnassah was about to implode, the man, hardly a kiruv professional, influenced this woman to tzind licht, keep Shabbos and keep kosher. So it was with Reb Meir,”  Rabbi Rakowsky concluded. “He viewed any Jew lost to Yiddishkeit as his own personal ruination,” and his passion, conviction and desperation convinced others.

“Tragically, the Schusters lost an 11-year-old daughter, who was run over by an Arab motorist. Reb Meir asked the following she’eilah of the Posek Hador, Harav Yosef Shalom Eliyashiv, zt”l: ‘Since the work that I do is pikuach nefashos, may I be excused from the chiyuv of sitting shivah for my daughter in order to return to the Kosel and bring young students to yeshivos and seminaries?’

“Harav Eliyashiv was astounded, but also deeply impressed, by the she’eilah. His teshuvah was ‘B’etzem you are right. You should return to the Kosel. But it will seem bizarre — a milsa d’teimah by the olam that one would skip shivah for his own daughter.’ To show his deep haarachah of Reb Meir’s sensibilities, Rav Elyashiv, the indefatigable masmid who rarely left his limudim even for personal and family considerations, came to be menachem avel at the home of the Schusters.”

The  warm, leaping fire in Reb Meir Schuster’s heart to save other neshamos from the destructive fires of assimilation is what powered this veritable perpetual motion machine of kiruv. It was the same fire that raised his
own neshamah b’saarah  haShamaymah yesterday.

As a child, Meir was a loner, withdrawn, not mingling with the other kids. He had an insatiable desire to learn.

I taught Meir the haftarah for his bar-mitzvah. This was not easy, because Meir was tone-deaf.

Occasionally, Meir would tell me that he hears voices, and that he was getting messages from Hashem. That was thirty years before I became a psychiatrist, but even then I knew that someone who hears voices must have a serious mental problem. I am not ashamed to admit that I subsequently came to believe that Meir was telling the truth; it was Hashem talking to him.

Nothing else explains the Meir Schuster phenomenon. If anyone who knew Meir then was told that one day he would fill the baal teshuvah yeshivos, they would think it absurd. Yet it happened, and there is no rational explanation for it other than Hashem blessed him with a unique  chen, a charm which attracted people to him.

When I would come to the Kotel, I would see Meir at work, going up to a stranger and exchanging a few words, and the person followed him. Anyone else would have been told, “Take off! Don’t bother me.” But there was something in Meir that attracted people, and it can only be the special chen that Hashem gave him.

Meir exuded genuine love for Torah and for all Jews. He wanted all Jews to be close to Hashem.

Anyone who knew Meir should consider themselves  privileged to have  known a true tzaddik.

Rabbi Meir Schuster grew up in Milwaukee, Wisconsin and was not only a regular mispallel in my father’s, zt”l, shul but was a ben bayis in our home. He was the most shy and retiring person that one can imagine.

That a person with these personality traits turned out to be a pivotal person in kiruv in Eretz Yisrael  is close to unbelievable. At the same time, it teaches us that dedication and yiras  Shaymayim can break all barriers. No one who knew him as a youngster could ever have predicted that  he would become the person who returned hundreds if not thousands of alienated Jews to a Torah life.

I was told that when he lost a child and was sitting shiva that Gedolai Yisroel were seriously considering telling him to return to the Kosel because his work in hatzolas nefoshos was of such magnitude that  it outweighed the aveilus.

This article appeared in print on page 1 of the February 18th, 2014 edition of Hamodia.