Community 100s Complete Shas in a Day, 1,000s Get Hope for a Life
Community 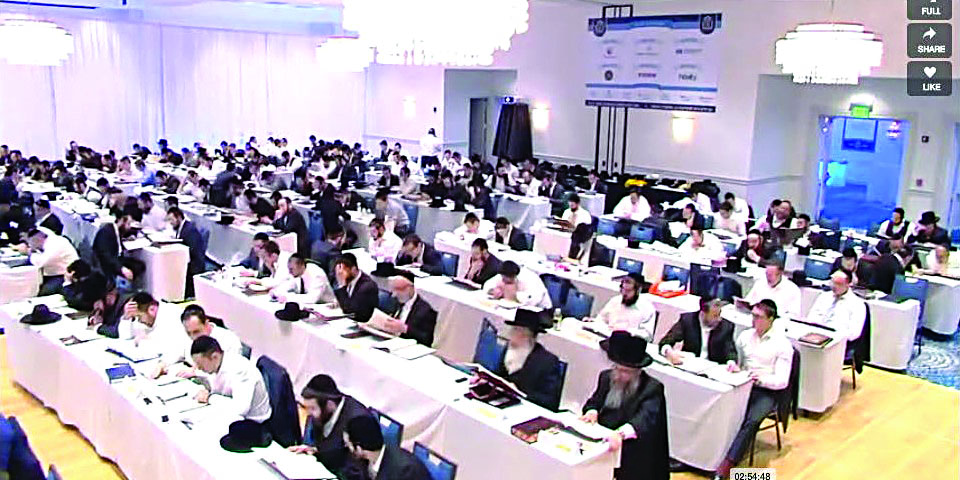 The idea to have nearly 300 yungeleit learn 10 blatt each to finish Shas in a single day under one roof was novel enough. But to have it done as a chizuk to couples waiting to be blessed with children and a fundraiser for an organization that helps them makes it historic.

The Ocean Place Resort in Long Branch, N.J., on Sunday turned into a veritable beis medrash during the day, and a banquet hall as evening turned into night, as the A T.I.M.E. Shas-a-thon members sat and learned the 10 blatt assigned to them and then celebrated the completion of all 2,711 blatt.

Chassidishe yungeleit curling their peyos sat side-by-side with Litvishe men, young Sephardi kollel yungeleit arguing with each other over the finer points of a sugya in Bechoros as retired gentlemen murmured quietly nearby as they plowed through Bava Kamma.

“Torah is meant to be given over from one generation to another,” said Rabbi Shaul Rosen, founder and director of A T.I.M.E., as seder broke for a gourmet lunch. “That is what is missing here. And by you learning Torah, they will be zocheh to have their own children.”

The goal of the Shas-a-thon was simple: get 271 people to learn 10 blatt each and make a siyum haShas — all in one day. Each learner was sponsored by other people, usually for hundreds, or thousands, of dollars.

Weeks ago, each person was given an ArtScroll Gemara to help him prepare for the event so that it would be a chazarah and not learning for the first time. Nonetheless, as the second seder commenced, people started walking around, asking if anyone wanted to give over some of their blatt to ensure the siyum happens.

Chanoch Glick, a graphic designer for Binah Magazine who was at the Shas-a-thon, said that he learned 10 blatt of maseches Eruvin, and then took an additional few blatt of Niddah from someone who was falling behind.

As night fell, preparations began for the gala siyum, with music and a seudah. Harav Dovid Ozeirey of the Yad Yoseph Torah Center in Flatbush addressed the mesaymim.

Harav Mattisyahu Solomon, Mashgiach of Beis Medrash Govoha, addressed the siyum, pronouncing A T.I.M.E., “not only an organization but a movement.”

“The last thing that we have to do is to call upon the zechus haTorah,” the Mashgiach said, referring to the learning as a zechus, “to tap into the wonderful source of life.”

But even as the atmosphere sometimes resembled a regular beis medrash, a moving address right after Minchah served to bring home the reality of what the lomdim were there for.

Sholem Kushner, who himself was one of the learners, got up and told the assembled the deeply personal story of his and his wife’s own quest for children — and A T.I.M.E.’s constant accompaniment with them throughout their difficult journey.

Mr. Kushner tearfully spoke of the tribulations that they went through, their short-lived happiness and their subsequent loss.

Mr. Kushner said that for his wife, the hardest part of the year is Pesach. But for him, he said, the biggest challenge is Simchas Torah.

“Thank you,” he said, choking up as his eyes raked the hall filled with open Gemaras and wide-eyed faces. “Thank you for making this my Simchas Torah.”