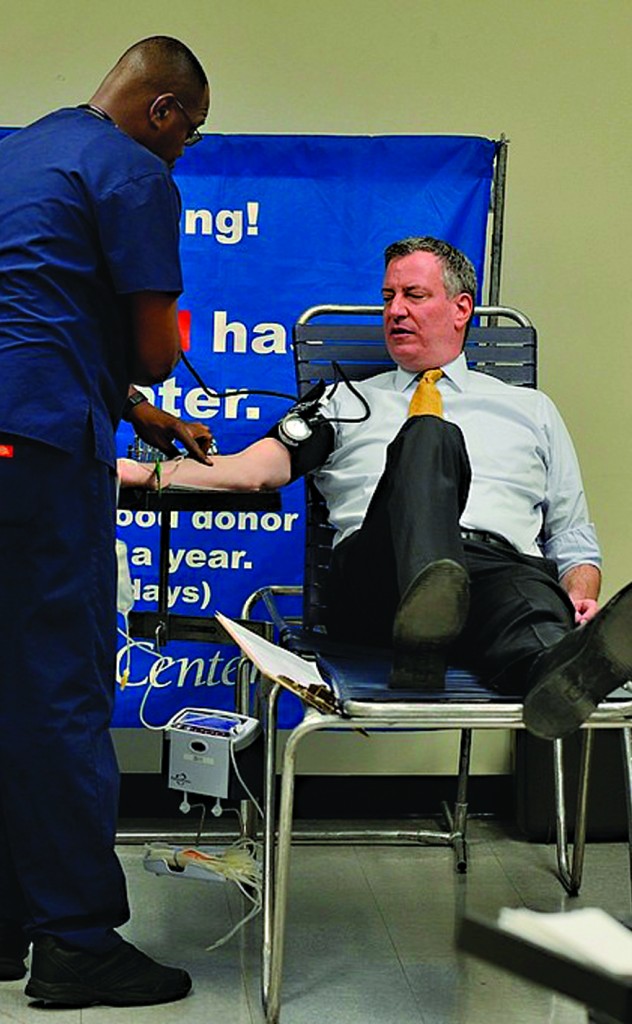 Bill de Blasio stooped his 6-foot-5 frame for hours to shake hands with regular New Yorkers touring Gracie Mansion, telling them the opulent mayoral residence was “the people’s house.” Clad in a jacket and jeans, he cheerfully posed for a media crew while shoveling snow outside his Brooklyn home.

De Blasio’s first few weeks in office have offered a look at a mayor skilled in the art of political stagecraft — with the goal, in his case, of coming across as a regular Joe and winning support for his plan to narrow the city’s widening gap between rich and poor.

“He’s brilliant about managing the intersection of images and issues,” said Matthew Hale, a political science professor at Seton Hall University. “It’s what he’s trying to do — he’s staking out an image as someone who is very much in touch with the people.”

Before running for office, de Blasio got a first-hand look at the power of political imagery when he helped Hillary Clinton stage her low-key, small-town New York state “listening tour.” That helped the then-U.S. Senate candidate soften the hard edges in her public image and dispel the notion that she was someone who thought she knew what was best for others.

Some of the lessons he learned became apparent during his underdog mayoral bid when he sought to draw a sharp contrast with the data-driven and sometimes-stiff billionaire incumbent Michael Bloomberg. De Blasio was quick with a joke — not all of them funny — and frequently placed his family at the center of his campaign.

His wife, Chirlane McCray, whom he dubbed his “moral compass,” was always at his side. His Afro-sporting son starred in a campaign ad that helped his father’s rise in the polls. And even his teenage daughter’s admission that she had battled depression and substance abuse was revealed in a gauzy video crafted by the mayor’s campaign team.

The emphasis on that stagecraft continued in the first moments of his administration. De Blasio first took the oath of office not at some glamorous location but in front of his Park Slope row house surrounded by his neighbors. And the next day’s official City Hall inauguration ceremony was choreographed to a T, starting with de Blasio and his family arriving on the subway, like so many million commuters each day. (The difference, of course, being that not every New Yorker has his arrival broadcast on giant screens to a cheering crowd that included Bill and Hillary Clinton.)

De Blasio has also sidestepped the mainstream media by employing his own professional photographer to take scores of evocative photos that are posted on the mayor’s photo-sharing site. There was a dramatic, back-lit shot of de Blasio addressing a graduating class of corrections officers and an artsy photo of him exiting a subway train as if he were a superhero bounding into action.

Other images are meant to stress his everyman appeal, including one of him racing down a toboggan course. It is impossible to imagine Bloomberg, whose team largely produced matter-of-fact, staid images of the three-term mayor, being photographed in a similar fashion.

“Part of de Blasio’s campaign was that we aren’t going to have going forward what we’ve had the last 12 years,” said Christina Greer, a political science professor at Fordham University. “His message is essentially: ‘I’m with you. I work for you, but I’m with you.’”

There have been a few missteps, however — most notably when he used a knife and fork to dig into a slice of pizza instead of the preferred New York City method of picking it up with bare hands. His team quickly posted a photo of de Blasio using his hands to consume a slice and then the mayor poked fun at himself by bringing utensils to an appearance on a comedy show.

Though de Blasio won election in November with 73 percent of the vote, in some ways, his campaigning hasn’t stopped. His signature plan, a tax on the rich to fund universal prekindergarten, requires assistance from Albany, and he has relentlessly lobbied for the proposal, not just in closed-door meetings but also with a slick website and a series of campaign-style events complete with banners and chanting volunteers handing out pamphlets.

To this point, the public seems to like what they see: The mayor’s pre-K plan is scoring high marks in the polls, and de Blasio and his family are treated like celebrities.

However, Greer warned that the reality eventually has to match the perception.

“As things get harder, as his political capital starts to wane, will people say, ‘Hey, less toboggan, more City Hall?’ They will want to see results,” she said.