An Algerian military transport plane slammed into a mountain Tuesday in the country’s rugged eastern region, killing 77 and leaving one survivor, the defense ministry said.

Air traffic controllers lost radio and radar contact with the U.S.-built C-130 Hercules turboprop just before noon and dispatched helicopters to try to find it. The plane was discovered in pieces on Mount Fortas near the town of Ain Kercha, 30 miles southeast of Constantine, the main city in eastern Algeria.

The plane was heading to Constantine from the southern Saharan city of Tamanrasset, which has a massive military presence due to its proximity to the country’s unstable southern borders. It was at least 24 years old, according to sales information supplied by its maker, Lockheed Martin Corp. The plane carried 74 passengers and four crew members, the military said in its statement, blaming poor weather for the crash.

Earlier in the day, Algerian government officials and Algerian state media had reported that the plane had 99 passengers, making for a much higher death toll.

The lone survivor — a soldier — suffered head injuries and was treated at a nearby military facility before being flown to the military hospital in Algiers, a retired Algerian intelligence officer told The Associated Press. He spoke on condition of anonymity because he was not authorized to speak to the press.

Civil defense officials at the snowy crash site said the plane broke into three parts and that women and children were among the victims. Military transports in Algeria routinely carry not only soldiers but military families and sometimes even other civilians, if space is available. 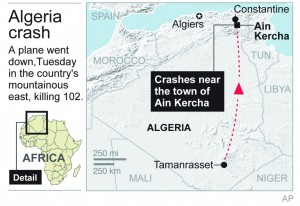 Commander Farid Nechad, who was coordinating recovery efforts, told the AP that 55 bodies had been recovered so far but conditions at the crash site were difficult.

“Unfavorable weather conditions and storms accompanied by snow in the region were behind the crash,” the defense ministry said.

The presidency announced a three-day period of mourning, calling the soldiers who had died “martyrs for the country.”

Lockheed Martin’s C-130 Hercules transport, born out of the experiences of the 1950-53 Korean War, has been used by air forces all over the world to help fight wars or save lives in humanitarian situations.

Lockheed Martin confirmed that it sold C-130s to Algeria from 1981 to 1990 and said if Algerian authorities asked, the company would work with them to investigate Tuesday’s crash. It did not release specific information on the age of the plane.

This article appeared in print on page 3 of the February 12th, 2014 edition of Hamodia.