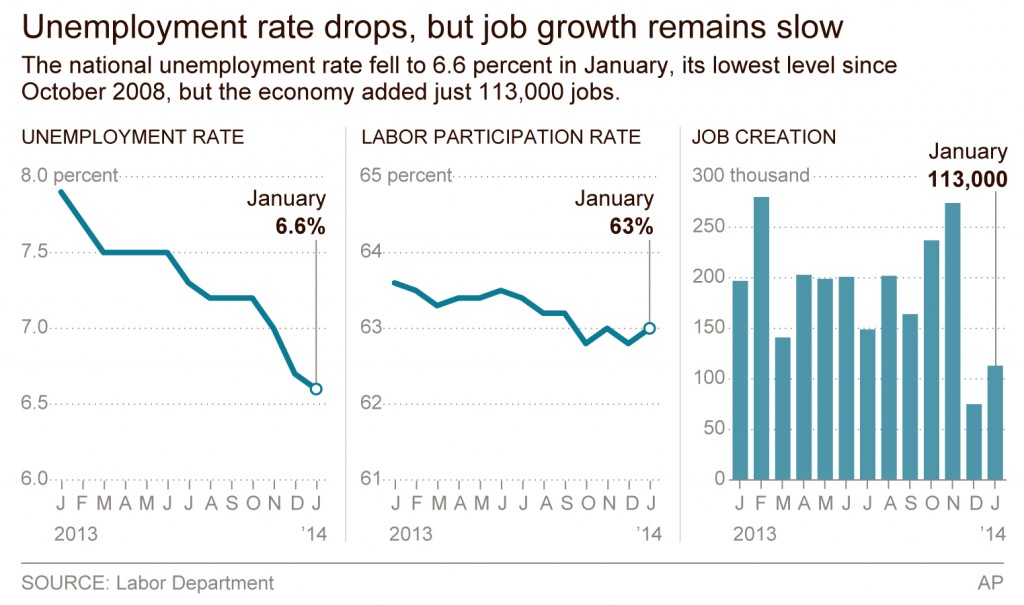 Back-to-back months of sluggish hiring suggest the economic recovery may have lost some momentum and could give the Federal Reserve second thoughts about continuing to throttle back a key stimulus program.

Employers added a modest 113,000 jobs in January after boosting payrolls by just 75,000 in December, the Labor Department said Friday. The two-month average was about half of last year’s monthly pace of job growth and far below analysts’ expectations.

The big drag in January came from government, which cut 29,000 jobs, the most in 15 months. Retailers also retrenched, raising some concerns about the sturdiness of consumer spending. And payrolls in the once-booming health care sector flat-lined again, making it the worst two-month period for employment since at least 1990.

Even so, there was a big bright spot in Friday’s labor report: The unemployment rate continued to drift lower last month — to a new five-year low of 6.6 percent from 6.7 percent in December and 7 percent in November.

The rate has dropped much faster than experts had forecast, and the latest decline was attributed to more people working last month, rather than, as in some past months, workers dropping out of the labor force.

The jobless rate is calculated from a poll of households, while payroll job changes are derived from a survey of employers. The two sometimes don’t tell the same story, and analysts generally put more stock in the larger, less volatile employer-based results.

Despite the disappointing report, analysts and investors seemed to be giving the economy the benefit of the doubt.

Economists said the latest jobs report, on top of recent signs of softer car sales and factory orders, indicates that many people were too optimistic that the economy would accelerate this year. It still should, they maintained, but probably not until later this spring or summer.

He said the economy appeared to be slowing momentarily after a fourth quarter that was stronger than could be sustained.

“That’s not anything to be too worked up about unless things slow down aggressively,” he said.

Investors seemed to focus on the positive side of the jobs report and the possibility that the Fed could hold off on reducing its bond-buying stimulus at its next meeting in March. So far, the central bank has cut $20 billion a month from what was $85 billion in monthly purchases.

The central bank in December, seeing an improved outlook in the economy and job market, decided to begin a gradual withdrawal of its bond purchases, which have been aimed at holding down long-term interest rates. Most analysts still expect the Fed to go through with another cut next month.

But that prospect, as well as the outlook for the recovery, could change dramatically should economic data continue to disappoint, especially if the February jobs report doesn’t show improvement when it’s released next month.

The number of people unemployed stood at 10.24 million in January, down 115,000 from December and nearly 2 million from a year earlier. But some workers who lost their jobless benefits at the end of December dropped out of the labor market, and thus weren’t counted as officially unemployed.

Erin White, 34, of Lebanon, Tenn., was laid off as a high school business teacher last May. Whatever the job numbers show, she said, she doesn’t see things getting much better.

“Everywhere I tried to go, they just closed the door,” said White, who is originally from Bakersfield, Calif.

Since the start of the year, White has stopped looking for work because she returned to school to get credentialed to teach at an elementary school.

White’s concern now, though, is how to manage financially until she lands a job. Her unemployment insurance payment of $274 a week, after taxes, expired at the end of last year after Congress declined to renew extended benefits.

“We’re having to go into our savings now,” said White, who is married with five children.

For now, most experts remain sanguine about economic growth this year.

Many households are in better financial shape because they have lowered their debt loads in the last few years.

Also, residential construction is expected to keep growing in step with population increases. And consumers and the economy have largely absorbed the higher payroll taxes and government spending cuts that weighed on growth last year.

“The single biggest underlying basis for people being optimistic is considerably less fiscal drag,” said Jason Furman, chairman of the White House Council of Economic Advisers. In an interview, Furman said Friday’s report did not change anything fundamentally, noting that job growth numbers vary from month to month.

He took note, however, of the sizable job losses last month at state and local governments.

“That’s something we hadn’t seen lately,” he said. “We’re going to have to be watching that carefully.”

In addition, the sudden flattening of employment growth in health care merits attention.

Hospital reimbursements are not growing as fast as expenses, and utilization is declining as consumers shift to lower-cost care centers, said Aaron Gerber, a health care specialist and partner at the consulting firm Oliver Wyman.

“What we’re seeing is our hospital clients across the country are taking significant costs out of the system,” Gerber said, although he added that physicians’ offices and other facilities such as surgery centers should continue to add staff.

Friday’s employment report also included an annual revision of jobs data based on tax records. The average job growth for last year was raised to 194,000 a month from 182,000.

With that and the January increase, the economy has recouped 7.8 million of the 8.7 million jobs lost between the start of the recession in late 2007 and early 2010, when employment hit bottom.