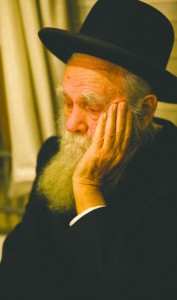 The Jewish community in general and the Bobover kehillah in particular suffered an irreplaceable loss on Friday morning, the seventh of Adar, with the petirah of Rabbi Yosef Shmiel Landau, z”l. His petirah marked the end of an era, leaving a deep void. He was 92.

A beloved mentor, a noted talmid chacham, and a famed askan, Rabbi Landau was the pillar of the Bobover chassidus and a legend in our times.

Rabbi Landau was born in Bytom, Germany, in 1922 to Reb Mattisyahu and Mrs. Chanah Sarah, Hy”d. Shortly thereafter, his family moved to Kshanov. When he was two years old, his family moved again, this time to Ushpitzin (Auschwitz) Poland, where he resided until the war broke out.

During the Holocaust, Reb Yosef Shmiel spent five bitter years — from the age of 17 to 22 — in a series of labor camps. He miraculously survived the atrocities, but it took a heavy toll on his health. After a long and difficult recovery he arrived to the DP camps in Hohenems, Austria.

At a young age, Rabbi Landau already excelled in his abilities to take charge and help rebuild and strengthen the low-spirited and broken neshamos. Together with his fellow Ushpiziner, Reb Shaul Hutterer (later of Antwerp), he established a yeshivah and beis medrash in the DP camp.

He was introduced to his wife Mrs. Leah (Leitchu), a”h, nee Fleischman, who stood by his side supporting him in all his endeavors throughout their married life. She passed away five years ago on 24 Sivan 5768 (2008).

In America Rabbi Landau threw himself into askanus, attaching himself b’lev uv’nefesh to the Bobover Rebbe, Harav Shlomo Halberstam, zt”l, who relied on him for every detail, whether klal-related or on a personal level.

It was Rabbi Landau who was appointed by the Bobover Rebbe to lead the first Bobover cheder in Brownsville in the 1950s. He was the one who established Camp Shalva, where he single-handedly tended to both the ruchniyus and gashmiyus of the campers. Rabbi Landau gave his shiurim on Shir Hashirim every Friday, and led Shabbos meals, while also overseeing the kitchens and physical maintenance.

Behind the scenes he was heavily involved in all aspects of the various Bobover mosdos. He played a pivotal role in ensuring the financial stability of Kiryas Bobov in Eretz Yisrael.

In recent years, despite his advanced age, Rabbi Landau initiated the construction of a new campus for Yeshivas Eitz Chaim in Bnei Brak, a magnificent structure that is nearing completion.

The levayah, which was attended by hundreds of people, took place on Friday morning. In an unusual step that illustrated his singular role in helping build the Bobover mosdos, the aron was taken into the Bobover beis medrash. Maspidim included Harav Chaim Yaakov Tauber, shlita, the Bobover Dayan; Reb Mechel Rosenberg, a son-in-law; Rabbi Leibish Landau, a mechutan and close relative; and Reb Matis Rosenberg, his eldest grandson.

Every one of the maspidim noted that Rabbi Landau was niftar on 7 Adar, the yahrtzeit of Moshe Rabbeinu. Moshe was described as an eved ne’eman to Hashem, they said, and Rabbi Landau, too, negated his self to causes greater than him.

Rabbi Landau is survived by his daughter, Mrs. Chanie Rosenberg, who is married to Reb Mechel Rosenberg of Montreal, a renowned baal tzedakah; grandchildren and great-grandchildren, all following in his footsteps.

This article appeared in print on page 1 of the February 10th, 2014 edition of Hamodia.