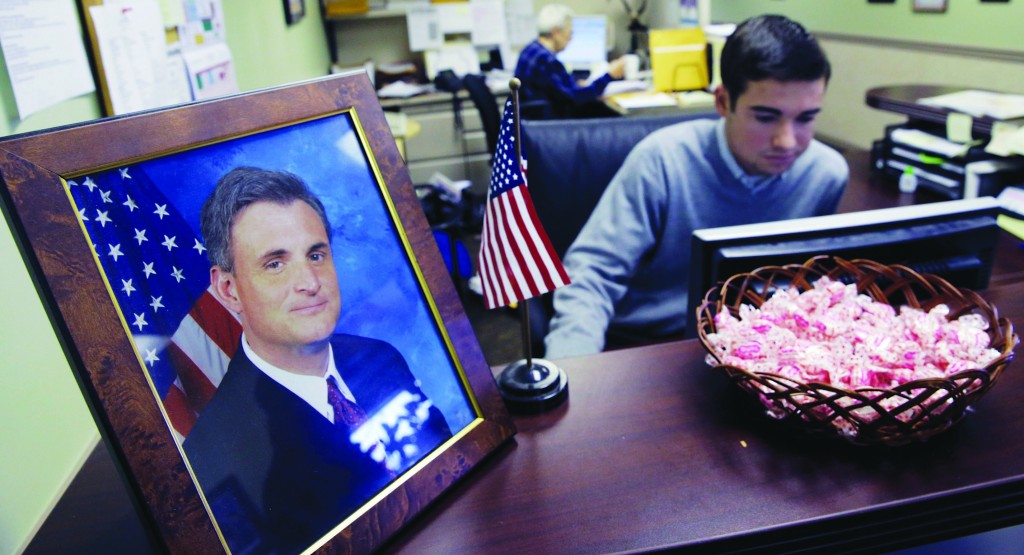 U.S. Rep. Rob Andrews announced Tuesday that he is resigning from Congress after more than 23 years, a decision that could short-circuit a House Ethics Committee inquiry into whether the New Jersey Democrat used campaign donations for personal purposes.

Andrews, who previously aspired to higher office, said the inquiry was not a factor is his resignation, effective Feb. 18. He is taking a job running the governmental affairs unit of a Philadelphia law firm where his wife has worked.

Andrews, 56, said during a news conference that he has not decided whether to register as a lobbyist when he starts his work at Dilworth Paxson. If he does, he will not be allowed under federal law to lobby members of Congress in the first year he is out of office.

A congressional ethics committee has been looking into Andrews’ spending after reports that he was using campaign funds for frequent trips to California, where his daughter lives.

The investigation started after the Office of Congressional Ethics issued a report in 2012 highlighting several questionable trips Andrews took that were paid for or reimbursed by campaign accounts.

The report highlights other questionable payments, including some of the costs of a party that jointly celebrated Andrews’ time in Congress and the high school graduation of one of his daughters. Some of these expenses were “not ordinary and necessary,” according to the OCE report.

The report also says that Andrews justified paying for several trips to Los Angeles and meals for daughter Josie, now 19, by listing her as a volunteer campaign staffer. That claim was “not supported by the evidence obtained,” the OCE report concludes.

An Associated Press analysis of his campaign spending in 2012 found Andrews had spent at least $97,000 in campaign funds on at least 18 trips to California from 2007 to 2011.

The House Ethics Committee was expected to announce it will no longer pursue the case once his resignation becomes official, because it lacks jurisdiction over ex-members.

Andrews ran statewide twice, losing a gubernatorial primary in 1997 and then mounting an unsuccessful primary challenge in 2008 against Sen. Frank Lautenberg. The challenge against Lautenberg, who died last year at 89, ruffled the feathers of some in New Jersey’s Democratic establishment.

Andrews, who grew up in the blue-collar town of Bellmawr and commutes daily by train to Washington, said he would not return to Congress if he lost that Senate election. His wife ran in the primary for his House seat that year and won. But after Andrews’s primary loss to Lautenberg, he returned to the House ballot for the general election.

Andrews also was in the spotlight when he broke with his party by supporting the war in Iraq and worked with the George W. Bush White House on the wording of the resolution authorizing military action. He also had a key role passing President Obama’s health insurance overhaul in 2010.

Andrews said Tuesday that he would support state Sen. Donald Norcross, the brother of powerbroker George E. Norcross III, if he runs for the suburban Philadelphia seat.

The 1st District seat is one of at least two in New Jersey that will be open for this November’s election. Rep. Jon Runyan, a Republican has announced that he will not seek a third term in the 3rd District.