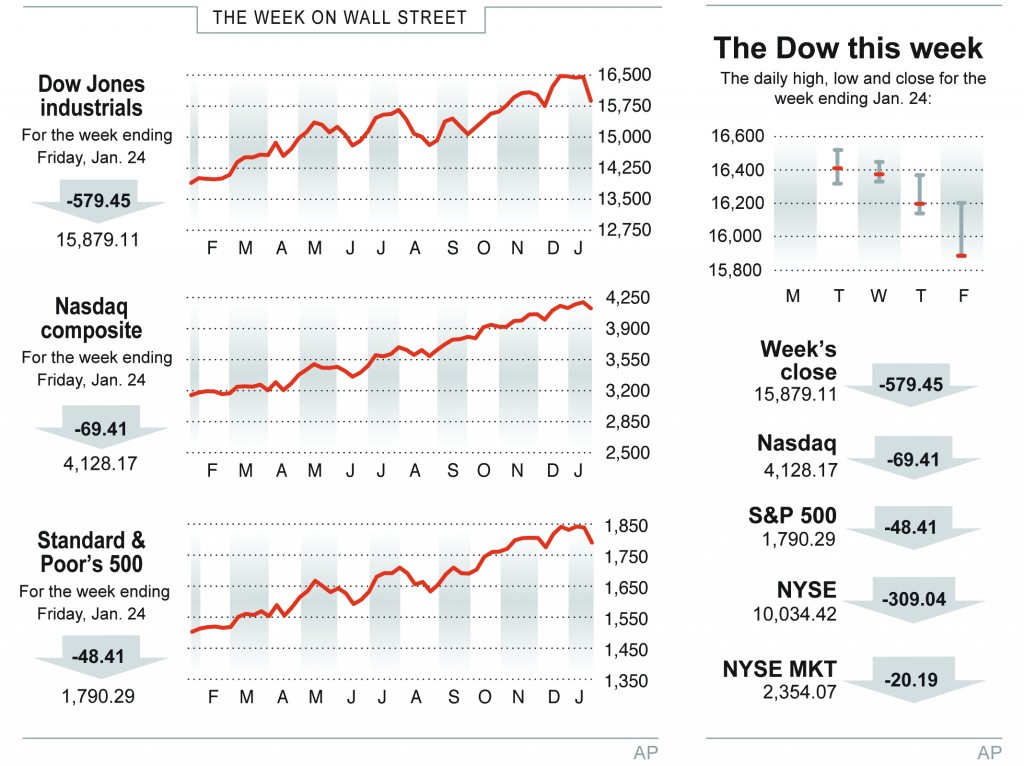 Fear is back in the market.

Investors are worried about slower economic growth in China, a gloomier outlook for U.S. corporate profits and an end to easy-money policies in the United States and Europe. They’re also fretting over country-specific troubles around the world — from economic mismanagement in Argentina to political instability in Turkey.

Those fears converged this week to start a two-day rout in global markets that was capped by a 318-point drop in the Dow Jones industrial average Friday. It was the blue-chip index’s worst day since last June. The Dow plunged almost 500 points over the two days.

As investors shunned risk, small-company stocks fell even more than the rest of the market, and bond prices rose.

U.S. stocks have not endured a correction — a drop of 10 percent or more over time — since October 2011.

The turbulence coincides with a global economic shift: China and other emerging-market economies appear to be running into trouble just as the developed economies of the United States and Europe finally show signs of renewed strength nearly five years after the end of the Great Recession.

The trouble began Thursday after a January survey showed a drop in Chinese manufacturing activity. Days earlier, China reported that its economic growth last year matched 2012 for the slowest pace since 1999.

“It is interesting how even a mild tremor in China’s growth causes such anxiety around the world,” said Eswar Prasad, professor of trade policy at Cornell University.

Slower growth in China is bad news for countries that supply oil, iron ore and other raw materials to the world’s second-biggest economy. Some of those countries, such as Indonesia and South Africa, were already struggling with an outflow of capital as rising U.S. interest rates drew investors to the United States.

Here’s a look at the forces buffeting global financial markets:

The end of easy money

Since the global financial crisis hit in 2008, the Federal Reserve has flooded markets with cash to push interest rates lower and encourage U.S. businesses and consumers to borrow and spend. But last month, as signs of growing economic strength emerged in the U.S., the Fed cut back — reducing its monthly bond purchases to $75 billion from $85 billion. It also said that it expected to reduce the bond-buying further “in measured steps” at upcoming meetings.

The Fed meets again Tuesday and Wednesday. Many economists expect the central bank to cut the purchases again — perhaps to $65 billion a month.

The scaling back of the Fed’s easy-money policies has hit some emerging markets hard. When the Fed was pushing U.S. rates lower, emerging markets had seen an inflow of capital from investors seeking higher returns than they could get in the United States. Now investment is flowing back to America, hammering currencies in emerging markets.

The South African rand, Russian ruble, Turkish lira, and especially the Argentinian peso — which fell 13 percent Thursday — have been “trounced,” said Jane Foley, a currency strategist at Rabobank. “Talk that the U.S. Federal Reserve will announce another reduction in its monthly bond purchases next week … [is also] contributing to a loss of confidence in some emerging markets,” she said.

Since the recession, the global economy has relied heavily on China and other emerging markets as the developed economies of the United States, Europe and Japan struggled.

But China’s economy is decelerating. It grew 7.7 percent in October-December 2013 from a year earlier, down from the previous quarter’s 7.8 percent growth. Factory output, exports and investment all weakened. On Thursday, the preliminary version of HSBC’s purchasing managers’ index of Chinese manufacturing fell to 49.6, the lowest reading since July’s 47.7. Anything below 50 signals a contraction.

China’s growth is still far stronger than the United States, Japan or Europe, but is down from the double-digit rates of the previous decade.

The 17 countries that use the euro currency appear to be recovering from a debt crisis that tipped them into a double-dip recession in late 2011.

In the U.S., the outlook for corporate profits has already been weakening, and the turmoil in emerging-market currencies could make matters worse.

About two-thirds of the 123 S&P 500 companies that have reported fourth-quarter earnings so far have beaten analysts’ estimates, according to S&P Capital IQ, in line with the historical average. But the forecasts for income growth have been falling and could decline further.

As recently as this summer, analysts predicted earnings growth of more than 11 percent for the fourth quarter, but now they expect just half that — 5.9 percent.

Some companies are becoming more pessimistic, too. For the January-March quarter, seven out of every 10 that have talked about their prospects have cut projections, more than average, according to FactSet. The stocks have tanked as a result. Since United Continental lowered revenue estimates on Thursday, for instance, its stock has fallen 6 percent.

U.S.-based multinational companies posted some of the biggest declines on Friday as investors worried about overseas sales. Oracle and 3M have warned that their results could take a hit because of the strengthening dollar. Shares of the companies fell 3 percent.

Companies that rely on overseas sales will bring home fewer dollars if the dollar continues to appreciate against foreign currencies, especially in emerging markets that have been hammered this week.