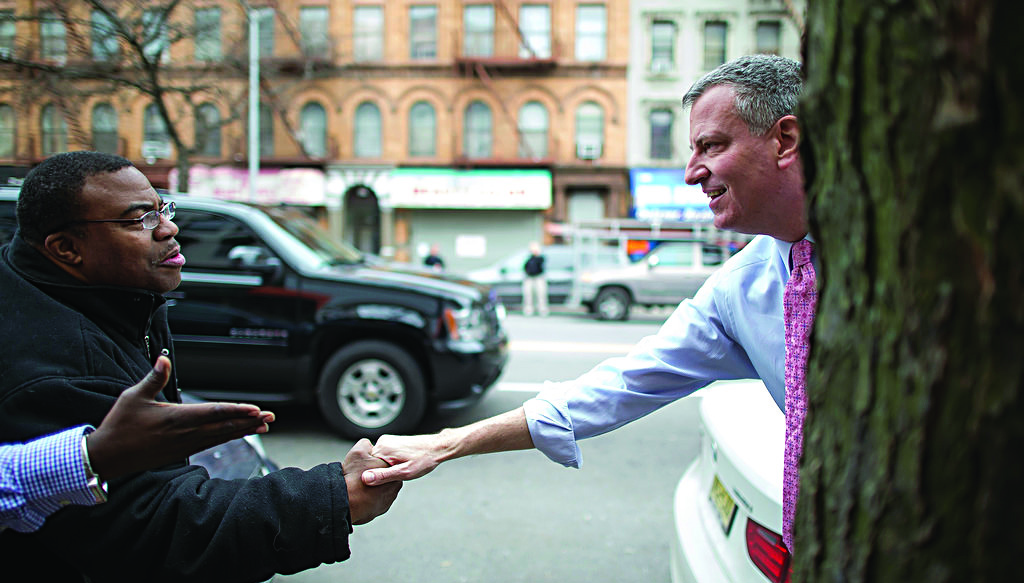 New York Mayor Bill de Blasio, propelled by a landslide election and the hopes of a party out of power for a generation, will be quickly unveiling an ambitious liberal legislative program that could fundamentally reshape the role of government in the nation’s largest city.

De Blasio, a Democrat whose efforts will be closely watched and potentially imitated across the nation, is wasting no time. He has begun pushing for sweeping changes on several fronts, from the care of the homeless to police conduct, all while trying to leverage his political capital into a proposal that would be unthinkable for most politicians: to raise taxes.

“He’s trying to send a strong signal that he is going to be ambitious in his legislative goals,” said Costas Panagopoulos, a political science professor at Fordham University. “It’s a bold, risky strategy. He’s not at all trying to move in small steps.”

The centerpiece of his first year in office is to fund universal prekindergarten and expand after-school programs for middle school students by raising taxes on the wealthiest New Yorkers. His proposal would increase the income tax rate from 3.9 to 4.4 percent on residents who earn more than $500,000 annually.

But the mayor can’t raise taxes unilaterally and needs the support of the state Legislature and Gov. Andrew Cuomo. So de Blasio, both as mayor-elect and then after taking office, has devoted an enormous amount of energy to pushing the plan. He and his staff have wooed lawmakers, applied pressure through the media and trotted out a grassroots lobbying effort and powerful labor unions that support the idea. Cuomo has embraced the concept of pre-K, but appears leery of raising any taxes.

And the tax hike has become key for de Blasio, who has repeatedly said he wants a dedicated revenue stream — not a one-time budget maneuver — to pay for the plan. As the hike on the rich plays well in liberal circles, de Blasio has refused to even consider alternative means of funding the pre-K plan.

De Blasio ran a very liberal campaign to survive the left-leaning Democratic mayoral primary and didn’t tack to the center in the general election, refusing to budge from his plan to battle the city’s income inequality problem, which he dubbed “The tale of two cities.” He captured 73 percent of the vote on Election Day, posting the largest margin of victory by a non-incumbent while becoming the first Democrat to be elected mayor since 1989.

“Now I know there are those who think that what I said during the campaign was just rhetoric, just ‘political talk’ in the interest of getting elected,” he said during his inauguration speech. “So let me be clear: When I said we would take dead aim at the ‘tale of two cities,’ I meant it. And we will do it.”

To help pass his sweeping agenda, he helped install a partner at the controls of city government who shares much of his liberal ideology. De Blasio took the unusual step of forcefully interjecting himself into the City Council speaker race, lobbying councilmembers to defy the wishes of their party bosses to install Melissa Mark-Viverito as speaker.

After weeks of wheeling and dealing, she was voted in unanimously Wednesday.

De Blasio’s administration, while still not entirely filled out, believes it has the political capital to pursue multiple items on the agenda even as the future of the pre-K plan remains uncertain.

Many of his initiatives have long been pushed by liberals across the city and are a clean break from the policies set out by his predecessor Michael Bloomberg.

In the first days of his administration, de Blasio loosened the restrictions allowing access to homeless shelters, reversing a Bloomberg decision that would not let families stay in a city-run facility if they had relatives nearby who could theoretically provide them a place to stay. The number of homeless dramatically increased during Bloomberg’s time in office, and de Blasio, who says he was moved by a recent New York Times series about the plight of an 11-year-old girl, has pledged further changes.

The new mayor also campaigned on a promise to mend frayed relations between the police and some minority neighborhoods that he believes was caused by an overreliance on the police tactic known as stop-question-and-frisk. Although de Blasio hired a proponent of the tactic, William Bratton, to be his police commissioner, both men have pledged to better explain the use of the tactic.

De Blasio has also vowed to drop the Bloomberg administration’s objections to a pair of watchdogs — both an independent general and a federal monitor — who have been tasked with overseeing the NYPD. That could happen as early as next week.

In the first months of his term, de Blasio also aims to save a pair of Brooklyn hospitals on the brink of closing, perhaps by brokering a deal that would transform them into smaller urgent-care units.

And by year’s end, de Blasio — with help from the City Council — hopes to push liberal favorites like expanding paid sick days and begin creating 200,000 new units of affordable housing.

All of his moves will be eyed by Democrats in power in other cities, and those eyeing the White House, as the party appears to shift to the left before the 2016 presidential election.

“Even if all of his moves aren’t emulated, other (Democratic) politicians will be watching to try and avoid potential pitfalls,” Panagopoulos said. “But what they may find is that the liberal environment to support those changes is unique to New York City.”