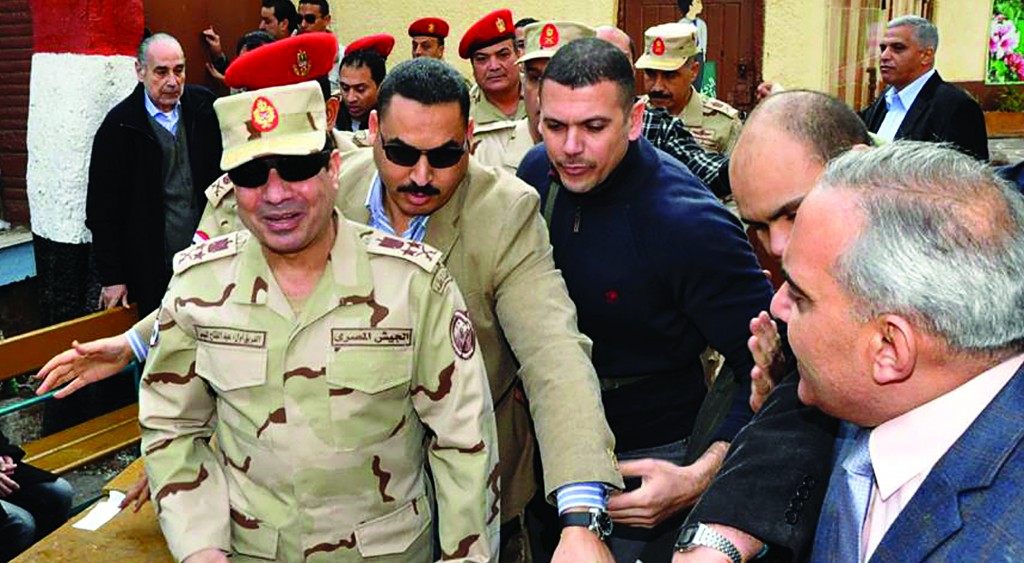 Egyptians overwhelmingly approved a new constitution by referendum, state media reported on Thursday, a widely expected outcome that nudges army chief General Abdel Fattah al-Sisi ever closer to a bid for the presidency.

The constitution won wide support among the many Egyptians who favored Morsi’s removal. The Muslim Brotherhood had called for a boycott, saying the vote was part of a coup that deposed an elected leader and revived a police state.

But the vote was also a sign of yearning for a return to stability after almost three years of violent disorder that has crippled the economy, impoverishing many.

The next step is expected to be a presidential election for which Sisi appears the only serious candidate. He has yet to declare he will run.

The authorities, who have billed the transition plan as a path to democracy, have also jailed leading Islamists and, in recent weeks, secular-minded activists.

Morsi and other top Brotherhood politicians are standing trial on charges including inciting violence and conspiring with foreign terrorist groups against Egypt. Several members of the secular protest movement have also been jailed for breaking a new law that tightly restricts the right to demonstrate.

An Interior Ministry official said turnout appeared to be more than 55 percent in what was the first vote since Morsi’s overthrow. A pro-Morsi alliance, which had called for a boycott, alleged fraud had occurred but offered no proof.

State media, on the other hand, gave a more conservative estimate of 40 percent turnout but said the percentage of approval of the constitution exceeded 95 percent, according to initial estimates.

“Early indications point to the fact that Egyptians made history this week with a high level of participation in the vote on the draft Constitution,” Ehab Badawy, Egypt’s spokesman for the presidency, said in a statement.

“This vote represents a resounding rejection of terrorism and a clear endorsement of the roadmap to democracy, as well as economic development and stability.” A decree is expected within days setting the date for presidential and parliamentary elections, Al-Ahram reported. The official result is expected Saturday.

The constitution was drafted by a 50-member committee appointed by decree. It deletes controversial Islamist-inspired provisions written into the basic law approved when Morsi was still in office, and strengthens the state bodies that defied him: the army, the police and the judiciary.

Some of the Islamists’ opponents pointed to the result as proof of a popular mandate for Morsi’s ouster. “The Egyptians write the Brotherhood’s death certificate,” Al-Youm Al-Sabea, a privately owned newspaper, declared on its front page.