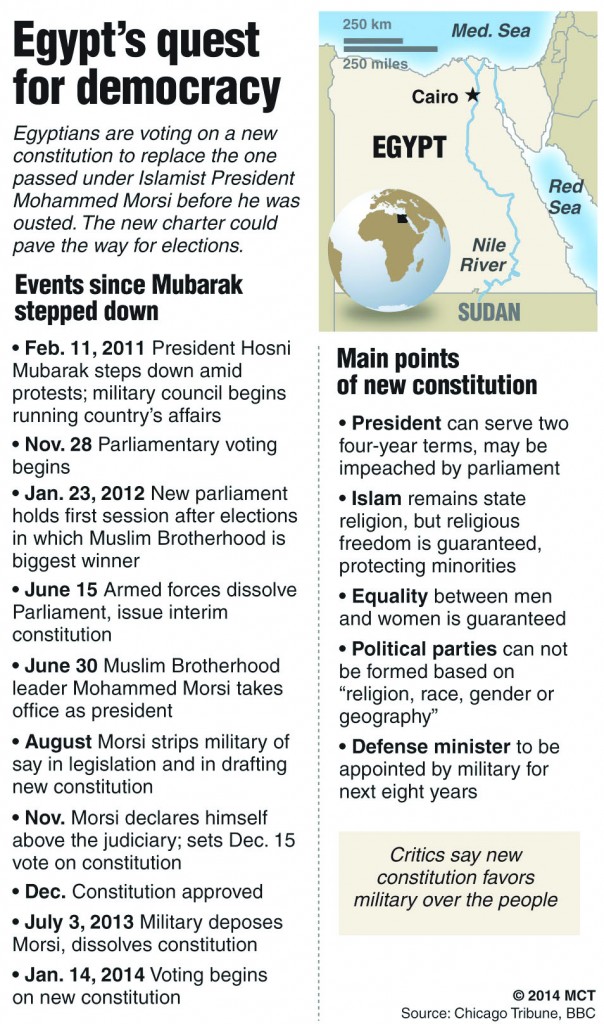 Egyptians voted on Tuesday for the first time since the military deposed president Mohamed Morsi on a draft constitution that may set the stage for a presidential bid by army chief General Abdel Fattah al-Sisi.

At least nine people were killed in confrontations between Muslim Brotherhood supporters and police, official sources said. Two small bombs went off, one in Cairo and one in the Nile Delta city of Mahalla, injuring no one.

The Brotherhood, still backing Morsi, who is now in jail, has called for a boycott and protests over the draft, which deletes Islamic language written into the basic law approved a year ago when he was still in office. It also strengthens state bodies that defied him: the army, the police and the judiciary.

While a state crackdown has erased many freedoms won by the 2011 uprising against president Hosni Mubarak, anticipation of more stable government sent the stock market on Tuesday to its highest level since his downfall. The main index exceeded its January 2011 peak, in its fourth straight gain.

The referendum is a milestone in the political transition plan the army-backed government has billed as a path back to democracy even as it presses a fierce crackdown on the Muslim Brotherhood, Egypt’s best organized party until last year.

A presidential election could follow as early as April.

Echoing a view widely held in Egypt, a senior European diplomat said Sisi would probably announce his candidacy in the next few days — a prospect that will delight supporters but could stir more conflict with his Islamist opponents.

With little or no sign of a campaign against the draft — one moderately Islamist party says its activists were arrested while campaigning for a no-vote — it is expected to pass easily, backed by many Egyptians who staged mass protests on June 30 against Morsi and the Brotherhood before his removal.

“We are here for two reasons: to eradicate the Brotherhood and take our rights in the constitution,” said Gamal Zeinhom, a 54-year-old standing in line at a Cairo polling station.

Others cited a desire to bring stability to Egypt after three years of turmoil.

Sisi ousted Morsi last July. Sisi’s Islamist opponents say he is the mastermind of a coup that kindled the worst internal strife in Egypt’s modern history and revived an oppressive police state.

But after a failed experiment with democracy, many are weary of the upheaval that has gripped this nation of 85 million and shattered its economy. They see Sisi, 59, as someone who can stabilize and protect Egypt from what local media depict as foreign and domestic conspiracies to divide the nation.

A Sisi presidency would mark a return to the days when the post was controlled by army men — a pattern broken by Morsi’s year in office.

The bloodiest clashes were in Sohag, south of Cairo, and in Giza on the outskirts of the capital, the health ministry said in an emailed statement.

The government has recently escalated its crackdown on the Brotherhood, declaring it a “terrorist organization” on December 25.

While Western states have criticized the crackdown and called for inclusive politics, they have put little pressure on Cairo.