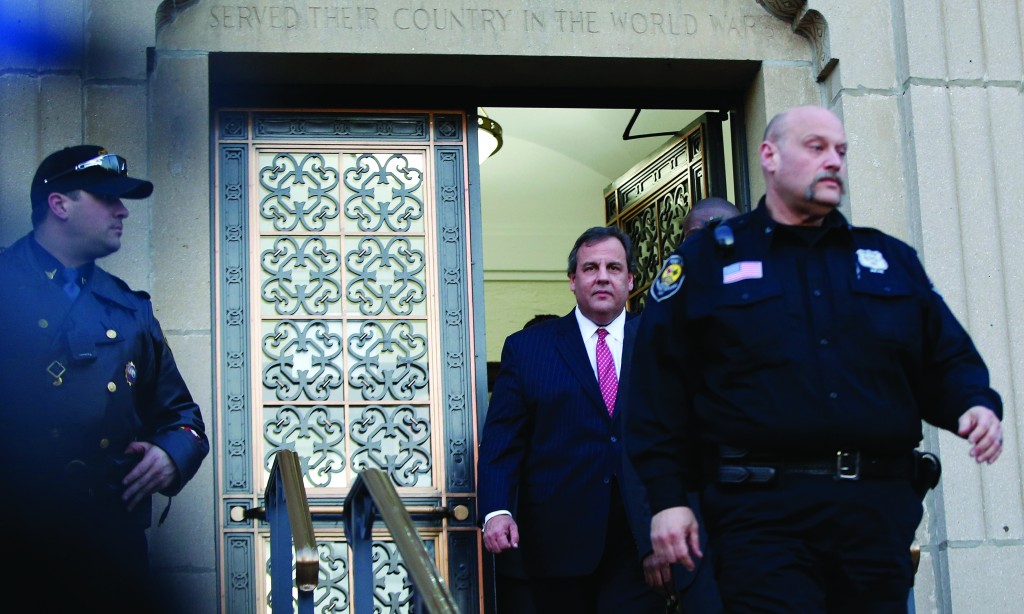 Gov. Chris Christie on Thursday apologized for highway lane closures apparently ordered by his aides as political retribution, said he had “no knowledge or involvement” in what happened, and sought to assure New Jerseyans the actions are not typical of the way his administration does business.

“This is the exception, not the rule,” he told a news conference.

Christie, who had previously assured the public his staff had no involvement in the road closings, said he had fired Deputy Chief of Staff Bridget Anne Kelly “because she lied to me.”

Kelly was the latest casualty in a widening scandal that threatens to upend Christie’s second term and likely run for president in 2016. Documents show she arranged traffic jams to punish the mayor, who didn’t endorse Christie for re-election.

The revelations thrust a regional transportation issue into a national conversation raising new questions about the ambitious governor’s leadership on the eve of a second term designed to jumpstart his road to the White House.

The U.S. attorney in New Jersey, Paul Fishman, said he was “reviewing the matter to determine whether a federal law was implicated.” The legislature is also investigating.

Christie on Thursday focused repeatedly not on the closures themselves but on how upset he was that his staff didn’t tell him the truth when asked about the closures.

“What did I do wrong to have these folks think it was OK to lie to me?” he asked.

The famously blunt Republican fielded dozens of questions from reporters with uncharacteristic patience and at times a sorrowful tone during a two-hour press conference.

Email and text messages obtained Wednesday indicated that the lane closings were retribution against the mayor of Fort Lee for not endorsing Christie for re-election last fall.

“Time for some traffic problems in Fort Lee,” Kelly wrote in August in a message to David Wildstein, a top Christie appointee on the Port Authority of New York and New Jersey.

A few weeks later, Wildstein closed two of three lanes connecting Fort Lee to the heavily-traveled George Washington Bridge, which runs between New Jersey and New York City. Christie also told Wildstein he didn’t want him working any longer as a consultant to the Republican Governors Association, which Christie heads this year.

The messages do not directly implicate Christie, but they contradicted his assertions that the closings were not punitive and that his staff was not involved.

Christie acknowledged Thursday that was a lie, because his staff didn’t tell him what they had done.

He also said he had “no knowledge or involvement in this issue, in its planning or execution” and was stunned by the “abject stupidity that was shown.” He said he was “embarrassed and humiliated” by his staff. At the same time, he said he accepted responsibility.

“I am responsible for what happened. I am sad to report to the people of New Jersey that we fell short,” he said.

Fort Lee Mayor Mark Sokolich called it “appalling” that the traffic jams appear to have been deliberately created. He said Christie should apologize to residents of Fort Lee, one of whom died because the traffic prevented her from getting to the hospital on time.

Despite Sokolich’s initial refusal to meet Christie, the governor went to Fort Lee on Thursday to apologize personally.

Political analysts on both sides of the aisle said Christie would probably pull through OK — provided there are no more surprises.

Democratic operative David Axelrod complimented Christie for handling the news conference “as well as he could.”

Beyond the specifics of the lane closures, critics suggest the incident reflects a darker side of Christie’s brand of politics that contradicts the image he’d like to project as he eyes the presidency.

The governor repeatedly sidestepped criticism that he bullied adversaries in an overwhelming re-election victory in November.

Facing a little-known and underfunded opponent, he cast himself as a different kind of Republican: a compromising, consensus builder who ultimately earned strong support from minorities, union members and even many Democrats.

In less than two weeks, he is scheduled to celebrate his second inauguration in the shadow of the Statue of Liberty on historic Ellis Island, a symbolic beginning to a second term designed to expand Christie’s bipartisan appeal. He also is expected to unveil his second-term priorities — solidifying his presidential resume — in a state-of-the-state address later this month, while beginning an aggressive national travel schedule as chairman of the Republican Governors Association.

Wildstein, a childhood friend of the governor, in testimony later Thursday before a state Assembly committee, said he would not reveal any information upon the advice of his lawyer.