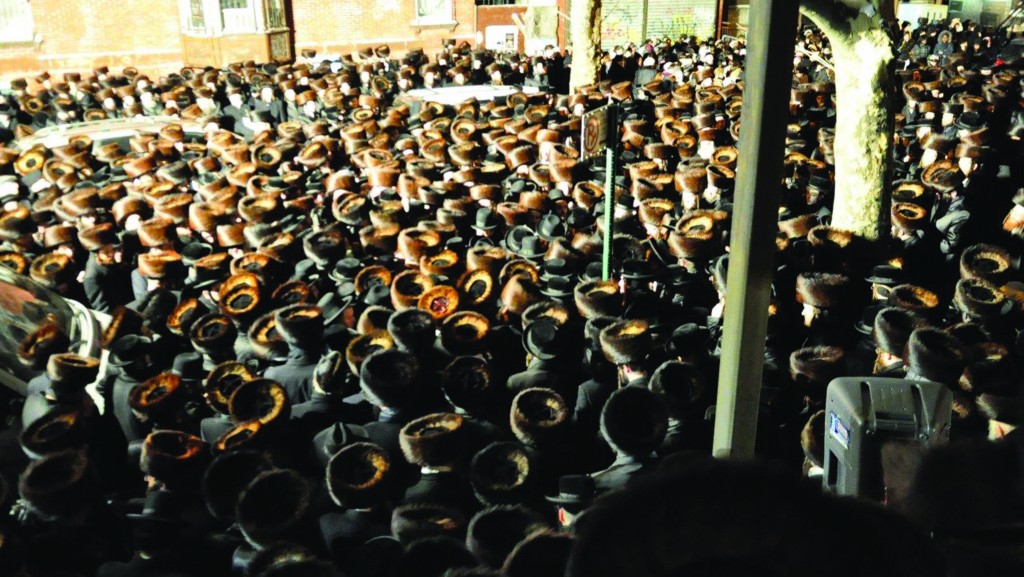 Countless prayers were uttered on Friday on behalf of the greatly beloved member of the Williamsburg community, a father of seven young children who was kidnapped on Thursday night in front of his office on Rutledge Street. On Motzoei Shabbos, when word came that his body had been found in Great Neck, Long Island, the greater Jewish community was enveloped in heavy grief.

Their voices breaking with emotion, family members and friends described a man with a sterling reputation who was continually involved in acts of kindness.

“He lived only to do for others,” his brother-in-law, Moshe Strulowitz, recalled in a conversation with Hamodia. “He was incredibly soft-hearted, and fled from any sort of publicity. When approached for a cause, he would give a generous donation, and then add an additional $1,000 — on condition that his donation was kept secret. …

“I bothered him every week for another cause,” he related. “On numerous occasions, he would hand a family member a significant sum of money and ask them to deliver it to a needy recipient.

“He would tell me, ‘Say it’s coming from you,’” Strulowitz said. “‘He would pay the tuition of children whose families couldn’t afford it, the rents of families who couldn’t pay. He quietly helped support talmidei chachamim.

“He warned me not to tell,” he added.

Rabbi Moshe Indig, a community askan, remembered “an engaging personality,” who was always friendly with everyone.

“Anyone that came to him for money was welcome and he would try to help them,” Indig said.

Reb Menachem’s day would begin in the early morning. He would daven vasikin and learn with his children, and personally bring them to cheder.

His oldest, a girl, is only 16. His youngest is a one-year-old boy.

Family members and business associates asserted that the niftar had no known enemies, and firmly rejected media reports as unfounded rumors.

“He had a thousand tenants,” Strulowitz said. “The overwhelming majority had only good things to say about him. He was there for them; he would give them his private cell phone number to call in case of problems.

“When someone has so many tenants, there are always going to be a few who are unhappy about something — and they spoke to the media.”

When contacted by Hamodia, numerous independent sources within and outside the community echoed Strulowitz’s words, and expressed bewilderment that anyone would seek to harm Reb Menachem, whom they described as a beloved, extremely kindhearted man.

Friends of Stark’s — some since childhood — all paint the same picture:

“He was not just an ATM machine. If someone has money and is fortunate enough to help others financially, that’s one thing. … But that’s not the whole picture. He was a person who, if someone was in need, would try to find out what needed to be done.”

When Stark heard about a boy who was having trouble in yeshivah, he went down to the yeshivah himself — quietly, without anybody knowing about it — and tried to see what he could do to help. When it became clear that it wasn’t going to work out in that yeshivah, he found another yeshivah for the boy. “Today that boy is a different person — all because of Menachem.

“It was never just money,” the friend pointed out. “Money can do as much as money can do. But he gave of himself. And it was without the family’s knowledge. And he got things squared away.”

Another friend added, “You have to know this was someone who didn’t have an extra minute in his life. He was such a busy guy. And he took off days and weeks to help this boy. …”

Friends said Stark’s home was always open to helping others. One remembered a man who came from Israel to raise money to marry off his child. Stark felt the man wasn’t being treated right. So he called the man and said he couldn’t make a tea party for him because he had just hosted one — that raised $50,000 — for another cause. He couldn’t call the same people again. But he offered the man his home and told him, “Do whatever you have to do; let’s make it right.” He asked a few friends to make a party for the man. And his friends are now following through, to make the fundraiser in his zechus.

“Just two Shabbosim ago,” said one friend, “a guy who davens with us got engaged. The fellow is in his 30s and a yasom. So Menachem made a kiddush for him in shul to make him happy, to show that someone cares about him.”

As so many said, Stark was always thinking about others, but he always made sure they didn’t know Menachem Stark was the one behind the scenes.

He never waited to be asked. A friend lost his wife, R”l, and has a child to marry off. Just a few weeks ago, Stark called another friend and said, “Listen, I’m going to give $10,000 and I want you to match the funds. Get money from friends or match it yourself.”

The friend recounted, “I told him I spoke to the man and he said he doesn’t need it. But Menachem insisted, ‘I’m telling you that you should do it.’ Nobody asked him for it, but he saw a need and he was putting up $10,000 for it. Sometimes people have money and they write a check; b”H, they are fortunate enough to help others. Menachem was not someone to write a check and say, ‘Okay, I did mine.’ He always got involved and made sure that whatever needed to be done was done.”

Perhaps most telling is a story from when Stark was a child in cheder. A former classmate remembered: “There was a boy getting bullied on the bus every day. Menachem couldn’t stand it. So one day he said to the boy, ‘You know what? You can’t go with this bus. I’ll come to cheder and walk home with you.’ And it was a walk of at least 20 blocks; and Menachem walked him to and from cheder every day — for at least a year.”

All his friends are bewildered. Why would anybody have wanted to hurt him, and why would anyone want to say anything bad about him?

“People say all kinds of things and I say to myself, whom are they talking about? They’re certainly not talking about the person I knew since I’m a child,” declared one.

Police are continuing to investigate the murder.

He is survived by, ybl”c, his wife, Mrs. Bashie Stark, a well-known baalas chessed in her own right; his parents, Reb Yisrael and Mrs. Shaine Etta Stark; five sons and two daughters; and five brothers and three sisters.

Portions of this article appeared in Monday’s daily