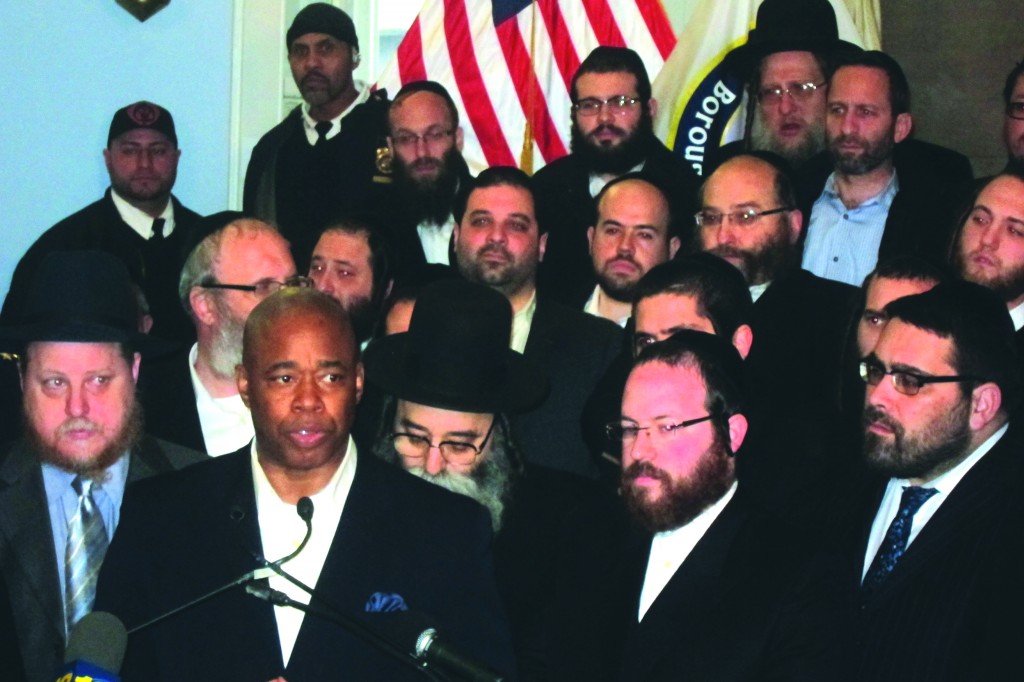 A front page headline on the tragic abduction and murder of Reb Menachem Stark, Hy”d, by a New York tabloid known for its across-the-board offensive coverage sparked an unusual amount of outrage, with a spreading social media assault morphing by Sunday afternoon into a press conference attended by hundreds of people.

Thousands of people knew Reb Menachem, whose mysterious disappearance Thursday night generated a frantic search which culminated in a Motzoei Shabbos levayah, as a generous family man who dispensed interest-free loans to friends and those in need. (See related story.)

Which is why so many people were furious and stunned by a New York Post full-page cover headline that seemed to condone his cold-blooded murder.

Based on anonymous law- enforcement sources ubiquitous to the Post, an article written by no less than 10 reporters dredged up a litany of untruths to malign the integrity of Mr. Stark — hours after a tearful levayah ended in Williamsburg.

But the focus of the outrage was on the headline, written in huge fonts across half the cover, next to a full-size image of Mr. Stark, complete with a shtreimel and obviously Jewish appearance.

At a press conference in Brooklyn Borough Hall Sunday afternoon, speaker after speaker excoriated the tabloid, which is known for its cheap sensationalism.

Criticism of the Post came thick and fast from the nearly a dozen speakers, and even more from social media postings. An estimated 5,000 comments were posted by Sunday afternoon.

“We have to question whether a paper like this has a place in our society,” said Councilwoman Laurie Cumbo, a Crown Heights Democrat.

“Is this freedom of the press?” questioned Assemblyman Joe Lentol, a Democrat who represents the district where Mr. Stark lived. “This is an outrage. Sure it’s freedom. It’s freedom to do what you want and discount the fact that a man lived, a man was kidnapped, a generous man, a man who provided for his family, for his seven children and his wife, a man who gave to every community endeavor that he was ever asked for. A man who lived and died for his community. Does he have faults? We all have faults. Does anyone with faults deserve this kind of treatment? I say not.”

“And the New York Post should be ashamed of themselves!”

“Your honor,” Lentol said, turning his eyes heavenward, “I rest my case.”

Aron Weider, the Orthodox Jewish majority leader of the Rockland County legislature, opened the Post to the article inside, which was headlined, “Gone, But Not Forgiven.”

“Today,” said newly elected Public Advocate Letitia James, addressing the Post, “you’ve given license to murder. Today you have condemned someone without the facts. Today you minimized and made insignificant — life.”

The loudest and most sustained applause came when James, one of three officials elected citywide, called for a boycott of the Post.

“And to the New York Post,” she added, alluding to a Post editorial Saturday calling for the elimination of her citywide position, “thank you for reminding me why we need a New York City public advocate.”

Felder condemned the “crass cover” of the Post, and demanded they apologize “to all New Yorkers for its egregious behavior and failure to exercise any judgment whatsoever in this matter.”

Hikind said that the Post, in their rush to “sell papers” showed “that they are willing to sacrifice the standards of propriety from time to time. But there is a difference between bad taste and just plain indecency.”

Councilman David Greenfield described Stark’s reputation as a family man, a businessman who was respected by his community, and the shock the tragedy has had on people.

“But you wouldn’t know any of this from the coverage in today’s New York Post,” he said. “…We are disgusted, we are outraged and we are appalled that the New York Post would dare celebrate — celebrate! — on their front page the murder of an innocent new Yorker. Even Osama bin Laden, when he made the front page of the New York Post, he — a terrorist who killed thousands of our citizens — got better treatment.”

Greenfield demanded an apology by the Post, “on the front page, by tomorrow morning … because anything less would be unacceptable.”

That demand came sooner than Monday morning. Minutes after the press conference concluded, Post spokeswoman Suzanne Halpin said in a statement that the paper will not retract its offensive imagery. She added that the Post’s “thoughts and prayers are with the family at this time of loss.”

That response, Adams said in a statement, “does not answer the call for a full apology.”

“To truly express remorse, the Post must publish a formal apology to the Stark family in tomorrow’s paper; that is the bare minimum we should accept.”

While the Post characterized their reportage as based on facts, many of the speakers said they considered it incitement and hate speech.

The Post, Agudath Israel said in a statement, “demonstrated the poorest taste by choosing to focus on anonymous accusations rather than on the human tragedy of a wife and family’s sudden and terrible loss, and on their, and their community’s, grieving. Particularly at a time when Jews have been attacked on New York streets and are regularly vilified by hateful people around the world, the tabloid has demonstrated unprecedented callousness and irresponsibility.”

Deutsch, the Flatbush councilman, said that this kind of “lynching” led to Leo Frank’s death in Georgia a century ago, a Jew blamed by a mob for the death of a local girl. And Weider of Rockland County said that “the Holocaust taught us that we need to condemn hate and hateful speech in its infancy.”

Some of the speakers focused on Mr. Stark’s chessed, such as Mendy Hoffman of the Williamsburg branch of Bonei Olam.

Hoffman noted that Stark was to be awarded the Rav Poalim prize at their upcoming dinner in a few weeks.

“The community is mourning after losing such a good friend in such a brutal way,” Hoffman said, his voice breaking.

Yidel Perlstein, the chairman of Boro Park’s Community Board 12, wondered why the Post would go after such an honorable man.

“His family didn’t do anything to the New York Post,” he said, adding that he spoke to about 25 of Stark’s tenants, “who are literally crying, who are planning a vigil tonight.”

Rabbi Moshe Dovid Niederman, a Williamsburg community leader, said that the real story to be investigated by a team of 10 Post reporters is the chessed that goes on in his community.

Addressing some of the unfounded allegations in the Post report, shortly before the conference’s conclusion, a tenant of Mr. Stark’s arrived, saying that he wanted to set the record straight.

“He was a great landlord to me and to my fellow neighbors,” said the tenant, who did not say his name. “He was just a great guy, he always made me laugh, he always had a happy face. Everything he did was by the book — with me, at least.”

“We have to ask our journalists to work with more responsibility, to provide information to our communities that will empower them, that will inspire them,” she said. “We can no longer use tragedies as a way to sell papers. We can no longer allow the misfortunes of others to be utilized as a way to bring attention and resources to papers.”