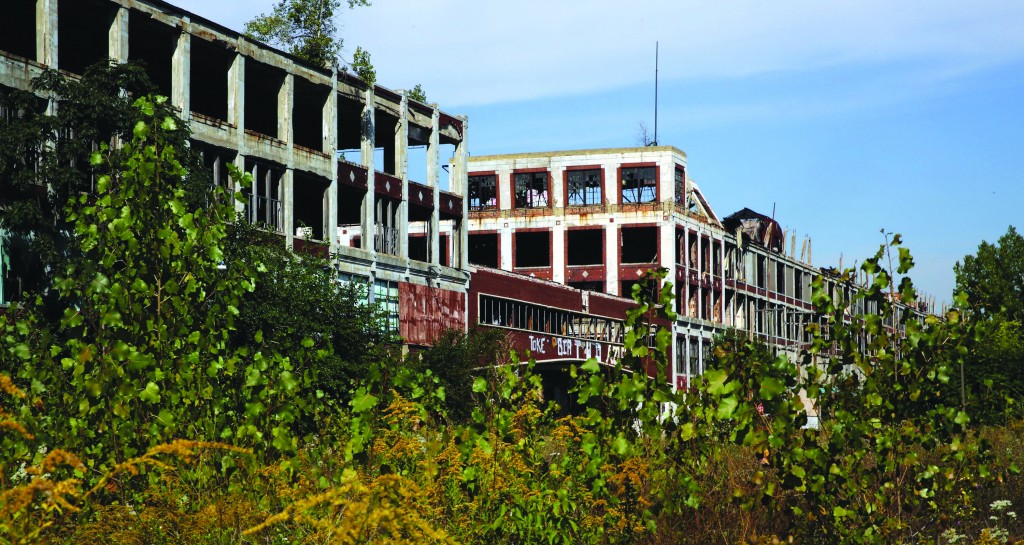 He’d heard stories of ruin and blight, but that didn’t prepare Oliver Kearney for what he saw:

Rubble-strewn parking lots overrun with weeds, buildings taken over by bright pink graffiti, the message scrawled on blackboards in deserted schools: “I will not write in vacant buildings.”

He took 2,000 photographs his first day.

“No other American city has seen decline on this scale,” Kearney said. “It’s really a once-in-a-lifetime thing.”

And he saw it all on a tour.

Kearney, an 18-year-old aspiring architect, persuaded his father to travel with him from Britain to Detroit to participate in one of the city’s few burgeoning industries: tours of abandoned factories, churches and schools.

Led by tour guide Jesse Welter, they crawled on their hands and knees to peek inside a train station closed long ago; they squeezed through a gap in a fence to climb the stairs of what was once a luxury high-rise.

“In Detroit, you can relate, you can see traces of what’s happened, you can really feel the history of a city,” Kearney said. “In Europe, when things become derelict, they’ll demolish them.”

The city says that 85 percent of its 142.9 square miles had “experienced population decline” over the last decade, and efforts to persuade investors to buy commercial buildings and rehabilitate them have been mixed, at best. For example, plans to turn the Michigan Central Depot, a once-grand train station, into a casino and then into police headquarters have gone nowhere and it’s stood empty since 1988.

Welter once worked as an aircraft mechanic and then an ATM repairman. He dabbled in photography and began venturing into the city from his home in the suburb of Royal Oak, taking pictures of derelict buildings and selling the shots at an artists market.

The photos, though grim, brought back sweet memories: Viewers would remember passing through the train station in its glory, or recall photographs of their grandparents spending time at a posh hotel, depicted in Welter’s photos as a decaying tower.

Welter figured that if other people were interested in seeing the buildings, he could guide them around and, perhaps more important, keep them safe. In October, two tourists were carjacked while visiting an abandoned factory; others have been assaulted there.

Welter guided his first tour in late 2011, but the business has really picked up this year. His clients pay $45 for a three-hour tour and explore some of Detroit’s most famously blighted structures: the Packard Automotive Plant, the train station and the East Grand Boulevard Methodist Church, which features peeling paint and vast balconies.

Welter knows how to sneak into buildings closed to the public. He knows which neighborhoods are plagued by packs of feral dogs, and which ramshackle building contains a recording studio with equipment still set up as if its occupants just left for lunch.

It’s not legal, per se, to enter these buildings. Police will give $225 tickets for trespassing if people enter schools, Welter says, but have otherwise told him they don’t mind him going into other buildings.

He’s not afraid of the authorities — they’re in short supply in this cash-strapped city — but of scavengers, vagrants and others who might take advantage of someone with an expensive camera. That’s why he usually launches his tours at 7 a.m., the best time to avoid other humans, he says.

Locals are upset at the phenomenon of people gawking at the decay. They want visitors to see the positive parts of Detroit, such as the vacant fields that enterprising farmers have turned into urban gardens.

Some Detroiters, including a group of urban explorers, have a beef with Welter in particular. Welter says he’s opening visitors’ eyes to the problems of Detroit, which could potentially drum up political will to help the city.

“People are going to do this anyway. Why not do it in a way that’s going to be safer, easier for everyone?” he said.

Jason Schlosberg went on a tour with Welter when he was visiting Detroit on a business trip. Schlosberg, a lawyer and photographer from Washington, D.C.

His experience touring crumbling ballrooms and onetime high-end residences caused him to think long and hard about what lessons Detroit can teach the rest of the country.

“It makes you question your mortality. … We try to make our mark on the planet by building these concrete and brick structures, but Rome obviously fell,” he said. “What is Manhattan going to look like in 300 years? Is it still going to be a bustling metropolis?”