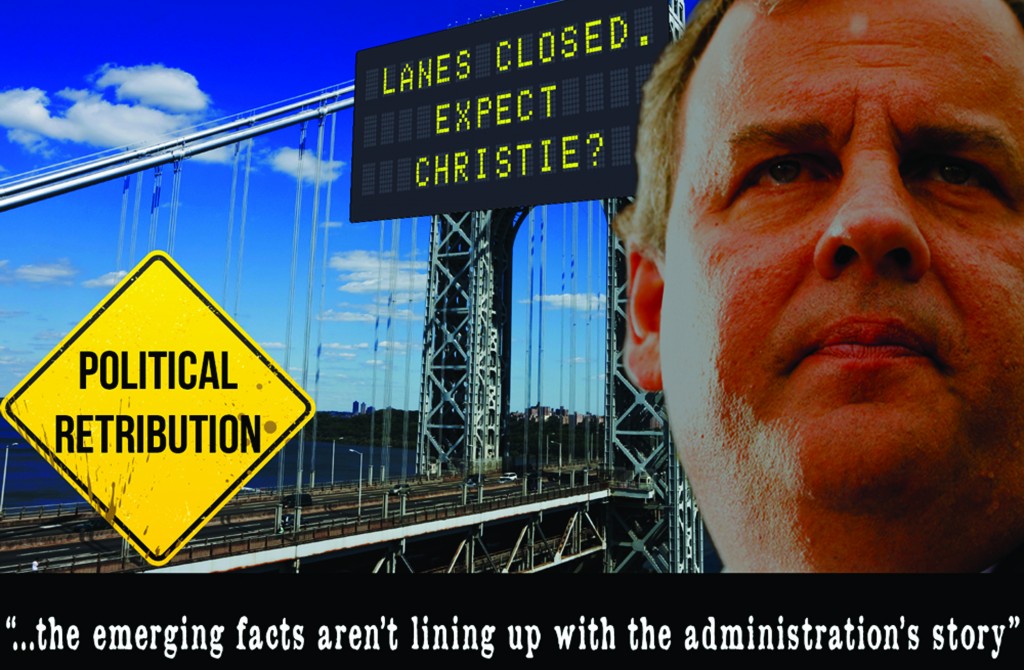 The issue at hand is small, even for local politics: The sudden closure, over four days, of a pair of access lanes from Fort Lee, N.J., onto the George Washington Bridge into New York.

But in this traffic mystery, Democrats see a potential scandal that could permanently harm Republican Gov. Chris Christie, who has been riding high as a prospective 2016 presidential candidate.

In September, two of Christie’s top appointees at the Port Authority of New York and New Jersey ordered the lanes abruptly shut to traffic, causing days of gridlock in Fort Lee. Democrats allege that the move was political retribution against the town’s mayor, Democrat Mark Sokolich, for not endorsing Christie for reelection this year.

With Democratic legislators and the news media continuing to dig up emails and other evidence, the two appointees involved in the lane closure have resigned.

Christie has claimed no advance knowledge of the incident and has denied any wrongdoing on the part of his administration. But that hasn’t kept Democrats here and in Washington from pouncing.

The goal is to puncture the image Christie carefully cultivated of himself since Superstorm Sandy in 2012 as a bipartisan bridge-builder and trustworthy, if pugnacious, executive. His detractors say the episode reveals Christie as who they say he really is — a nasty politician who bullies those standing in his way.

One Democratic leader said the “Bridge-gate” episode reveals the Christie administration’s “Nixon-like dirty tricks,” while another likened it to Watergate. A third speculated about impeachment.

George Norcross III, an influential Democratic figure in South Jersey and a sometime Christie ally, said Democrats should “be focusing on their own candidates and their own profile.”

“If I was a national Democratic leader, I’d be pretty concerned about circumstances involving the implementation of Obamacare right now versus trying to speculate as to who might be the Republican nominee in a number of years,” he said.

In Trenton, the charge has been led by Senate Majority Leader Loretta Weinberg, a 78-year-old Democrat who has been among Christie’s most aggressive foes.

“Do I think Gov. Christie called the Port Authority and said, ‘Close lanes’? No,” Weinberg said. “But do I think he’s helped to create an atmosphere where his political operatives think they’re free to use the biggest bridge in the world for punitive action against somebody? I have to believe that it has to do with politics because there is no other rational explanation for it.”

Christie’s advisers said they anticipate the controversy will be short-lived. But, if it comes up in a future campaign, they are prepared to defend him by pointing to his record fighting political corruption as U.S. attorney.

Still, the bridge incident has invited weeks of public scrutiny of Christie’s administration, including the depths of his political patronage at the Port Authority, whose multibillion-dollar budget is bigger than that of many states.

The two officials who resigned were political intimates of Christie: Bill Baroni served as deputy executive director while David Wildstein, a high school friend of Christie’s and a former mayor of their home town of Livingston, was director of interstate capital projects. A 2012 profile described Wildstein as Christie’s “eyes and ears within the byzantine agency.”

Wildstein ordered the lane closure beginning Sept. 6. Officials initially claimed it was part of a traffic study, but no evidence has surfaced supporting that.

“It was a juvenile high school prank orchestrated by a high school classmate of the governor’s,” said Assemblyman John Wisniewski, a Democrat who has led the probe as chair of the transit committee.

Initially, Christie tried to brush aside any suggestion that he had anything to do with Fort Lee’s traffic jam. “Unbeknownst to everybody, I was actually the guy out there,” Christie joked at a Dec. 2 news conference. “I was in overalls and a hat. … I was the guy working the cones.”

But last Friday, Christie appeared to take the matter far more seriously. He installed Deborah Gramiccioni, a former federal prosecutor, to take over for Baroni. And he fielded questions from reporters for about an hour, declaring, “We’re gonna turn the page now.”

But Democrats are determined not to let that happen.

“Welcome to the world that is 2016,” said Adrienne Elrod, communications director for the anti-Christie Correct the Record. “We’re watching every word that comes out of his mouth. … He’s been able to enjoy for the most part being a pretty popular governor, but he’s never really been tested on the national stage.”

In Trenton, Wisniewski has subpoenaed more internal documents and promised more hearings. And in Washington, Sen. John D. Rockefeller (D-W. Va.), chairman of the Transportation Committee, called for a “comprehensive investigation” into the lane closure.

The senior aide to Christie acknowledged privately that scrutiny of the governor intensified almost overnight after his easy reelection last month. As the front-runner for the GOP nomination, the aide said, Christie “fully expects” the scrutiny from Democrats and the news media to continue.

As Christie told reporters at his Dec. 2 news conference, “We’re not in Kansas anymore, Dorothy.”