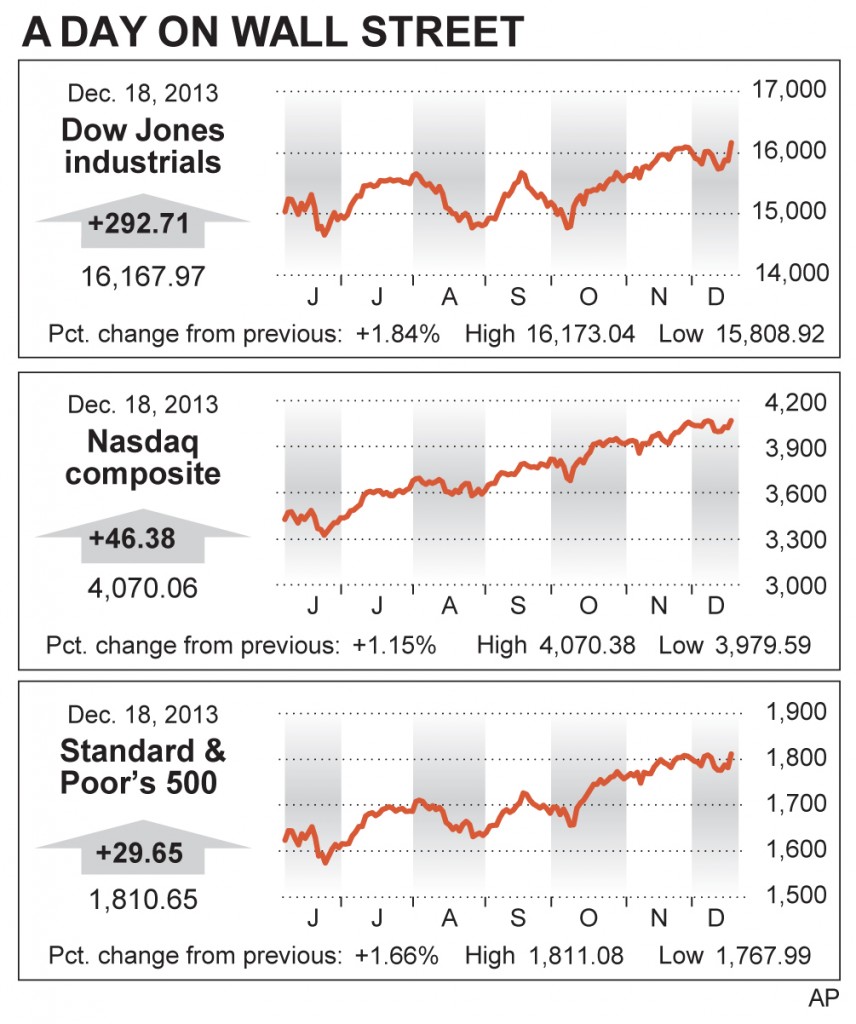 The stock market had a swift and clear reaction to the Federal Reserve’s decision to trim its stimulus efforts: That wasn’t so bad after all.

Stocks surged Wednesday, lifting the Dow Jones industrial average nearly 300 points to another record, after the Fed decided the economy was strong enough for it to begin a modest reduction of its bond purchases.

“Investors should see this as a vote of confidence for the economy,” said Kristina Hooper, head of U.S. investment strategies for Allianz Global Investors.

The central bank also tempered the impact of its pullback by signaling that it plans to keep short-term interest rates at record lows for longer than previously thought.

Investors had long anticipated the Fed would pull back on its purchases, but did not think it would happen until next year.

Because the market had grown accustomed to stimulus, some investors had worried about a decline in stocks once the market got less rocket fuel.

The rally adds to what has already been a historic run for stocks. The S&P 500 is up nearly 27 percent, its best yearly performance since the dot-com boom of the late 1990s.

The Fed’s decision removes a huge amount of uncertainty for investors, something they hate. The fate of the stimulus program had hung over investors’ heads since May. Now that investors have an outline for how the Fed will pull back, they can move forward.

“The Fed believed the market could handle it,” said Art Steinmetz, president and chief investment officer at OppenheimerFunds.

With no economic downturn on the horizon, stocks are expected to continue their rise in 2014. Market strategists predict gains of 6 percent to 8 percent.

Starting in January, the Fed will reduce its bond-buying program to $75 billion a month from $85 billion. The reductions, referred to on Wall Street as “tapering,” will be the first step toward winding down a program that has been in place, in one form or another, since the financial crisis.

By purchasing bonds and holding down long-term interest rates, the Fed has encouraged borrowing and hiring. But all that buying has also led investors to shift money into stocks. That’s because the Fed’s purchases make bond prices artificially more expensive in comparison to stocks.

The program has given the Fed a big role in the current bull market. The S&P 500 index has surged about 26 percent since the Fed announced a year ago that it would buy the $85 billion in bonds each month. And since the central bank’s first round of bond buying at the end of 2008, stocks have soared about 124 percent.

In the last month, as signs emerged of that hiring was picking up, the housing market was improving and manufacturing was strengthening, investors grew more confident that markets could gain traction without stimulus.

The Fed also said it is likely to keep cutting its bond purchases. Fed Chairman Ben Bernanke, who is nearing the end of his tenure, said the bank will likely vote for “measured reductions” at upcoming meetings, as long as the economy shows improvement.

Bernanke also said Janet Yellen, who becomes Fed chairwoman once she is confirmed by the Senate, “fully supports” the decision to start reducing the stimulus.

Wednesday’s pullback was unexpected for many. Strategists and economists thought the Fed would wait until March. It wound up being a welcome surprise.

“We finally have something in motion,” said Frank Davis, director of trading at LEK Securities “and we have details on how it’s going to work, so it’s something the market can embrace.”

The government bond market had a mild reaction to the Fed’s announcement. The yield on the benchmark U.S. 10-year Treasury note fluctuated throughout the day but ended up slightly at 2.89 percent, from 2.84 percent late Tuesday.

The dollar rose against the euro and yen.