Nobody wanted to stick their neck out on Tuesday.

The stock market edged slightly lower as the Federal Reserve started a two-day policy meeting that may herald the beginning of the end of its economic stimulus.

Few expect that the Fed will announce that it plans to pare back, or “taper,” its huge bond-buying program after its meeting wraps up on Wednesday. However, good news on the U.S. economy this month, including a blockbuster jobs report, and a budget deal in Washington, appeared to have increased the likelihood of a change.

“It’s just the taper drama, that’s really all the market seems focused on,” said Dean Junkans, CIO for Wells Fargo Private Bank. “The chances of them doing something tomorrow are higher than they were a month ago.”

A couple of big companies bucked the downward trend after pledging to hand more cash to stockholders.

Stocks have surged this year as the Fed kept buying $85 billion in bonds every month to hold down long-term interest rates. As well as boosting the economy, that stimulus has made stocks a more attractive investment compared to bonds. 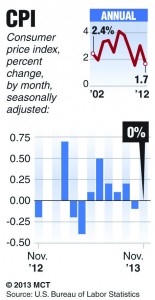 The only setbacks for the market this year have come when investors were nervous that the Fed was about to cut back its stimulus.

The S&P 500 index dropped 1.5 percent in June when Fed Chairman Ben Bernanke outlined a potential exit for the Fed from its stimulus strategy. The index fell 3.1 percent in August, when investors thought that the policy would change in September.

Instead of worrying about the market’s immediate reaction to the Fed’s announcement on Wednesday, investors should focus on the positive backdrop for stocks, said Liz Ann Sonders, chief investment strategist at Charles Schwab.

The economy is improving, companies are investing more, and earnings are forecast to grow at a steady rate, ensuring there will be demand for stocks.

“Dips that we get are not going to be terribly severe,” Sonders said.

In government bond trading, the yield on the 10-year Treasury note dropped to 2.84 percent, from 2.88 percent on Monday, as investors bought bonds on a day when the government said consumer prices remained flat. When prices rise, a trend known as inflation, the value of bonds falls.

Among other trends in the market:

Frontier Communications rose the most in the S&P 500. The stock jumped 47 cents, or 8.6 percent, to $4.78 after it reached a deal to acquire AT&T’s fixed-line business in Connecticut for about $2 billion.