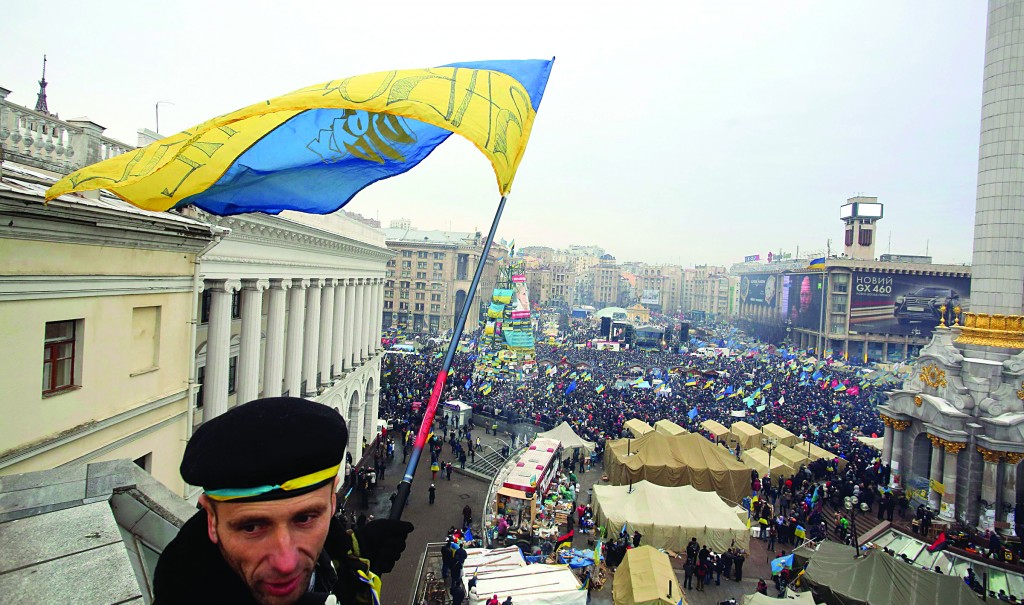 About 200,000 anti-government protesters converged on the central square of Ukraine’s capital Sunday in a dramatic show of morale after nearly four weeks of daily protests, but the rally was shadowed by suggestions that their goal of closer ties with Europe may be imperiled.

A much smaller demonstration of government supporters, about 15,000, was taking place about a kilometer (less than a mile) away from Kiev’s Independence Square. Anti-government protesters set up a tent camp there and erected barricades of snow hardened with freezing water and studded with scrap wood and junk.

U.S. Sens. John McCain and Chris Murphy joined the anti-government demonstration to express support for them and their European ambitions, threatening sanctions against the government of President Viktor Yanukovych if authorities use more violence to disperse the protests.

The protests began Nov. 21 after Yanukovych announced he was backing away from signing a long-awaited agreement to deepen trade and political ties with the EU and instead focus on Russia, and have grown in size and intensity after two violent police dispersals.

In the face of the protests, which present a serious challenge to Yanukovych’s leadership, Ukrainian officials this week renewed talks with the EU agreement and promised that they would sign the deal once some issues are worked out.

However, the EU’s top official on expansion issues, Stefan Fuele, cast doubt on the prospect Sunday, saying that work is “on hold” and that the words and actions of Yanukovych and his government are “further and further apart.”

Yanukovych backed off the agreement on the grounds that the EU was not providing adequate compensation to his economically struggling nation for potential trades losses with Russia. Russia, which for centuries controlled or exerted heavy influence on Ukraine, wants the country to join a customs union, analogous to the EU, which also includes Belarus and Kazakhstan.

The opposition says that union would effectively reconstitute the Soviet Union and remain suspicious that Yanukovych might agree to it when he meets Russian President Vladimir Putin on Tuesday.

Arseniy Yatsenyk, a top opposition leader, warned Yanukovych against making such a move.

“If the agreement is signed, he can remain in Moscow and not return to Kiev,” Yatsenyuk told the crowd at the protest on Independence Square, also known as the Maidan.

“What is happening on the Maidan today? It is an anticolonial revolution,” he said. “Above all, Ukrainians turned out to say to Moscow: ‘We are no longer under your command, we are an independent country.”

McCain, a Republican, and Murphy, a Democrat, told reporters after the rally that sanctions were possible and “that there will be consequences to our relationship if there is any more violence on the streets of Kiev.”