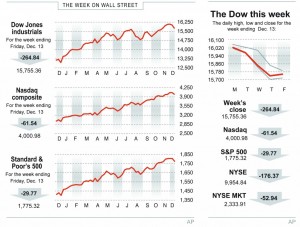 The rally that has driven stocks to record highs paused this week as investors tried to figure out where things are headed next.

Stocks were mixed on Friday and posted their second weekly loss in a row. Indexes reached record highs as recently as Monday, but then declined.

How come? Investors may be nervous that stocks are overpriced, that stock prices have grown faster than justified by profits. They may be worried about conflict with Iran, or the debate over federal spending. Some are worried the Federal Reserve will decide next week to reduce its economic stimulus, which has boosted stock prices.

Fantozzi noted that other bull markets have run for seven or eight years and peaked with higher prices compared to profits than what we’re seeing now.

All three indexes fell for the week despite strong reports on employment, housing, and retail spending. Investors have been worried that the stronger the Fed thinks the economy is, the more likely it is to stop buying $85 billion per month in bonds. The purchases have been aimed at keeping interest rates low, which makes it cheaper to borrow.

That has sent investors into stocks as they seek higher returns. The big indexes are up 20 percent or more this year.

The central bank’s policymaking committee meets next week and will announce any decisions on Wednesday.

Scott L. Wren, a senior equity strategist at Wells Fargo Advisors, believes the Fed will telegraph its intentions well in advance. Since they haven’t done that yet, it suggests they won’t act until the spring, he said. He also thinks the Fed could reduce its stimulus very slowly, easing the pain for financial markets.

“The Fed wants to err on the side of caution, and not do anything too crazy,” he said.

Half of the 10 industry groups in the S&P 500 rose, led by consumer discretionary stocks. Stocks with declines included energy and technology stocks, as Apple, Google, and Microsoft all dipped.

December is shaping up to be a poor month for the stock market. The Dow, S&P and Nasdaq are all down. If they finish December lower, it would be the first monthly decline since August and only the third down month for the year.

Anadarko Petroleum fell $5.37, or 6 percent, to $78.30, after a federal bankruptcy judge said the company may be liable for between $5 billion and more than $14 billion in a legal battle over the spinoff of a paint materials company. The ruling isn’t final.

The yield on the 10-year Treasury note fell slightly to 2.86 percent.

This article appeared in print on page 8 of the December 16th, 2013 edition of Hamodia.