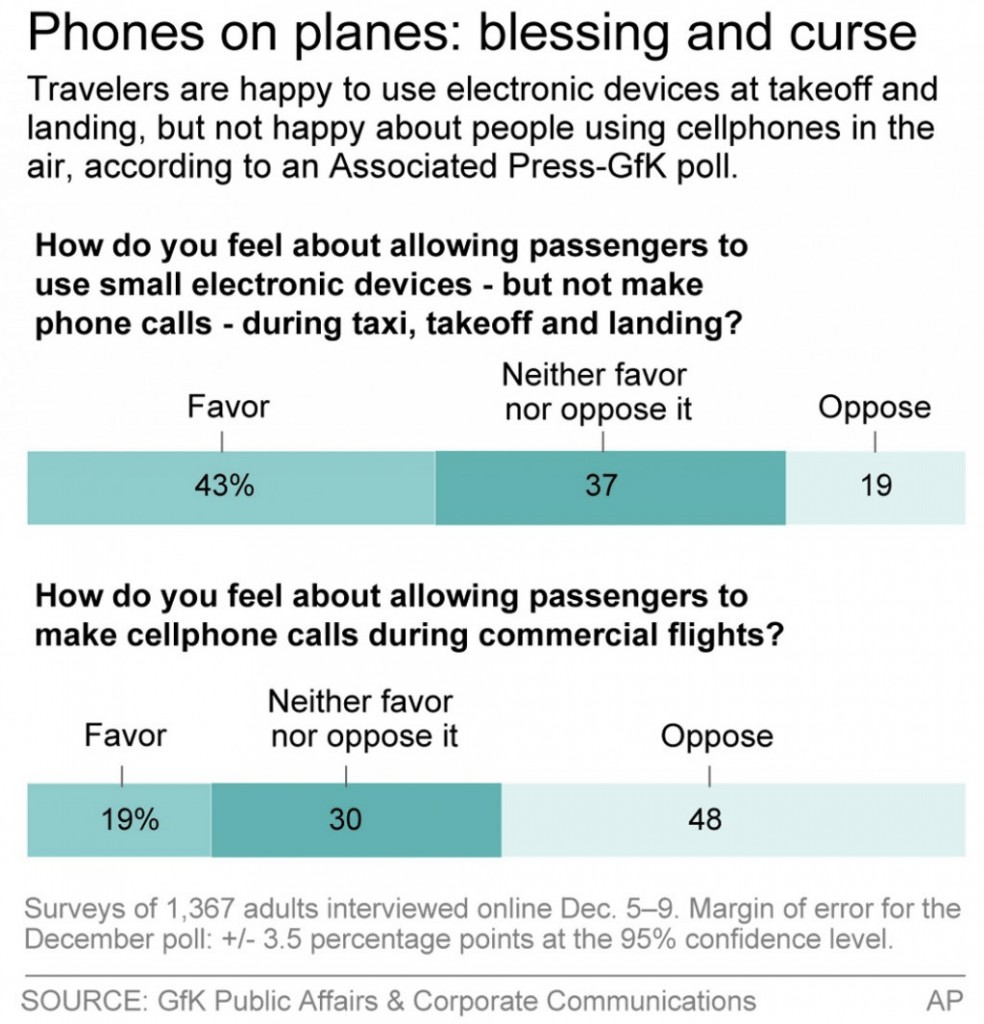 Just because it’s safe to use cellphones on a plane, it doesn’t mean that passengers should call just to say hello.

That argument played out across Washington Thursday as one government agency moved a step closer to removing its prohibition of in-flight calls while another considered a new ban of its own.

The Federal Communications Commission voted 3-2 to start a months-long public comment process to remove its restriction.

“There is a need to recognize that there is a new technology,” said FCC chairman Thomas Wheeler. “This is a technical rule. It is a rule about technology. It is not a rule of usage.”

But the Department of Transportation, which oversees aviation, isn’t so sure that permitting calls “is fair to consumers” and will consider creating its own ban as part of its consumer protection role.

Calls during flights have been prohibited for 22 years over fears that they would interfere with cellular networks on the ground. Technological advances have resolved those concerns, which is one reason Wheeler wants to repeal the rule. He also wants the airlines, not the government, to have final say on in-flight calling.

But even Wheeler acknowledged the potential annoyance factor.

“I’m the last person in the world who wants to listen to somebody talking” while flying, Wheeler told a House subcommittee Thursday morning.

The FCC proposal comes just weeks after the FAA lifted its ban on using personal electronic devices such as iPads and Kindles below 10,000 feet, saying they don’t interfere with cockpit instruments.

An Associated Press-GfK poll released Wednesday found that 48 percent of Americans oppose allowing cellphones to be used for voice calls while flying; just 19 percent support it. Another 30 percent are neutral. Among those who fly, opposition is stronger. Looking just at Americans who have taken more than one flight in the past year, 59 percent are against allowing calls on planes. That number grows to 78 percent among those who’ve taken four or more flights.

Delta Air Lines is the only airline to explicitly state that it won’t allow voice calls regardless of what the government allows. Delta says years of feedback from customers show “the overwhelming sentiment” is to keep the ban in place. American Airlines, United Airlines and JetBlue Airways all plan to study the issue and listen to feedback from passengers and crew.