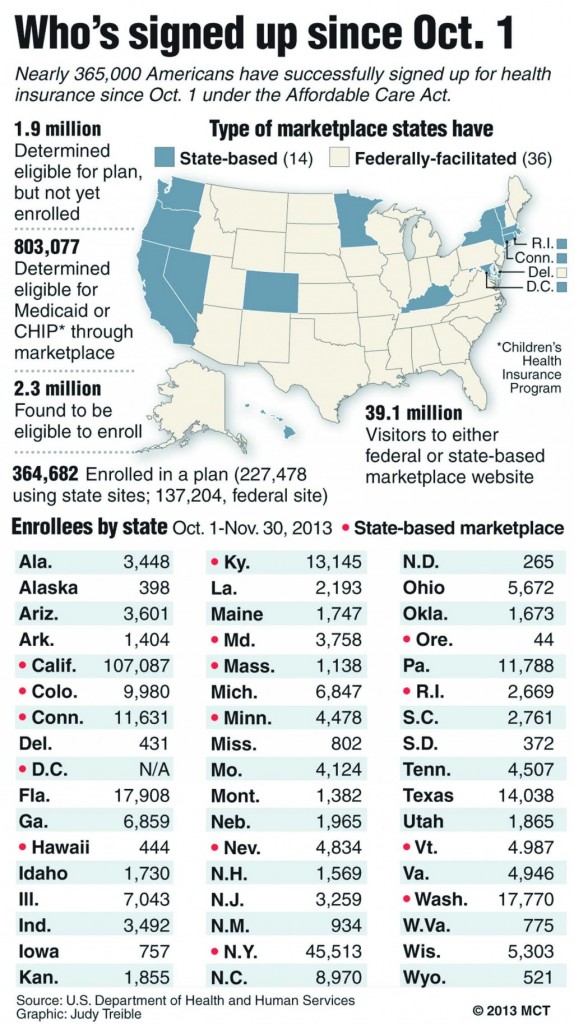 New sign-up numbers Wednesday showed progress for President Barack Obama’s health care law, but not enough to guarantee that Americans who want and need coverage by Jan. 1 will be able to get it. Crunch time is now, as people face a Dec. 23 deadline to sign up if they are to have coverage by New Year’s.

That means more trouble for the White House, too, after months of repairing a dysfunctional enrollment website. Next year could start with a new round of political recriminations over the Affordable Care Act, “Obamacare” to its opponents.

The Health and Human Services Department reported that 364,682 people had signed up for private coverage under the law as of Nov. 30. That is more than three times the October figure but still less than one-third of the 1.2 million that officials had projected would enroll nationwide by the end of November. The administration’s overall goal was to sign up 7 million people by next March 31, when open enrollment ends.

HHS Secretary Kathleen Sebelius assured Congress on Wednesday that “we are seeing very, very positive trends” now that HealthCare.gov is working reasonably well. She also announced that she’d asked the department’s inspector general for an independent investigation into contracting and management factors that contributed to the technology failure.

Yet the revamped federal website serving 36 states continues to have issues, and some states running their own sites also face problems. Oregon had signed up only 44 people as of Nov. 30.

That’s created stress and uncertainty, not only for the uninsured but also for other people who now have insurance but are seeking to avoid an interruption of coverage in January.

Those who are trying to preserve their coverage include some of the more than 4 million people whose individual plans were canceled because they didn’t measure up under the law — as well as hundreds of thousands who are in federal and state programs for people with serious health problems.

Democratic lawmakers say they are relieved the website is finally working, but some are not convinced the turnaround is complete.

Sebelius said at least 1.9 million people appear to be waiting just offstage to sign up. They’ve been found eligible to enroll but haven’t yet picked a plan.

If they’re all procrastinators who rush forward on Dec. 23, the website would be overwhelmed. It can only handle 50,000 people at a time.