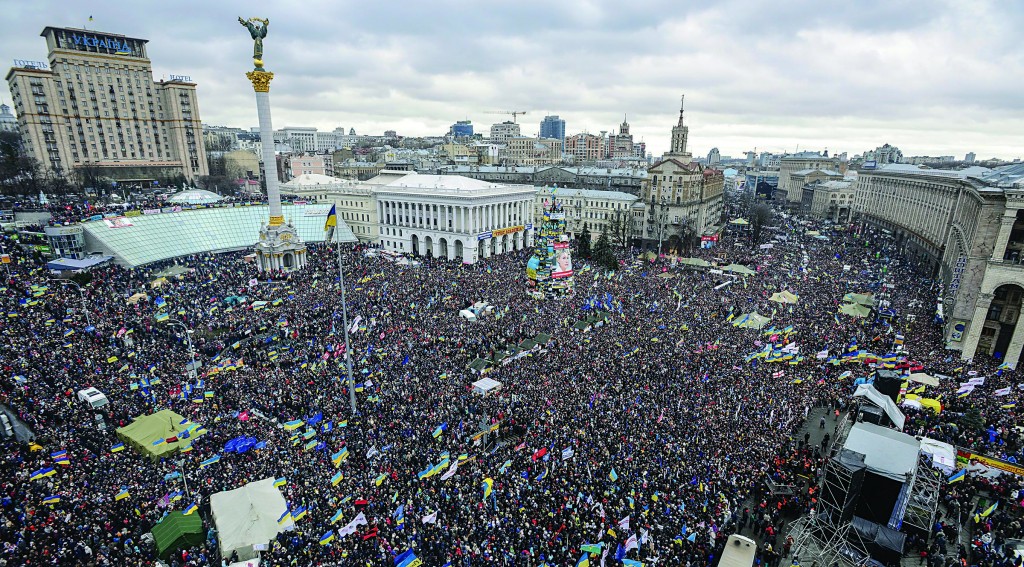 Hundreds of thousands of protesters poured into the streets of Ukraine’s capital on Sunday, toppling a statue of former Soviet leader Vladimir Lenin and blockading key government buildings in an escalating standoff with the president over the future of the country.

The biggest demonstration in the former Soviet republic since Ukraine’s pro-democracy Orange Revolution in 2004 led the government to fire back. It announced an investigation of opposition leaders for an alleged attempt to seize power and warned the demonstrators they could face criminal charges.

The West pressed for a peaceful settlement.

Hundreds of thousands of Ukrainians flooded the center of Kiev, the capital, to demand President Viktor Yanukovych’s ouster after he ditched ties with the European Union in favor of Russia and sent police to break up an earlier protest in the nearly three-week standoff.

“Ukraine is tired of Yanukovych. We need new rules. We need to completely change those in power,” said protester Kostyantyn Meselyuk, 42. “Europe can help us.”

Packing Independence Square, Ukrainians waving EU flags sang the national anthem and shouted, “Resignation!” and “Down with the gang!” in a reference to Yanukovych’s regime.

“I am convinced that after these events, dictatorship will never survive in our country,” top opposition leader Vitali Klitschko told reporters. “People will not tolerate when they are beaten, when their mouths are shut, when their principles and values are ignored.”

As darkness fell, the conflict escalated further, with protesters blockading key government buildings in Kiev with cars, barricades and tents.

The protests have had an anti-Russian component because Russia had worked aggressively to derail the EU deal with threats of trade retaliation against Ukraine.

About half a mile from the main square, a group of anti-government protesters toppled the city’s landmark statue of Lenin and decapitated it Sunday evening. Protesters then took turns beating the torso of the fallen statue, while others lined up to collect a piece of the stone. The crowd chanted, “Glory to Ukraine!”

The demonstrations erupted last month after Yanukovych shelved a long-planned treaty with the 28-nation European Union to focus on ties with Russia. They were also galvanized by police violence and fears that Yanukovych was on the verge of bringing his country into a Russian-led economic alliance, which critics say could end Ukraine’s sovereignty.

A solution to the crisis appeared elusive, with the government making no concessions and the opposition issuing contradictory statements on how to proceed.

Heeding the opposition’s calls, thousands of protesters blocked the approach to key government buildings in Kiev. “We are going to fight until victory,” opposition leader Arseniy Yatsenyuk told protesters in Independence Square, which was drowning in a sea of flags.

The protest Sunday in sub-zero temperatures took place in Independence Square, known as the Maidan, in an echo of the Orange Revolution. Those protests annulled Yanukovych’s fraud-tainted presidential victory in 2004 and ushered his pro-Western opponents into power. Yanukovych returned to the presidency in the 2010 vote.