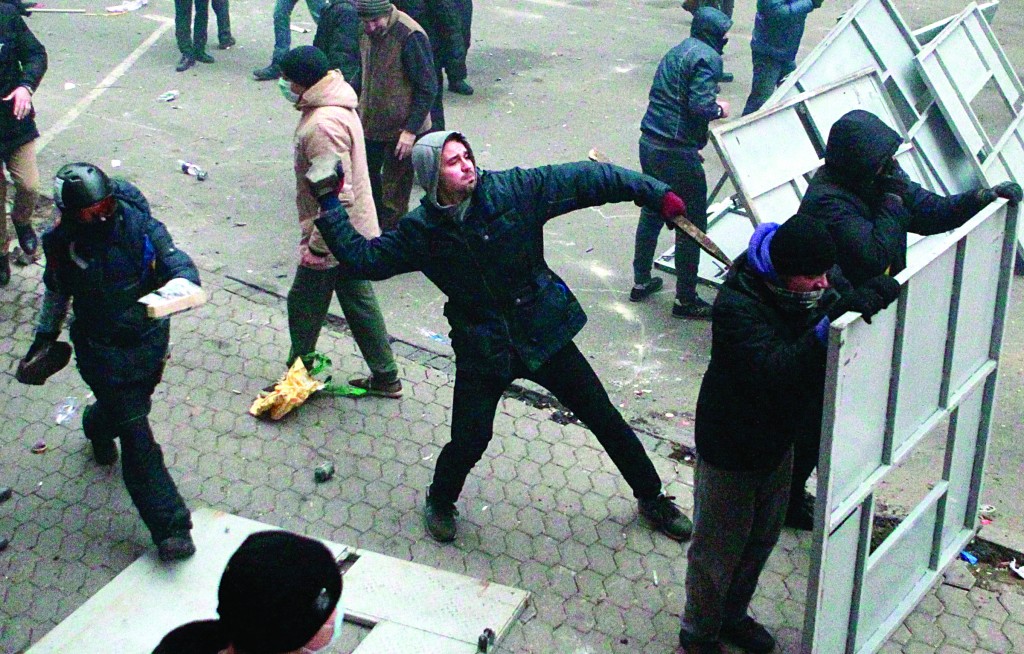 A protest by about 300,000 Ukrainians angered by their government’s decision to freeze integration with the West turned violent Sunday when a group of demonstrators besieged the president’s office and police drove them back with truncheons, tear gas and flash grenades. Dozens of people were injured.

The mass rally in central Kiev defied a government ban on protests in Independence Square, in the biggest show of anger over President Viktor Yanukovych’s refusal to sign a political and economic agreement with the European Union.

The protesters also were infuriated by the violent dispersal of a small opposition rally two nights before.

While opposition leaders called for a nationwide strike and prolonged peaceful street protests to demand that the government resign, several thousand people broke away and marched to Yanukovych’s nearby office.

A few hundred of them, wearing masks, threw rocks and other objects at police and attempted to break through the police lines. After several hours of clashes, riot police used force to push them back. Dozens of people with what appeared to be head injuries were taken away by ambulance.

Opposition leaders denounced the clashes as a provocation aimed at discrediting the peaceful demonstration and charged that the people who incited the storming of the presidential office were government-hired thugs.

Opposition leaders in Independence Square demanded that Yanukovych and his government resign. “Our plan is clear: It’s not a demonstration, it’s not a reaction. It’s a revolution,” said Yuriy Lutsenko, a former interior minister who is now an opposition leader.

The opposition leaders urged Ukrainians from all over the country to join the protests in the capital.

The U.S. Embassy issued a joint statement from U.S. and EU ambassadors encouraging Ukrainians to resolve their differences peacefully and urging “all stakeholders in the political process to establish immediate dialogue to facilitate a mutually acceptable resolution to the current discord.”

Protests have been held daily in Kiev since Yanukovych backed away from an agreement that would have established free trade and deepened political cooperation between Ukraine and the EU. He justified the decision by saying that Ukraine couldn’t afford to break trade ties with Russia.

The EU agreement was to have been signed Friday and since then the protests have gained strength.

“We are furious,” said 62-year-old retired businessman Mykola Sapronov, who was among the protesters Sunday. “The leaders must resign. We want Europe and freedom.”