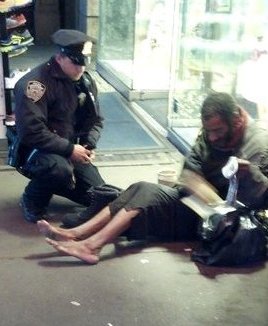 A NYPD officer who made headlines a year ago for buying boots for a homeless man was promoted to the rank of detective on Tuesday.

An image taken by a tourist of Officer Lawrence DePrimo giving the boots to the man in Times Square last November went viral.

At Tuesday’s promotion, DePrimo told the Daily News that some people still come up to him about his two days of fame.

“I still get people coming up to me and saying, ‘What you did inspired me to do a great thing for another person,’“ he said. “The nameplate on my desk reads Larry (Boots) DePrimo,” he joked.

DePrimo did not know he was being photographed when he squatted next to the barefoot homeless man on a cold night in Times Square last month and asked him his shoe size. He then disappeared and returned with a new pair of boots, which he helped the man put on.

That picture awed the millions of people who have seen it since.

DePrimo, then 25, was working on a counterterrorism assignment for the New York Police Department when he met Jeffrey Hillman on November 14. His kindness would have gone unnoticed if not for Jennifer Foster, a civilian communications director for the Pinal County Sheriff’s Office in Arizona who was on vacation in the Big Apple.

DePrimo, who lives with his parents on Long Island, was shocked at the attention. He was not warned before the photo was publicized, since the officer in the picture was not identified until hours later.

“It was freezing out and you could see the blisters on the man’s feet,” DePrimo said. “I had two pairs of socks and I was still cold.”

The two started talking, and as Hillman walked slowly down Seventh Avenue on his heels, the cop went into a Skechers shoe store and asked Jose Cano, the manager, for a pair of boots. Impressed with his humanity, Cano gave the officer his employee discount to bring down the regular $100 price to a little more than $75.

“We were just kind of shocked,” Cano said. “Most of us are New Yorkers and we just kind of pass by that kind of thing. Especially in this neighborhood.”

“He was the most polite gentleman I had met,” DePrimo said, adding that Hillman’s face lit up at the sight of the boots. DePrimo offered him a cup of coffee, but “as soon as the boots were on him, he went on his way, and I just went back to my post.”

As for Hillman, he still wears the pair of shoes to this day.