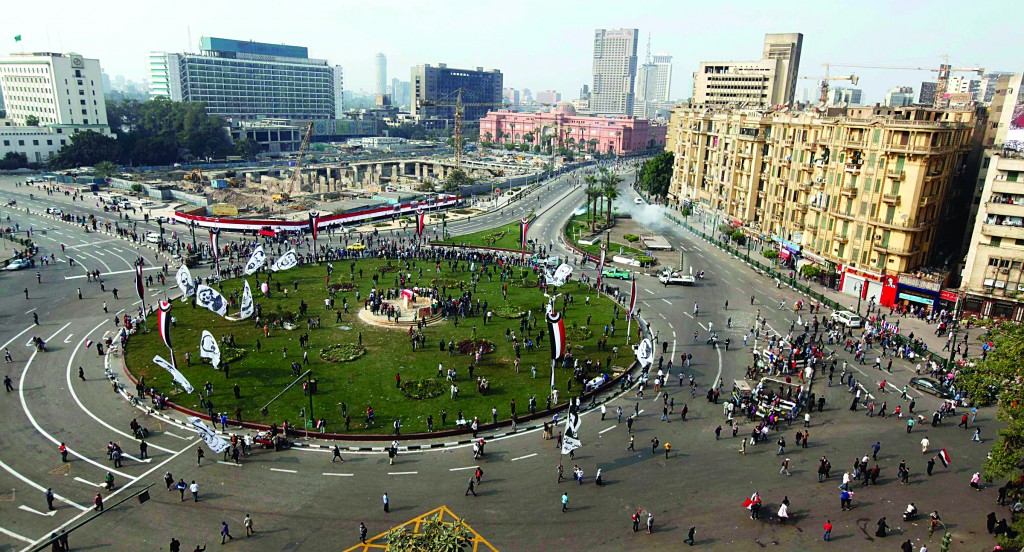 Egypt’s Islamist activists, overshadowed since leading the 2011 uprising against Hosni Mubarak, showed a new vigor Tuesday, scuffling with supporters of the military-backed government in Cairo’s Tahrir Square and wrecking a state memorial dedicated to slain protesters only hours after it was inaugurated.

The vandalizing of the memorial reflected the youth activists’ anger against what they see as an attempt by the current military-backed rulers, boosted by popular support since the July coup against Islamist President Mohammed Morsi, to paper over past bloodshed and rewrite history.

The interim prime minister inaugurated the memorial’s empty base — a statue to top it is planned later — with great fanfare on Monday afternoon. By Tuesday morning, the pedestal was reduced to a lump of concrete covered in revolutionary graffiti after activists before dawn ripped off its stone cladding and spray-painted it with slogans denouncing both Morsi and his nemesis, military chief Gen. Abdel-Fattah el-Sisi.

“The revolution continues,” one slogan across it proclaimed. “Down with all those who betrayed — military, former regime, or Muslim Brotherhood.” Activists set a mock coffin draped with the Egyptian flag onto the pedestal.

Secular, leftist youth activists were at the forefront of Egypt’s revolutions, starting with the 2011 uprising that ousted Hosni Mubarak. But they have been overshadowed since. They have also been divided over how to deal with the new order after the military removed Morsi, the country’s first freely elected president, on July 3 following massive protests against him.

Since then, the streets have been dominated by pro-military rallies or smaller, near daily protests by Morsi’s backers, amid a heavy crackdown on Islamists. Non-Islamist critics of the new leadership have been reluctant to speak out for fear of being seen as supporting the Brotherhood and Morsi, whom they also sharply oppose.

But revolutionary groups were energized by the second anniversary Tuesday of the “Mohammed Mahmoud” clashes — one of the fiercest confrontations between protesters and security forces, named after the street off Tahrir where they took place.

On Tuesday afternoon, they turned out in small numbers in the square — a few thousand — but their return to Tahrir was a rare anti-military protest by the secular revolutionaries since Morsi’s ouster.

“We are against both the Brotherhood and the military because they did not do anything for the revolution,” said Omar el-Sibai, a 19-year-old architecture student. “And now if anybody says his opinion and is against the authorities, he is either a terrorist or Brotherhood.”

Like others in the Square, he denounced authorities for setting up a memorial to martyrs while neglecting a top demand of the revolution — retribution against those behind the killing of protesters.

Chants to drum beats echoed in Tahrir Square: “Both the military and the Brotherhood can’t be trusted,” and, “El-Sissi, it is now your turn.” A banner in the Square showed Morsi, el-Sissi and four other Brotherhood and military officials, with nooses around their necks.

Scuffles erupted when a group of supporters of the military also entered, carrying portraits of el-Sissi — whose birthday was on Tuesday. The two sides hurled stones at each other in intermittent clashes as activists chased out the military backers. Police fired one volley of tear gas, but largely stayed clear of the Square.

Shortly before midnight, black-clad anti-riot police made a final push, firing heavy tear gas, and police vehicles swept through the Square dispersing the demonstration. Shortly after, army vehicles drove in and closed some entrances to Tahrir Square.