Boeing Takes $100B in Orders From Gulf 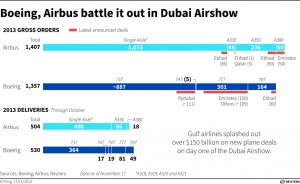 U.S.-based Boeing Co. dominated on the first day of the Dubai Airshow, netting $100 billion in orders at an event that showcased the spending power and aggressive expansion efforts of the Middle East’s Gulf Arab carriers.

The 342 orders represented more than twice the value of those seen by European rival Airbus, which said it took 142 orders worth some $40 billion.

The massive commitments came from just four carriers in the tiny nations of Qatar and the United Arab Emirates, which are in a race to create more jobs for their own citizens and diversify their oil-dependent economies.

“In recent years, much of the action in global aviation has shifted to the Middle East, because countries like the U.A.E. and Qatar have tapped into our geographical advantage to build a new air transport connection for the world,” Sheikh Ahmed bin Saeed Al Maktoum, chairman of Emirates and the smaller flydubai, told reporters.

Of the major Gulf Arab carriers, Dubai-based Emirates airline flexed its buying power the hardest, with orders for 150 of the planned Boeing 777x’s at a combined price tag of $55.6 billion. The aircraft is a larger and more fuel-efficient model of the company’s popular 777 wide-body.

The airline also announced orders for 50 Airbus A380s — the main competition for the 777X. Airbus says the planned purchase is listed at $23 billion.

The Dubai Airshow is seen as an increasingly important barometer on the state of the aviation industry and the rising roles of the big-spending Gulf carriers Etihad, Qatar Airways, Emirates and flydubai as they compete for routes and critical stopover traffic between Asia and Europe and the Americas.

This year’s event, which also included announcements of promised purchasing rights for dozens more aircraft, surpassed the record $155 billion in deals in 2007’s edition, before the global economic downturn.

The five-day aviation trade show’s location, at the new Dubai World Central airport’s grounds, further reflects the Gulf Arab region’s own rapid growth in the aviation industry. Dubai hopes the new airport will be the largest in the world and the most frequented transit hub, connecting European and Asian travelers.

Plans call for most of the traffic from Dubai’s current airport to be eventually shifted to the new facility, which officials say could one day handle 160 million passengers a year as part of the region’s growing profile as a global aviation hub. It remains unclear whether Dubai will continue to operate both airports or eventually move traffic entirely to the new airport grounds.

“To me, what’s happening at Dubai World Central, Dubai (International) Airport, Emirates Airline and flydubai, all this reflects the growth of aviation globally and in this region,” Al Maktoum of Emirates and flydubai said.

For Boeing and Airbus, the Gulf Arab region has become a key battleground for new aircraft and big-ticket orders that can shape the companies’ outlooks for years.

Boeing received orders at the airshow for 150 777X planes from Emirates, 50 from Qatar Airways and 25 from Abu Dhabi’s Etihad Airways, the Chicago-based manufacturer and the airlines announced in separate news conferences. Boeing also inked deals with Etihad for 30 of its 787-10 Dreamliners and one cargo plane, and with budget carrier flydubai for 86 aircraft, mostly its single-aisle 737 models.

The Dreamliner deal is an important nod of support in the Gulf for the troubled aircraft, which has suffered groundings in the past year over battery problems.

The 777X orders come even as Boeing looks for alternative sites to develop the plane after machinists in the Seattle area rejected a long-term contract.

The long-range, twin-aisle 777 holds about 365 passengers, making it Boeing’s second-biggest plane. Since its first flight in 1994, it’s been a best-seller for Boeing, which has sold more 777s than any of its other current large planes.

In May, it began offering the revamped 777X. Boeing is still finalizing plans for the plane – aiming to deliver the first aircraft by the end of the decade – but it has said it is expected to carry as many as 400 passengers and be more fuel-efficient than the current 777. Previously, Lufthansa had made a commitment for 34 of the 777X’s.

With almost $78 billion in combined purchasing commitments announced at the opening of the five-day airshow, Emirates airline cemented itself as one of Boeing and Airbus’s largest and most important clients. The airlines said some of the new aircraft will replace existing ones and others will be used in the company’s expansion.

The airline’s chairman said Sunday’s announcements will likely scare some of his competitors who are fighting to preserve monopolies on landing rights at airports in their home countries. Al Maktoum added that aviation industry manufacturers must work to try and ease those kinds of restrictions; “otherwise, why would we buy something and not allow us?”

“Then they can take the aircraft back,” he said. “But I don’t think something like this will happen. I always look that the future will be positive and we’ll be allowed to fly to more and more destinations.”