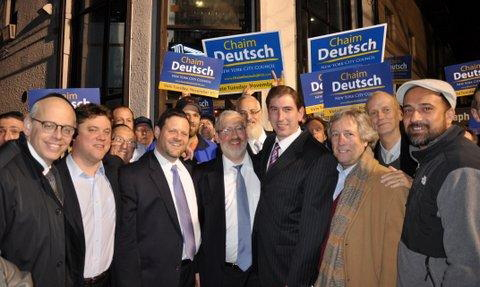 “This is our community’s victory,” Leon Goldenberg, one of a group of askanim who worked to elect Deutsch, told Hamodia. “We took back the 48th [district] which was rightfully ours.”

Deutsch, the Jewish liaison to the outgoing, term-limited Councilman Michael Nelson, defeated Republican David Storobin by a 55 to 39 percent margin.

“Throughout this campaign, I have walked the streets of this district. I have met the people and I have listened to their concerns,” Deutsch, a Democrat, said during his victory party. “I understand the unique difficulties that face the residents of this district and I am eager to tackle the issues.”

For his victory, Deutsch assembled a broad coalition of voters from the Orthodox, Chinese and Pakistani communities to counter the Russian vote that was expected to go to Storobin, a native of the former Soviet Union.

The race for Deutsch’s seat actually began last year, when the redistricting commission reduced the Orthodox population in the district from nearly 50 percent to its current 30 percent. Over three series of hearings, Orthodox askanim argued that they wanted a second Orthodox-majority district to reflect their numbers.

In the end, the district remained the way the commission assigned it, with some referring it as a “super Russian” district.

In an upset, Deutsch ended up winning the Democratic primary over Ari Kagan, the establishment candidate, and won Tuesday easily over Storobin, a former state senator.