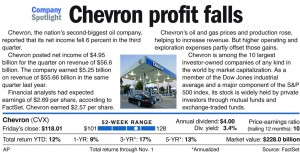 The nation’s second-biggest oil company posted net income of $4.95 billion for the quarter, on revenue of $56.6 billion. The company earned $5.25 billion, on revenue of $55.66 billion, in the same quarter last year.

The latest earnings amounted to $2.57 per share. Analysts had expected earnings of $2.69 per share, on average, according to FactSet.

But higher operating expenses and exploration costs offset those gains. The company’s oil and gas exploration and production earnings fell 1 percent in the quarter.

Pavel Molchanov, an analyst at Raymond James, called the results “not ideal,” but said there were “no major disappointments.”

Weak refining results further eroded profits. Refining profit fell by 45 percent in the quarter, because input costs – such as crude oil – stayed high, while prices for fuel products – such as gasoline – fell.

Chevron is in the midst of an enormous capital spending plan, as it builds liquefied natural gas export facilities in Australia and new deepwater production platforms in the Gulf of Mexico. The company expects to spend a record $36.7 billion this year on these and other projects.

Yarrington told investors Friday to expect Chevron to sell some of its smaller or less promising oil and gas exploration and production assets to help raise cash. Capital spending nearly used up all of the company’s cash flow in the quarter, and the company spent $1.25 billion in the quarter to buy back shares.

This article appeared in print in the November 4th, 2013 edition of Hamodia.