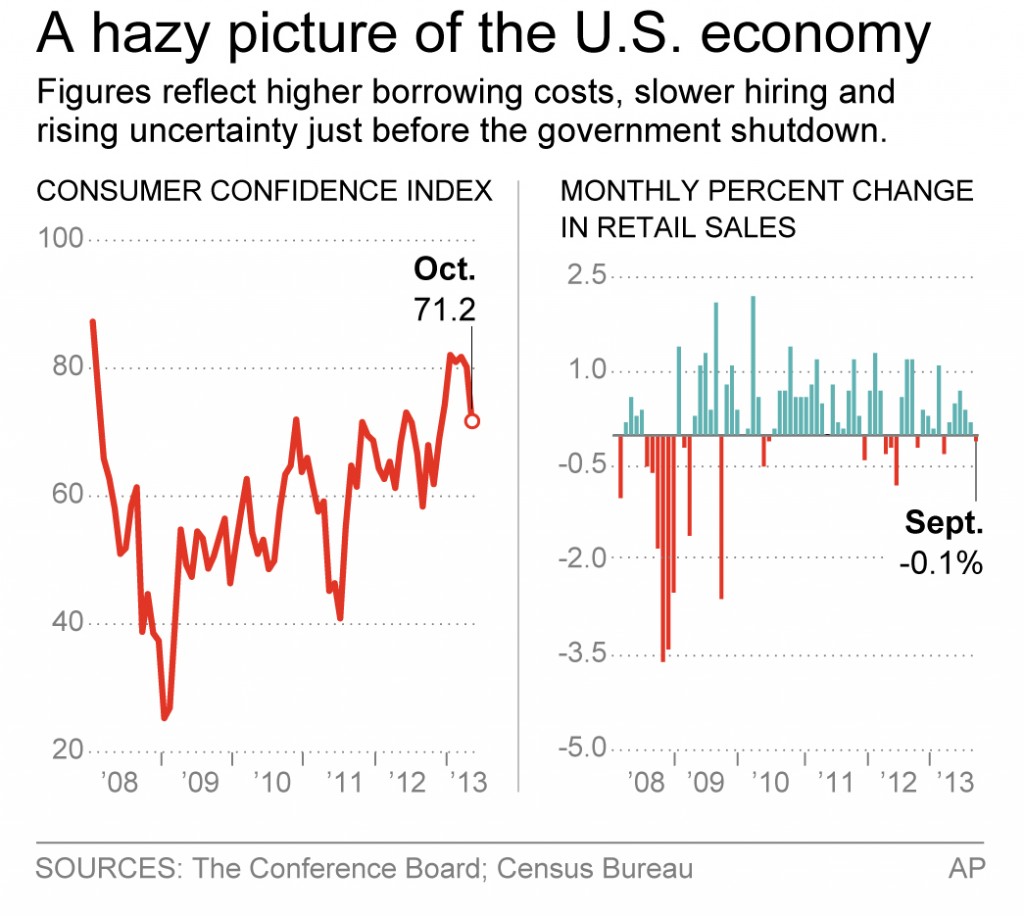 A sharp drop in auto sales caused largely by a calendar quirk lowered U.S. retail spending in September. But Americans spent more on most other goods, showing some confidence in the economy before much of the government shut down.

Auto sales fell 2.2 percent, the largest decline since October 2012. But the drop occurred largely because the sales calendar pulled Labor Day weekend activity into August, automakers have said. That means the drop was likely temporary.

Excluding autos, gas and building supplies, sales rose 0.5 percent in September, up from 0.2 percent in August. Economists exclude those categories because they tend to be volatile.

Outside of autos, nearly all retailers reported higher sales, including furniture stores, electronics and appliance retailers, and grocery stores. Sales at clothing stores and department stores were the only others aside from autos to decline.

Spending was particularly healthy in several discretionary categories, such as restaurants and bars, electronics and appliance stores, and sporting goods stores. That suggests that the impact of tax increases imposed at the beginning of the year may be waning, several economists said.

“Generally speaking, the worst of the hit … may be behind us,” said Dan Greenhaus, chief global strategist BTIG, a brokerage firm.

Retail sales are closely watched because they’re the government’s first report each month on consumer spending, which accounts for 70 percent of U.S. economic activity.

Americans have increased their spending modestly this year. But slower job growth and minuscule pay raises could make them less inclined to open their wallets. And the 16-day partial government shutdown sent consumer confidence plunging to a six-month low in October.

The Conference Board said Tuesday that its index of consumer confidence dropped to 71.2 in October, down from 80.2 the previous month. September’s figure was revised slightly higher.

Consumers became particularly pessimistic in their outlook on the economy six months from now, while their assessment of current economic conditions declined by much less. They also expect less hiring in the months ahead.

Employers added an average of just 143,000 jobs a month from July through September. That’s down from 182,000 a month from April through June and 207,000 in the first three months of the year.

Sluggish spending is likely to weigh on growth. Most economists predict growth slowed in the July-September quarter to an annual rate of about 1.5 percent to 2 percent, down from a 2.5 percent rate in the April-June quarter. And the shutdown is likely to keep growth at a sluggish pace for the final three months of the year.

The retail sales report was delayed by the shutdown. It was originally scheduled to be released Oct. 11.