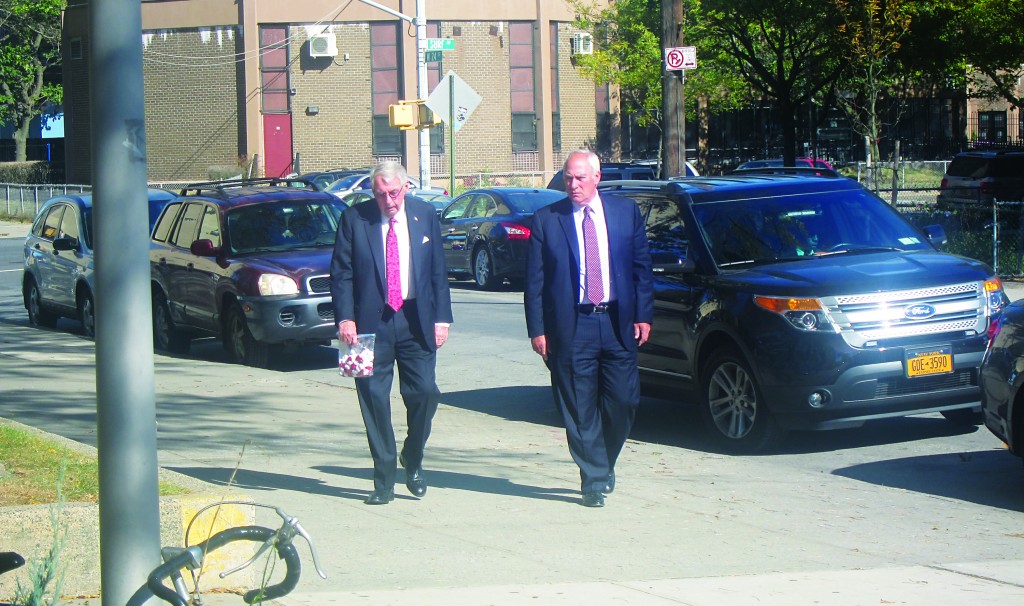 Standing before a crowd of Russian-speaking seniors at a Coney Island senior center, Charles Hynes raised his left hand, appealing for quiet amid the Slavic.

“Who would like me to stay on as DA?”

A smattering of hands hesitantly went up, as if unsure what the nice man was saying but not wanting to disappoint him.

Alexander Gurevich, Hynes’s liaison to the Russian community, then took the mic and repeated the question, this time in Russian. This time, all hands shot up.

“You see,” a Hynes aide tells a Hamodia reporter who went along with the campaign. “This is how it was, thousands of emails, calls, texts, telling him that they want him to stay.”

When Hynes lost his bid for a seventh term as Brooklyn’s district attorney in a Sept. 10 primary, he announced that he was seeking a smooth transition to the victor, former prosecutor Kenneth Thompson, and went on a previously scheduled vacation.

As is usual on his vacations, Hynes was unplugged from the world, calling in to the office occasionally to hear what was going on. He says he was stunned to hear of a deluge of pleas from across the borough for him to remain as Brooklyn’s top prosecutor, a job he has been at since 1990.

So he decided, at the instigation of state Sen. Martin Golden (R-Flatbush) and the state GOP and Conservative party, to run again, this time on the Republican and Conservative state party lines.

In an interview after the senior center event explaining his decision, Hynes hardly mentioned Thompson by name, referring to him as “the fellow who won the primary” or “my opponent.”

He says that he understands completely the Democratic elected officials — and even his own former campaign manager, George Artz — who now back Thompson. But the vast majority of voters have yet to speak, he says, and he was running now to ensure they have a voice.

“Look, the fellow who won the primary won by just less than 10 percent of the 18 percent who showed up,” says Hynes, 78. “So 82 percent of the Democrats did not show up on primary day. And this decision I made, once I was told I would have the resources to make the run, the decision I made to run on the party lines of the two political parties who endorsed me, just as the Democratic committee endorsed me, was in part because I wanted to make it permissible for the 82 percent of the Democrats to vote on who would be their DA for the next four years. And all the voters in Brooklyn.”

Hynes’s confidence appears as robust now as during the primary, when he assured Hamodia that he had the votes of the Orthodox and African-American communities. While he received the majority of votes in heavily Orthodox areas, he lost the black vote by a wide margin.

Some of that boldness was still on display during the interview, when he said that meetings various Jewish groups have had with Thompson since the primary do not mean anything since they have been “disastrous.”

Hynes, who had said before the primary that “the black community, by and large, is mine,” said he was surprised that they ended up voting for Thompson.

“All of the programs that I have created have had a disproportionate positive benefit on their children and their loved ones and on their friends and neighbors,” he says. “So I believe, again, that I will get a significant vote from the African-American community despite the fact that he is African-American.”

Hynes says the reason he decided to take another bite out of the apple was when he heard of the leadership of Clarence Norman Jr., “the corrupt county chairman [of the Democratic party], whom I put in prison,” in running Thompson’s Election Day campaign — “and then Ken Thompson denied it.”

Despite firm denials by Thompson, Hynes said that Norman — whom he refers to as his opponent’s “third rail” — had claimed credit after Thompson’s win in phone conversations repeated to Hynes, and that his son had seen Norman at Thompson’s victory party.

He also claimed that “everyone is beginning to understand” that Norman had met with Thompson “for months” at his father’s church, plotting the campaign.

“I put Clarence in prison; he put him on his payroll,” he says.

However, that is not enough to win elections, and Hynes reportedly had depleted his campaign funds during the primary.

Political observers say that Hynes needs to raise at least $2 million to run a successful comeback. While he raised $150,000 at a publicized fundraiser at the beginning of October, he says that he has since raised much more money, “enough money to go on radio … to have our mailings, to [mount a] get-out-the-vote campaign that is going to win.”

And Hynes, an Irish Catholic who is married with five children and 18 grandchildren — “I am a frum goy,” he jokes — has been walking the streets, pressing  flesh, going to subway stops and visiting senior centers.

While a video Monday showed passersby in Bensonhurst ignoring Hynes as he attempted to shake their hands, at the senior center he was greeted like a homecoming hero.

Hynes told the approximately 100 seniors and aides in comments translated immediately, that as a young boy growing up in a home with a violent father, “the person that protected me during that period was my 85-year-old grandfather.”

“I didn’t get the chance to pay back his love and protection until many years later when there was a scandal in the nursing home industry in New York state,” he said, describing briefly his efforts at prosecuting and jailing the individuals responsible.

“Now I know you’re all going to have lunch so I’m going to finish,” Hynes said to sustained applause. “So if you want all of this to continue, please remember me on November the fifth. Please.”

An elderly worker at the home approached the podium and told Hynes that out of the 119 residents, 117 of them voted in the primary, all of them for him — “and I hope that it will be the same [in the general election].”

“What I’m getting all across Brooklyn is a great deal of powerful support,” Hynes said, mentioning his endorsement that day by the Vaad Harabbanim of Flatbush.

“Nothing changed about me; I’m a lifelong Democrat. And because I lost the Democratic primary doesn’t change the politics. So I run on the Republican/ Conservative line, but I run as a progressive Democrat.”

Hynes portrays his rival as unprepared to take over the office, the largest in the nation, and unqualified to have any position of leadership.

“This guy will say whatever comes into his head, whatever he believes will help him get elected,” he says. “He trashed my programs all summer; he called me a social worker. He now says that the programs are good programs, that they’re terrific and he is thinking of continuing them.

“The problem with my opponent is, he has absolutely no experience, no qualifications to run an office of 1,200 people and 500 lawyers. In five years as a prosecutor, he was never promoted to a supervisory position. He’s never run anything. It would be an absolute shande if he became the Brooklyn district attorney.

“I believe on November the fifth, voters everywhere, whether they be Democrats or Republicans or independents or progressives or conservatives — they are going to vote for me. Because they know that I have delivered for them. I took a county that in 1990 was the fifth-most violent in America, and 13 years later Money Magazine said we’re one of the 10 best places to live in America. And I built on that level of safety every year.