Dow Closes at a Record High as Fed Meeting Begins 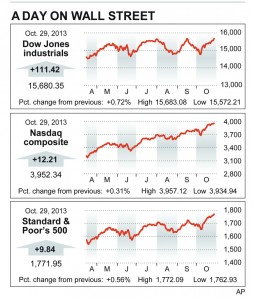 Investors drove the Dow Jones industrial average to an all-time high Tuesday on expectations that the Federal Reserve will keep its economic stimulus program in place.

The Fed is in the middle of a two-day policy meeting at which it’s expected to maintain its $85 billion worth of bond purchases every month. That program is aimed at stimulating economic growth by keeping borrowing rates very low. The Fed will announce its decision Wednesday afternoon.

“The expectation that the Fed remains clearly on hold is the catalyst for this march higher,” said Quincy Krosby, a market strategist at Prudential Financial.

About half the companies in the S&P 500 have reported earnings for the third quarter. So far, most are doing better than investors expected. Companies in the index are forecast to log third-quarter earnings growth of 4.5 percent, according to data from S&P Capital IQ.

The Nasdaq Stock Market was hit with another glitch. Nasdaq indexes weren’t updated from 11:53 a.m. to 12:37 p.m. because of a technical problem that was caused by human error, the exchange operator said in a statement. Trading of Nasdaq-listed stocks wasn’t affected.

On Sept. 4, the Nasdaq had a brief outage in one of its quote dissemination channels, but trading wasn’t disrupted. On Aug. 22 the exchange suffered a three-hour trading outage that was also attributed to problems with the exchange’s price disseminating system.

Two economic reports came in relatively weak, which may have encouraged some investors by suggesting that any slowdown in the Fed’s stimulus could be a ways off.

Retail sales fell 0.1 percent in September, the weakest showing since March, as auto sales dipped. Americans’ confidence in the economy fell this month to the lowest level since April. People were worried about the impact of the 16-day partial shutdown of the U.S. government.

“The data that has been the most attractive to (stock) markets seems to be the data that maintains the status quo,” said Brad Sorensen, the director of market and sector analysis at the Schwab Center for Financial Research.

This article appeared in print on page 40 of the October 30th, 2013 edition of Hamodia.