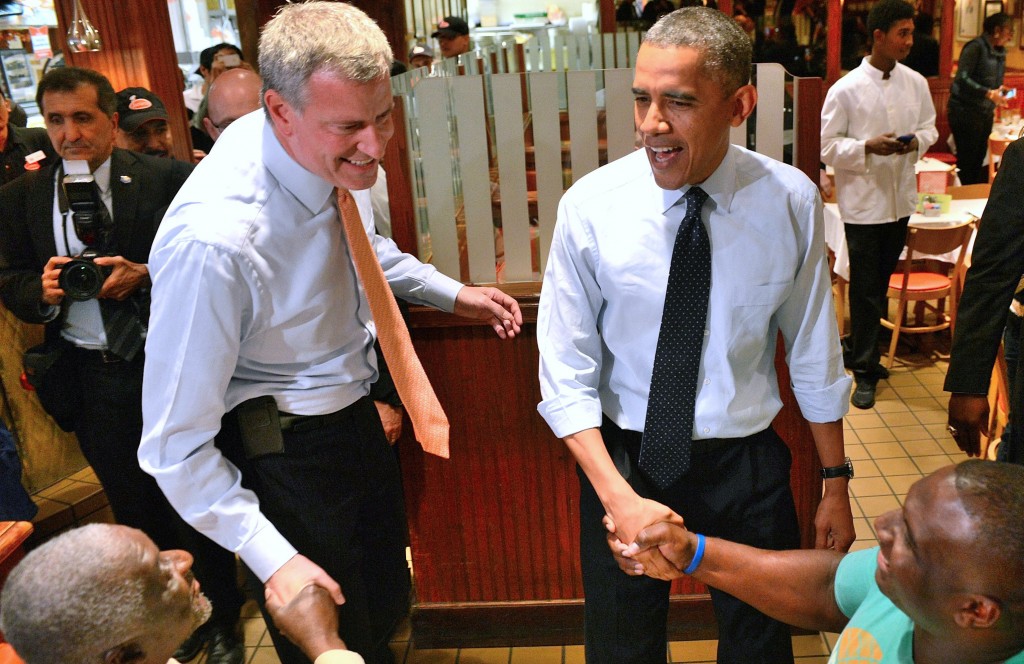 With Bill de Blasio set to become the first Democratic mayor in 20 years according to the latest polls, Hamodia presents some of his positions on important issues gleaned from a pre-primary interview with Hamodia, as well as quotes in public forums, debates and interviews with other media outlets. The information was organized as responses to the questions below, which were emailed to the candidate’s campaign.

What would your policies be to keep crime down while not permitting a special NYPD focus on minority neighborhoods? Specifically, will crime fighting capabilities be compromised if it conflicts with what you consider discrimination?

Bill de Blasio has been one of the firmest opponents of police tactics that focus on minority neighborhoods, something Mayor Michael Bloomberg and Police Commissioner Raymond Kelly say is necessary since that that is where crime is rampant.

He specifically is critical of the stop-question-frisk tactic, under which police stop and question someone with a suspicious bulge in his pocket and moving furtively. They then sometimes search the person if circumstances warrant it. De Blasio’s stance on stop-question-frisk, together with images of his African-American wife and two children, are credited with his overwhelming support in the black community.

“Stop-and-frisk done appropriately, done in response to a specific crime and a specific suspect suspicion, is appropriate,” says de Blasio. But he would act to “greatly” reduce stops, and says that the closer the police-community relationship is, the more they will get tips from the community. He also wants each precinct commander to decide locally how many stops to make, rather than the current quota system.

If you do not get the tax rate hike from the legislature, or if you get it and your pre-K program costs more than expected, are you still committed to pre-K and to restoring the afterschool childcare vouchers removed from the budget in 2010?

De Blasio’s signature issue in the mayoral race, one which has garnered national attention and a chorus of celebrity endorsements, is his call for a tax hike on those earning more than $500,000 a year to fund a free pre-school program.

The city income tax rate on these taxpayers would go from 3.87 to 4.4 percent. However, any rate hike requires the approval of the state legislature. Although Governor Andrew Cuomo has endorsed de Blasio, he has made it clear that he was not anxious to raise taxes in a state that already has the highest rates in the nation.

Additionally, Cuomo and the entire legislature — including the Republican-dominated Senate, which has ruled out a tax hike — faces voters next year. That makes it unlikely they will agree to de Blasio’s proposal.

The tax hike would last for five years, after which de Blasio would seek “other resources” to pay for it. And he claims that even the business community should support him.

“They can handle it,” he says. “It will be for a brief period of time but it will have a profound effect on the future of the city. This proposal is fair, good for the future of the city — I think even people in the business community acknowledge it — and people who know me well know I am reasonable and they can work with me.”

For the Orthodox community, the idea is not particularly attractive or relevant. Although de Blasio promises to restore after-school vouchers using the extra resources, only public pre-schools are eligible for the program. He has said that even charter schools, publicly funded but privately run schools that have been pushed by Bloomberg, would not access city funds.

But de Blasio says that everyone gains from a more educated city.

The Jewish community is extremely concerned with the current administration’s recent attempt to infringe on fundamental religious liberties, the unprecedented passing of regulations regarding metzitzah b’peh.

“The first concern for all of us is the safety of our children,” he says. “I think we can come up with a much better approach together, city and community together. And I would upon being elected start that immediately so that we can implement by the time I come into office an agreed upon approach that would really focus on the health of children and respect tradition.”

De Blasio said that he has worked extensively in the past with Agudah — he calls Agudah’s executive vice president Rabbi Chaim Dovid Zweibel “someone I have immense respect for… the most intelligent public policy person I have ever worked with, and he’s someone I admire greatly.”

He is confident he would be able to work something out, but he wants to leave the form in place for now “because we have to have something.”

From your front row vantage point in the Dinkins administration, do you feel he earned his dismal place in NYC history books? Also, what were your responsibilities in 1991 during the riots in Crown Heights?

Bill de Blasio began his career in city government in 1989 as a political aide in David Dinkins’s administration.

Two years later, as the Crown Heights riots broke out, anxious Jewish leaders burned the phone lines to Gracie Mansion, asking where the police were. The calls went to deputy mayor Bill Lynch, de Blasio’s immediate boss, who was later blamed for keeping Dinkins uninformed of just how desperate the situation was.

De Blasio’s name does not appear in the official state report of the riots, and he told the Daily News for their Oct. 19 edition that at the time he was involved in policy only “in a minor capacity.” He says that as mayor he would have handled the situation differently.

“I was in City Hall working on the staff,” de Blasio told the News on Oct. 21. “I did receive calls from concerned community leaders around the city and that’s all … I was not on the site. I came away with very strong views but I did not participate directly. I just need to be crystal clear about that.”

Hamodia was told by several people, including one who was in city government at the time, that de Blasio was indeed a junior aide and was not involved in the botched response to the riot, which cost the life of Yankel Rosenbaum, Hy”d, a visiting student from Australia, murdered in cold blood by a mob of blacks rampaging through the streets, shouting “Kill the Jew.”

The Jewish community is wondering why you have not appeared in Jewish neighborhoods since the primary, a question highlighted by your opponent’s frequent visits.

De Blasio’s campaign said that the candidate would not be doing any media interviews , and his campaign appearances would be extremely limited.

De Blasio had assured Hamodia in his pre-primary interview that he will have an open door to the Orthodox community, whom he credits for getting his political career started.

People who worked with him during his eight years in the council recount the numerous nights he spent with them taking care of issues, or the time he stayed until late Friday night to ensure the continuation of childcare vouchers. In 1997, he helped broker a one-day break in the Broadway union strike to allow Ohel’s annual fundraiser show to go on.

“I think, given the depth of my relationship with the Jewish community, given the 12 years nonstop of working together on things like childcare vouchers, Priority 5 and Priority 7 … what we’ve done on behalf of special education and summer camps,” he said before the primary, he should be excused for campaigning elsewhere.

He also said, “I will be in effect the reverse of Bloomberg. You know, Bloomberg was often distant from the community. The only time he showed true interest in the community was when he needed votes, most notably in 2009, and then he turned around and took away the childcare vouchers to say thank you.

“Every community gets the same flow of information. So we believe that the message that I’m putting out there in terms of all five boroughs … people in the Jewish community are hearing that message loud and clear. What matters in political campaigns first and foremost is, do you believe in what your program is and do you project that clearly and consistently. It is less about do you show up for a couple of neighborhood events and more about what are you saying to the whole city.”