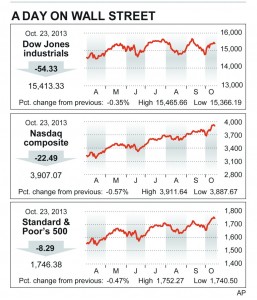 Caterpillar, which makes mining and construction equipment, is considered an important barometer of the global economy. The plunge in Caterpillar’s third-quarter profit discouraged investors and stalled a two-week surge in the stock market. Energy stocks dropped as the price of oil fell to its lowest in almost four months.

The S&P 500 had surged 6 percent over the previous two weeks. The index climbed as lawmakers inched toward a deal to end a 16-day partial government shutdown and avert a potential U.S. default. Investors also became more convinced that the Federal Reserve will refrain from easing back on its economic stimulus until possibly next year.

Broadcom was another company that disappointed Wall Street with its third-quarter earnings. The communications chip maker fell 78 cents or 2.9 percent, to $26.36, reported adjusted results that exceeded Wall Street expectations, but the company’s earnings forecast was weak.

It wasn’t all bad news from corporate America.

Boeing raised its profit estimate for the full year because deliveries of commercial planes continue to accelerate. The plane maker’s stock climbed $6.54, or 5.3 percent, to $129.02.

While some earnings disappointed investors on Wednesday, most are reporting profits that are better than expected. About sixty percent of the companies in the S&P 500 that have reported third-quarter earnings have beaten analysts’ forecasts, according to data from S&P Capital IQ.

S&P 500 companies are expected to report earnings growth of 3.5 percent for the July-to-September quarter over the same period a year earlier. Revenue is expected to rise by 3.9 percent.

In government bond trading, the yield on the 10-year Treasury note fell to 2.50 percent from 2.51 percent late Tuesday.

The yield, which is used to set interest rates on many kinds of loans including mortgages, is the lowest it’s been since mid-July. It has fallen 0.5 percent since reaching a high for the year of 3 percent on Sept. 5. Investors have bought Treasurys, lowering  their yield, as the outlook for economic growth has weakened since the government shutdown.

The slowdown has an upside, though. Many analysts and economists expect the Fed to continue its economic stimulus until next year to help the economy maintain its momentum after the government shutdown. The central bank is currently buying $85 billion in bonds every month to keep interest rates low. That stimulus program has underpinned a 4 ½ year rally in stocks.

This article appeared in print on page 8 of the October 24th, 2013 edition of Hamodia.