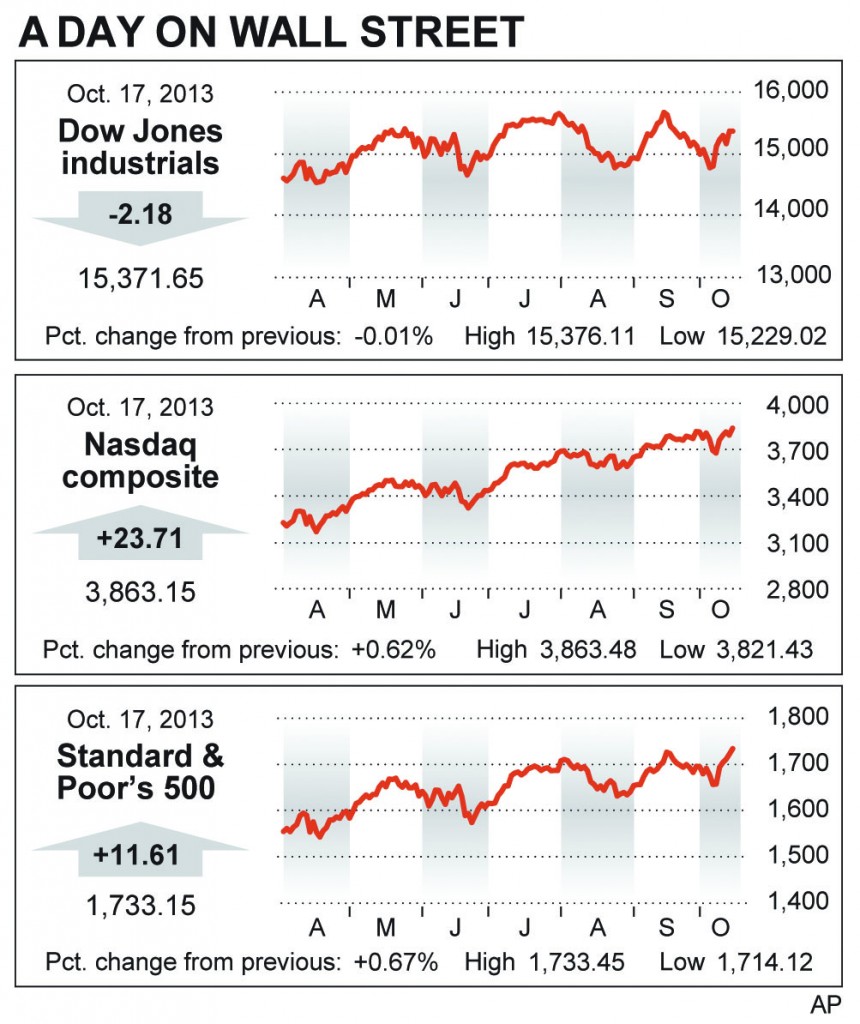 The stock market hit an all-time high Thursday as investors put the government shutdown and debt ceiling crisis behind them and focused on corporate earnings.

The market rose throughout the day as investors got back to focusing on corporate earnings and economic data. American Express and Verizon rose the most in the Dow Jones industrial average after reporting earnings that beat expectations from financial analysts.

Goldman Sachs also weighed down the index. The investment bank’s revenue fell sharply as trading in bonds and other securities slowed. Goldman fell $3.93, or 2.4 percent, to $158.32.

The focus on earnings is a change of pace for Wall Street, which had been absorbed in Washington’s political drama over the last month.

Now that the U.S. has avoided the possibility of default, at least for a few months, earnings news is expected to dominate trading for the next couple weeks. So far, only 79 companies in the S&P 500 have reported third-quarter results, according to S&P Capital IQ. Analysts expect earnings at those companies to increase 3.3 percent over the same period a year ago. 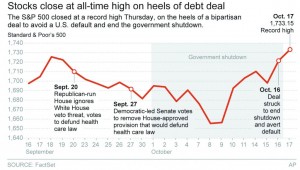 “I don’t think we can completely close the door on the debt ceiling chapter just yet, but we can get back to the stuff that really matters,” said Jonathan Corpina, who manages trading on the floor of the New York Stock Exchange for Meridian Equity Partners.

Market analysts think the 16-day partial shutdown of the government caused billions of dollars of damage to the economy. Government employees were furloughed, contracts were delayed, and tourism declined at national parks.

There remain broader concerns that Democrats and Republicans won’t be able to draw up a longer-term budget. The deal approved late Wednesday only permits the Treasury Department to borrow through Feb. 7 and fund the government through Jan. 15.

“The agreement represents another temporary fix that pushes fiscal uncertainty into the early months of next year,” Wells Fargo analysts said.

Despite the worries, signs of normalcy returned to financial markets Thursday.

The one-month Treasury bill was back to trading at a yield of 0.01 percent, about where it was a month ago, and down sharply from 0.35 percent on Tuesday.

Usually a staid, conservative security, the one-month T-bill was subjected to a wave of selling at the beginning of the month. Investors feared the T-bill would be the first piece of government debt to be affected by a U.S. default if the debt ceiling was breached and the federal government could no longer pay its obligations.

The yield on the more closely-watched 10-year Treasury note fell to 2.60 percent from 2.67 percent Wednesday.

Among other stock moves: