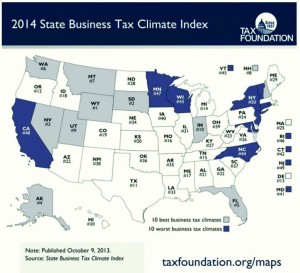 The national Tax Foundation said Wednesday that New York is the worst state in the nation when comparing the complexity of tax codes and tax rates, marking the second consecutive year the state was at the bottom. The ranking shows New York is ranked 50th, with their individual income tax ranking at 49th place.

“One of the biggest hindrances to New York’s score is the progressive and high individual income tax,” said the Foundation’s Scott Drenkard. “It is pretty high for the region and certainly high against the rest of the country.”

By contrast, the top three states — Wyoming, South Dakota and Nevada — have no corporate or individual income taxes. Gov. Andrew Cuomo, who established two tax commissions that will recommend ways to simplify the tax law and cut taxes, cited other studies showing New York with a far friendlier business climate.

This article appeared in print on page 4 of the October 10th, 2013 edition of Hamodia.