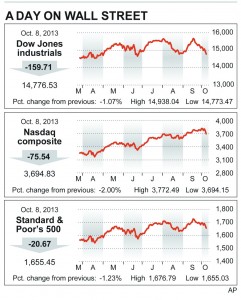 The stock market’s slow bleed got a little worse Tuesday.

The decline is the result of squabbling in Washington over raising the nation’s debt limit and a government shutdown that has dragged on for more than a week. Moderate losses for the stock market in the first days of the shutdown have accelerated this week as the U.S. has moved closer to an Oct. 17 deadline for lifting the government’s borrowing authority.

Stocks opened flat, moved steadily lower and slumped in the final minutes of trading Tuesday. The loss added to a three-week decline that has knocked the Standard & Poor’s 500 index down 4 percent since hitting a record high on Sept. 18.

Swings in the market will likely increase the closer the U.S. gets to the debt deadline without a resolution, said Randy Frederick, Managing Director of Active Trading and Derivatives at the Schwab Center for Financial Research.

“Virtually everyone expects that there will some sort of a resolution,” Frederick said. “But I wouldn’t be surprised if it only came right before the last minute.”

Nervous investors also dumped short-term government debt as they worried that the standoff in Washington could jeopardize the nation’s ability to pay its bills, including interest on its debt, as early as next week if Congress doesn’t raise the borrowing limit.

The yield on Treasury bills maturing in one month soared to 0.28 percent, hitting its highest level since the 2008 financial crisis. The yield was 0.15 percent on Monday and close to zero at the beginning of October.

The yield, which rises as the price of the notes fall, has surged as managers of money-market funds become more wary of holding short-term government debt that matures shortly after the debt deadline.

There were other signs of increasing investor nervousness.

The VIX index, which rises when investors are getting more concerned about stock fluctuations, climbed to its highest level of the year.

U.S. companies will start reporting earnings for the third quarter in earnest this week, giving investors something else to think about other than Washington.

Aluminum producer Alcoa, which was recently removed from the Dow Jones industrial average, said Tuesday that it had swung to a profit in the third quarter despite lower aluminum prices, as it was helped by demand from auto makers and by cost-cutting moves.

JPMorgan and Wells Fargo are also among the companies releasing earnings this week.

The yield on the 10-year Treasury note was little changed at 2.63 percent. The yield on the longer-term note has fallen in the past month, suggesting that investors see any potential default as a short-term phenomenon and are predicting that economic growth will remain subdued in the longer term.

Stocks also slumped the last time that the U.S. came close to hitting its debt ceiling in the summer of 2011. The S&P 500 dipped 5 percent between the start of July and Aug. 2 of that year, when President Barack Obama signed into a law a bill that raised the debt ceiling and promised more than $2 trillion in cuts to government spending over a decade. Stocks extended their slide after S&P cut its rating on U.S. government debt on Aug. 5.

Analysts point out, though, that the global economy was in a far more fragile state two years ago than it is now. Europe was still in the throes of its debt crisis, the U.S. economic recovery was less strong and the U.S. budget deficit has shrunk since then.

This article appeared in print on page 32 of the October 9th, 2013 edition of Hamodia.